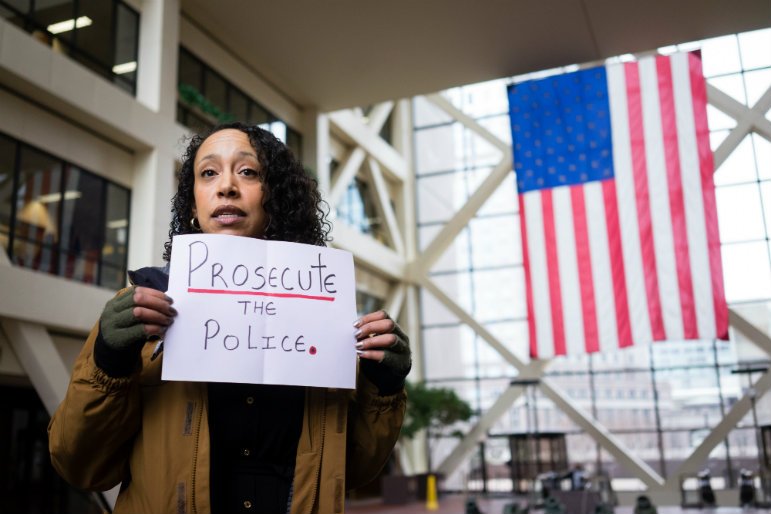 Michaela Day addresses a crowd of protesters during the sixth weekly #FreemanFriday protest at the Hennepin County Government Center. Photo by Annabelle Marcovici.

Police abolition is not a topic that fits the traditional confines of Midwestern small talk.

So, when I asked about two dozen people at bus stops, in coffee shops, at the library and some acquaintances if they would share their feelings about the idea of a police-free Minneapolis, it’s not too surprising that few people were willing to talk to me at all and none of those who would would go on the record.

Some said they didn’t know enough about the topic. Most of the people I approached listened politely and then quickly declined. A few others’ eyes glazed over after hearing the word “reporter.”

One man answered my questions openly. He said he liked the idea of no police, but that he lives in a neighborhood near Lake Street with a lot of crime. He couldn’t envision his community without the police presence there. When I asked for his name, he wondered aloud to his coworker if he wanted his name attached to this.

“Do you want your boss to see that?” his coworker asked.

Ironically, public discourse about policing and reform is precisely something MPD150, a Minneapolis collective working toward a police-free community, wants to engage with and change.

Police abolition is not a new concept, having roots in the ideas of the ongoing movement for Black lives, and even the Black Panthers. Working off of that tradition, MPD150 believes a police-free city is possible when the community is empowered to address its unique public safety issues and residents’ needs.

The collective, comprised of about five dozen organizers, activists, researchers, artists and social services professionals, came together in Spring 2016 as the Minneapolis Police Department (MPD) observed their 150th year anniversary. For their first project, they conducted a performance review of the MPD, which they presented to a room of about 300 on Nov. 18 said Ricardo Levins Morales, local artist and core member of MPD150.

“The response has been far more receptive than I expected,” he said.“Until now, even raising this [topic of police abolition], the reply is ‘Oh, that’s for crazy uncle in the attic talking,” he said.

The report, titled “Enough is Enough: a 150-year Performance Review,” dives into MPD’s often violent history, explores the effectiveness of their social service function and offers alternatives to the continuation of a police state. 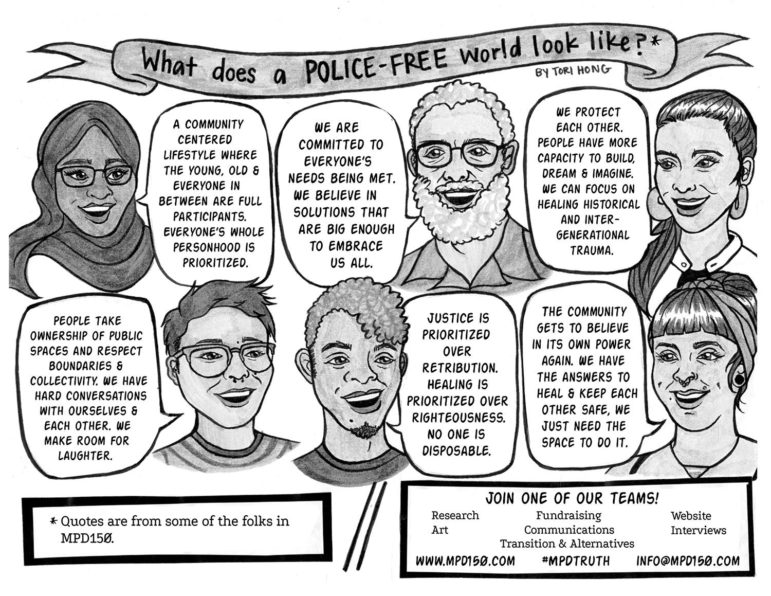 Before publishing the “Enough is Enough” report, MPD150 released a zine to encourage conversation around a police-free society. Illustration by Tori Hong courtesy of MPD150.

The performance review, a work-in-progress and available on MPD150’s website, tapped the “collective community memory,” Levins Morales said, in addition to historical documents, like police reports and news articles. The result, he said, “struck some real gold veins.”

Essentially, the report set out to answer: what has 15 decades of policing in Minneapolis taught us?

“[That] it doesn’t make sense to renew them for another 15,” Levins Morales said. “Our whole intention is to flip the script…Not that abolition is naive but that police continuation is naive.”

In the U.S., policing began as slave patrols, often comprised of slave-owners who forced escaped enslaved people back into bondage. Several of these slave patrols evolved into police departments, such as Charleston, South Carolina’s police force, according to MPD150’s report.

“The police are a continuation of the system of racial control,” Levins Morales said. “We’re still fighting the civil war.”

Although the MPD did not directly stem from a slave patrol, Levins Morales said, the department has a thorough history of violence against Black and indigenous people, as well as being used as a political tool to break up labor union strikes, the report outlines.

In recent years, police brutality in the Twin Cities has grabbed national headlines. Jamar Clark was shot and killed by MPD officers on Nov. 15, 2015, leading to 18 days of occupation at the police department’s Fourth Precinct. Philando Castile was shot and killed by former St. Anthony Police Officer Jeronimo Yanez at a traffic stop on July 6, 2016. Minneapolis Police Officer Mohamed Noor fatally shot Justine Damond on July 15, 2017 after she reported a possible sexual assault near her home.

Some laws and ordinances enforced by police are written in ways that legally allow police officers to discriminate – whether acknowledged or not. For example, the Minneapolis City Council repealed spitting and lurking ordinances in June 2015. Before they were repealed, these ordinances were an excuse to give police the power to stop, frisk and arrest people for being in public spaces.

According to a case study conducted by the American Civil Liberties Union, Black and Native Minneapolis residents are nearly nine times more likely than white Minneapolitans to be arrested for low-level offenses, such as lurking, trespassing and disorderly conduct.

Castile was pulled over for traffic stops 46 times before  Yanez fatally shot him in Falcon Heights. Molly Glasgow, a core member of MPD150, acupressurist and co-founder of Restoring Power MN, said even if these laws are defined as a “low-level offense,” the stakes are high.

“For some people a traffic stop is an inconvenient ticket. For others, it’s food for a month and for some, it could mean death or arrest,” Glasgow said. “That creates an environment of constant fear.”

When Tori Hong first heard of police abolition, they had internal battles about whether or not the idea made sense. But then, they said they realized that reforms won’t alter a system which was created to re-enslave Black people and recolonize native people.

“There’s no fixing a system based on that,” Hong said.

Hong compared police reforms to building onto a house that has a poor foundation. You can hammer a piece of wood here and there, they said, but that doesn’t change the fact that the shaky foundation puts the whole house at risk to collapse.

Glasgow said a police-free community would be a huge step in addressing the generational trauma and constant fear people of color and indigenous people feel as a result of decades of police violence against their communities.

“It’s not this imaginary painting. We would have a community that would be taught and trained to address these issues as they come up,” she said. “We would protect each other.” 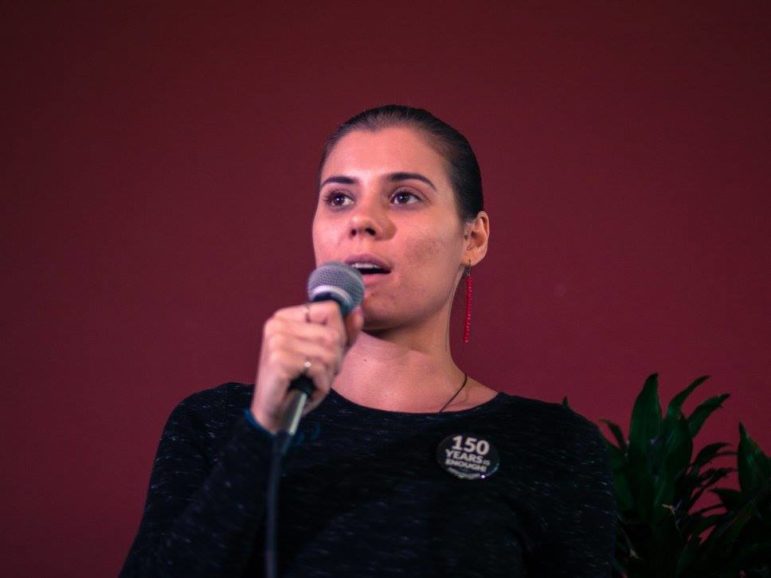 However, not everyone in the community is on board and for some, police abolition is too idealistic.

Jamael, a Black Minneapolis resident, agreed to go on record under the condition that his last name be dropped because of his job. Jamael said MPD’s reforms have moved in the right direction but have “not gotten at the central element.”

Meaningful, fundamental reforms, he said, would remove officers’ guns in situations where they are unnecessary, in addition to withdrawing police from responding to emergencies where another professional could be more effective.

A social services team or an arbitrator is better equipped to address and de-escalate domestic violence and mental health crises, he said. Even so, Jamael said abolition seems out of reach considering our capitalist society.

“As long as there’s property, there needs to be someone to coerce that property,” he said.

Levins Morales combats naysayers by being realistic that such a fundamental change in how society responds to and addresses problems would take time to implement safely.

“There’s no naiveté here,” Levins Morales said. “You need transitions no matter how dysfunctional the current system is.”

Over the last several years, MPD instituted a few reforms including implicit bias training and body cameras. However, MPD quickly realized this new technology required more policies for use after officers who killed Damond did not turn on their body cameras. In response, Chief Medaria Arradondo altered the body camera policy. MPD officers now have to turn their body cameras on when responding to every call.

“Even the best-intentioned police chiefs are powerless to the system,” Levins Morales said. “For [reforms] to be powerful, they have to be attached to a narrative for how we solve the problem.”

According to the 2016 police budget, money for reforms included: $200,000 for increasing the number of sworn police, $1 million for body cameras, with $400,000 of that coming from the State; $173,000 for additional employees to help implement body cameras, $305,000 for implicit bias, procedural justice and crisis intervention training and $300,000 for the MPD to hire a recruit class.

The 2017 MPD budget included: $1.3 million for the hire of 15 new police officers (three of which were delegated to a police/mental health worker crisis pilot program); nearly $1.1 million to hire 20 part-time Community Service Officers, $325,000 to “support body camera technology,” $1 million for training, $200,000 for a pilot police/mental health co-responders model and $10,000 to improve the process of reporting officers for police conduct.

Of these noted above, Minneapolis has spent nearly $5 million over the last two years on police reforms and additional officers- pocket change when compared to MPD’s annual budget, which has steadily increased over the last several years. Mayor Hodges’ 2017 budget granted $163.2 million to the MPD, an increase of 3.4 percent from the prior year.

In an economy characterized by “austerity,” Levins Morales said community resources are underfunded—if federally or state funded at all. MPD150’s report states that funding for the police department and police reforms could be put to better use in the hands of the community.

“The answer to policing can’t be separated from what’s hurting our communities,” Levins Morales said. “When people’s needs are not met in a fundamental way…the predictable responses are crime, protest and mental health crisis.”

In Minneapolis, there is a relationship between residents living in poverty and higher crime rates.

The Third Precinct in Southeast Minneapolis has a crime rate more than twice Southwest Minneapolis’ Fifth Precinct at 27.82 percent, according to MPD’s Data Dashboard. Precinct Three includes the Phillips neighborhood, where 43.9 percent of residents have an income below poverty, and the Powderhorn neighborhood, where 23 percent of residents’ income is below the poverty line, according the Minnesota Project Compass Website.

MPD150’s platform would redistribute much of the money spent on policing to the community to be used for increasing access to fundamental needs.

Minneapolis has tentatively explored this method of improving public safety.

However, communities can not rely on grant funding to address public safety, Levins Morales said.

Another issue of modern day policing, is that police serve a social service function by responding to mental health crises and domestic violence; however, they are not trained like social service professionals.

Moving forward, MPD150 will use the report as a launching point, an inspiration for public arts projects, films, social media and other vehicles to disseminate the information in the report to the community. The report, Levins Morales said, is just one facet of a far-reaching approach to the problem of policing and police violence.

“We want to naturalize these ideas so the change really comes from the community,” Levins Morales said. “That’s a pretty game-changing narrative.”

People tend to think of police-free movements as militant, Hong added, but to them, police abolition is an opportunity to imagine how the ideal community could operate and the concrete actions it would require to get there.

“It’s about care, compassion, abundance and resources being shared and spread,” they said.