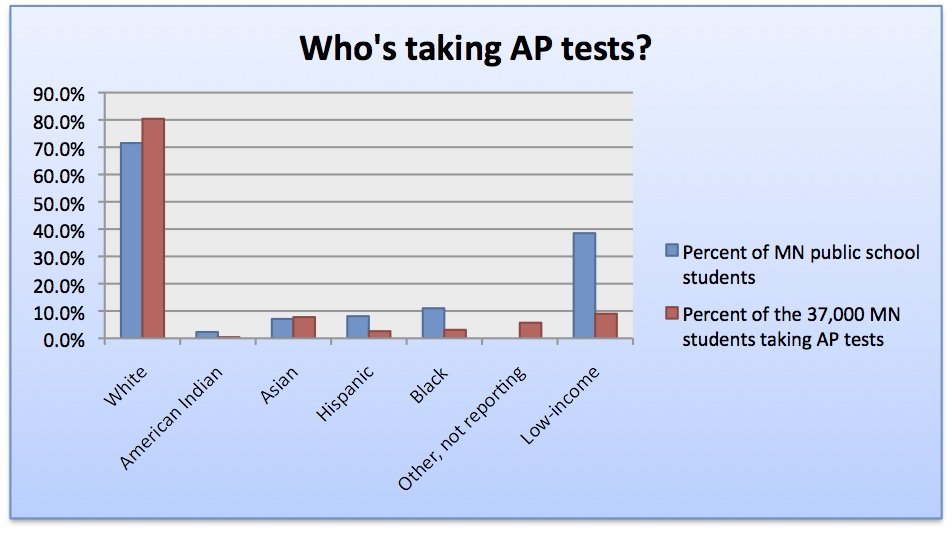 IB has some programs for elementary and middle years students, which received payments in addition to those listed above for high schools. Information in graph from MN Department of Education 2012 Rigorous Course Taking report to legislature.

Each year, more and more students in Minnesota are taking advantage of Advanced Placement (AP) and International Baccalaureate (IB) programs in public schools, which provide opportunities for students to partake in rigorous coursework and possibly earn college credit. But even as these programs become more popular, the costs put strains on cash-strapped schools, and though the numbers of participating students of color are increasing, these programs still disproportionately serve white students.

According to the report, schools receive funding from the state to subsidize the cost of exams and teacher training related to the programs. MN Statute §120B.13 provides that, “The commissioner shall pay all examination fees for all public and nonpublic students of low-income families, as defined by the commissioner, and to the limit of the available appropriation, shall also pay a portion or all of the examination fees for other public and nonpublic students sitting for an advanced placement examination, international baccalaureate examination, or both.”

According to Keith Hovis from the Minnesota Department of Education, the average AP test costs $87. In Minnesota, $4.5 million has been allocated to help cover those costs for students, with the state offering $50 per exam.

In 2012, 37,363 students took AP tests, of whom 67 percent received a score of three or higher. In comparison, 2,799 students participated in IB Diploma programs, taking 6,144 exams and earning 191 diplomas, according to the MDE report.

According to the IB website, the student registration fee, paid once for each student who takes an IB exam, is $151. In addition, another fee, paid for each subject a student is tested in, is $104 per subject.

Unlike AP courses, which are individual courses designed to mirror college courses and provide an opportunity to earn credit by taking a test at the end, the International Baccalaureate (IB) Diploma program is an intensive two-year program offered in high schools and run through a non-profit organization based in Geneva, Switzerland. In Minnesota, 21 high schools offer IB, according to the Office of Higher Learning.

According to a report by the College Board, the number of Minnesota students who graduated from high school having taken an AP exam nearly doubled, from 9,256 students in 2003 to 17,842 in 2013. In addition, more students are getting a score of three or higher on at least one test (11,497) now than the total number of students taking the tests in 2003, which was 9,256.

Of all the AP tests, history and social sciences are the most popular for Minnesota students, followed by math and then English. Only about nine percent of students take the AP science tests, and less than two percent take AP arts or world languages tests.

Still, when you look at the numbers of students who are taking the AP tests, disparities persist. The number of students of color taking the AP test is abysmally low. Only four percent of African American students in Minnesota took an AP test in 2013, and only three percent of Latino students did. For American Indian students, it’s less than half a percent and for Asian American students it’s seven percent. The percentage of white students taking an AP test has actually declined, but it’s still far higher than any other group, at 82 percent.

According to the MDE Report from 2012, 996 students of color in Minnesota took IB exams, compared to the total of 2,799 students taking the tests.

In addition, the Center for School Change report found “The number of low-income students more than doubled in AP and IB” between 2006-2011, with increases “of 137 percent in AP and 154 percent in IB.

Despite the increases, the overall number of students of color enrolled in AP and IB classes remains low.

Schools wanting to start an AP course have to submit a subject-specific AP Course Audit form and the course syllabus for each teacher of that AP course, according to Deborah Davis, Communications Director at the College Board, which administers the AP test. The college board also recommends that new AP teachers enroll in a week-long AP Summer Institute and/or full-day workshop “to receive in-depth training on the AP course and exam,” Davis said.

According to the 10th Annual AP Report to the Nation, 20.3 percent of Minnesota’s public high school graduates scored three or higher on an AP Exam, which is the 17th highest rate in the nation, above the national average, representing an increase of over 10 percent since 2003. While some schools require students get a four in order to receive college credit for an exam, many accept a three.

“If you are looking for AP Exam scores of three or higher at the administration level (or AP Exams taken in Spring of 2013 – which includes AP Exams taken by high school freshmen, sophomores, juniors and seniors), then 65 percent of all exams taken in Minnesota received a score of 3 or higher in 2013,” said Davis.

How many college credits can be earned from AP or IB depends a lot on the college or university. Augsburg will give credit for a score of three or higher on AP, for example, but not for IB courses, according to Minnesota Private Colleges. Bethel only allows eight credits total for AP and does not give college credit for IB, and Carleton accepts up to 36 credits for both AP and IB, but those credits can’t be applied toward distribution requirements.

Some colleges, including Gustavus Adolphus, MCAD and St. Catherine, have set a maximum number of credits they allow, and other schools varies on how high a test score is required to get credit. Some require a score of three on AP tests and others require a four. Others say that individual departments determine whether credit can be offered at all and, if so, what score is required.