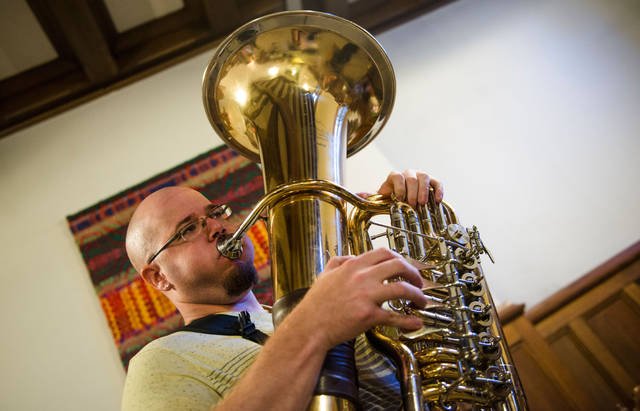 The Copper Street Brass Quintet's trombone player Nick Adragna practices with the rest of the band on Monday, Sept. 16, 2013, at Hennepin Avenue United Methodist Church. ”That 80’s Show" is the first of four concerts in their Twin Cities series and will span three decades of 80s music from the 1780s, 1880s and 1980s. (Photo by Amanda Snyder)

On a Thursday afternoon in the basement of the Hennepin Avenue United Methodist Church, he rehearsed Wolfgang Amadeus Mozart’s “Queen of the Night” aria with the four other members of the Copper Street Brass Quintet. As the piece ended, Adragna grinned, unfazed.

The quintet is a full-time job for its members — they achieved non-profit status in 2008 and now focus on making music accessible to students. Last year, in addition to shows on the side, they played more than 170 educational concerts.

“We’ll be kind of in residence for anywhere from two to four days in a school district,” French horn player Tim Bradley said.

The group plays concerts for students to showcase the brass family and encourage them to take up music on their own. To do away with some of the stigma surrounding school band classes, the quintet starts performances with Adele’s “Rolling in the Deep” before playing a Mozart tune.

“We show them that it doesn’t matter what they want to play,” trombonist Alex Wolff said. “Any instrument can play any type of music.”

In addition to short residencies, the quintet is currently working to bring private lessons and master classes to three Minneapolis middle schools through the Brass TACS (Teaching Artistic Curiosity in Sound) program.

And starting this week, they’ll break away from their day-to-day work and kick off a series of four Twin Cities concerts ranging from classical music to Christmas songs.

Copper Street has all the components of a traditional brass quintet but is constantly changing styles and pushing the boundaries of its sound.

Traditional brass quintets, first developed in the 1940s, consist of two trumpets, a trombone, a tuba and a French horn. Additionally, the group incorporates acoustic guitar, a synthesizer and drums.

Bradley writes all of the group’s arrangements, from operas to songs by The Police. Playing contemporary pieces is what first inspired the group’s unconventional approach to brass instrumentation.

The quintet uses electronic mutes to silence the brass sound of the trumpets and French horn. The mutes are connected to pedal boards, and the final sounds are projected through guitar amps.

With mutes attached, the instruments sound like electric guitars and Bradley churns out solos like Jimmy Page.

The quintet has been tinkering with this technique for more than three years. What started as a makeshift approach — including lots of duct tape — has become technologically advanced thanks to a $10,000 Metropolitan Regional Arts Council grant the group received in 2011.

The quintet’s founding members have played together since they were students in Albuquerque, N.M.

Trumpet players Hall and Corbin Dillon were in a graduate school ensemble before joining up with Bradley. Eventually, the three moved to Minneapolis.

“We decided that Albuquerque was not a good place for a brass quintet,” Hall said.

In the Twin Cities, they found two new members and a niche in the local music community for an ensemble like theirs.

Even with new additions — some members have been part of the group for just a few years — they’re close-knit. It’s something that shows not just in their personal interactions but in their musical dialogue as well.

Hall and Dillon’s trumpets somersault over one another in an eternal game of tag, refusing to play the same notes simultaneously. Wolff’s trombone and Adragna’s tuba dance the tango — one twirls while the other keeps rhythm with quick steps.

All the while, Bradley’s French horn, a playfully greedy thing, circles the others, providing its own breed of commentary.