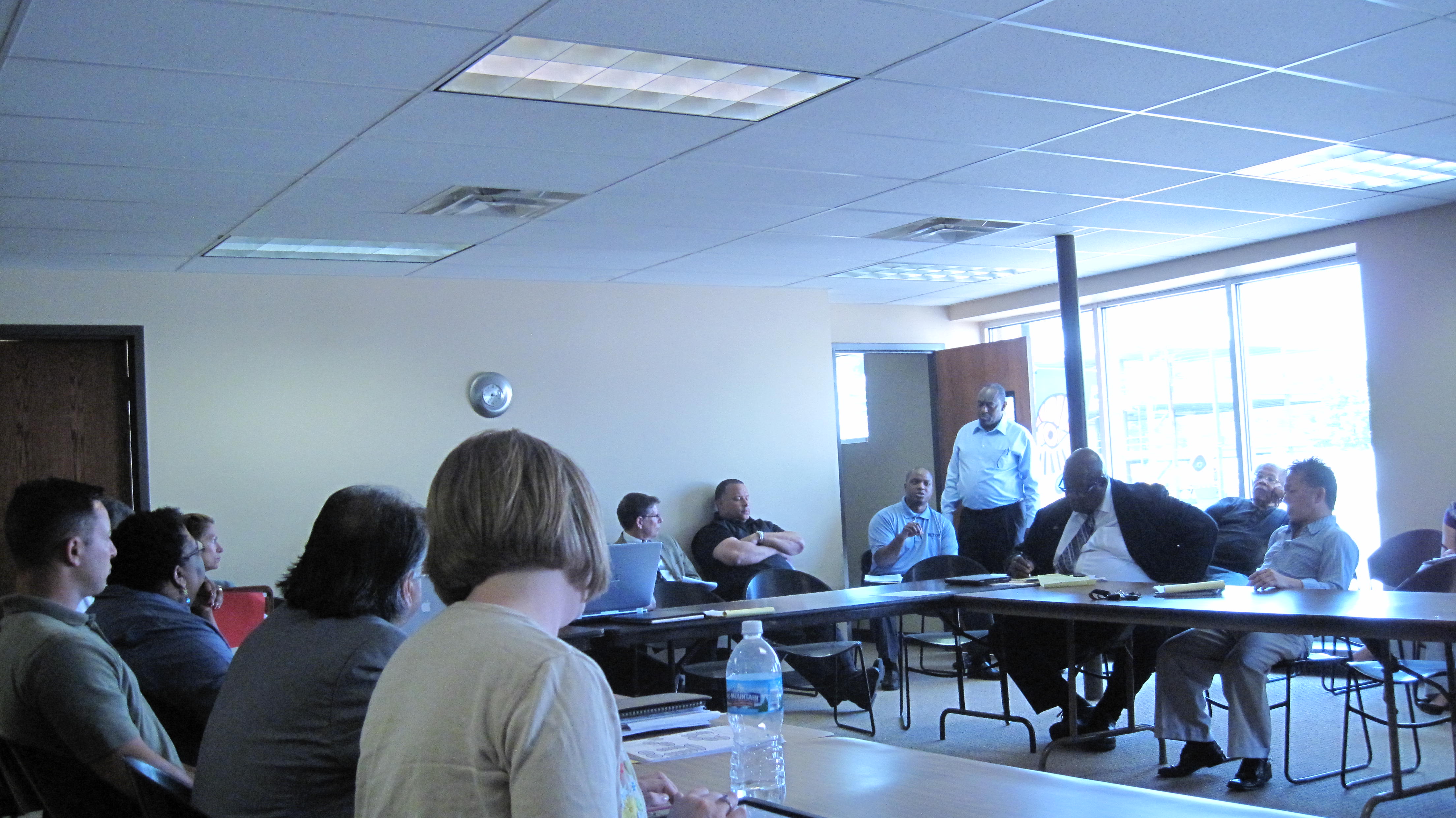 Jerry McAfee, Pastor at New Salem Baptist Church speaks at a North Minneapolis meeting on Thursday at a meeting room above the Cookie Cart.

Since the tornado hit on May 22, the people of North Minneapolis, nonprofit organizations, the faith community, the city of Minneapolis and Hennepin County have all mobilized to respond in the wake of the disaster. Neighbors have been helping neighbors, community groups have been working together, and thousands of people, from North Minneapolis and from outside it have rallied together in the recovery effort. While many leaders of the community feel that nonprofit, faith, and government entities have coordinated beautifully together, others are frustrated by what they see as the lack of inclusiveness in disaster relief efforts.

LaDonna Redmond, Senior Program Associate for the Institute for Agriculture and Trade Policy (IATP), a nonprofit, has been looking into strategy and coordination of relief efforts.  As the senior program associate for the food and justice program with IATP, she was concerned that North Minneapolis, already known as an area with limited access to food, would be even more in need.  “Our underlying concern is how this disaster will position the community for redevelopment,” she said.

What she found, in her initial meetings with North Side leaders, was that the city of Minneapolis didn’t have an emergency disaster plan for tornadoes.  “There’s a bio-terrorism plan.  At least we got that one covered,” she said. “Minnesota has more tornados than any other state.  They need a disaster plan.”

Lisa K. Dressler, Director of Emergency Management for the Minneapolis Emergency Preparedness & Regulatory Services, said that Minneapolis has an all-hazards approach to emergency situations. She said as soon as the city initiated its disaster plan, officials worked with county and state partners, as well as nonprofit groups and faith-based organizations.  In the coming weeks, she said, there will be an evaluation, but right now her department is still concentrating on the most immediate needs.

Peter Kerré, who started the North Minneapolis Post Tornado Watch facebook page and Google site to provide gather information in one place, found some resistance from city officials and heads of nonprofits when his site emerged initially as one of the first sources of information about resources for those effected by the tornado and where to volunteer.  Heads of nonprofit organizations emailed him, asking him who he was and who he represented.  Kerré described some of the emails as confrontational, and said he was confrontational back.  The Minneapolis police also contacted him, asking him who he was.  “I’m a nobody, just a volunteer,” he responded.

The information that was first released by the city of Minneapolis “barely had any information,” Kerré said.  The flier stated that those in need of assistance should go to the disaster recovery center.  “People had to wait in line for 6 hours. Then you need to go and register. I called them out.”

The bottom line, Kerré said, was that the city didn’t have “a strong and effective disaster plan.” In fact, he said that some of the North Side organizations were more effective than the city.  “The city is not working with them,” he said.  “That’s why I called them out.  The city ignored us.”  While Kerré said that many city employees have been working tirelessly, there was not an effective strategic plan for this disaster.

Kerré said that the city’s lack of strategy will eventually become clear.  “You can try to hide, but everything is slipping between the cracks.  It’s only going to get more embarrassing… It’s going to get worse.  Frustration leads to anger.”

Not all those working in relief efforts share Kerré’s view. Denise Harris, Executive Director of North Minneapolis Meals on Wheels, said the collaboration between different groups, the city and the county has been “an incredible experience… we are all working in beautiful collaboration.”  Harris’s main concern is that the energy that has been put into the disaster relief will continue as North Minneapolis residents continue to struggle.  “This is one of the poorest communities,” she said.  “The employment was bad even before the tornado.”

Richard Howell, Bishop of Shiloh Temple, said the experience has been productive.  “The biggest issue we’ve been facing is understanding who is in charge,” he said. Shiloh opened its doors right away, helping thousands of people within the first week.  It wasn’t until the Friday after the tornado that they were given a paradigm diagram, that explained where Shiloh fit in with the city’s relief plan.  “According to the paradigm, our services are basically human need,” he said.  Howell hadn’t known before then there was a list.  But, as a church, “we were not going to wait for someone to tell us to help people.”

Ben Post, the Associate Director of Urban Homeworks, one of the first nonprofit organizations that mobilized when the tornado hit, also said the organization seemed to be running smoothly.  He said that Sanctuary Covenant CDC (SCCDC) approached Urban Homeworks in order to organize a volunteer effort the day following the Tornado.  SCCDC offered their space at 1823 Emerson Ave N to meet.  “We jumped on it right away.  We threw a post up on Facebook Sunday afternoon,” Post said.  “That’s how it started.  We showed up.”

The city of Minneapolis contacted Urban Homeworks Sunday evening.  “They told us there was a briefing at the Emergency Operations Center the next morning,”  said Post.

Within 12 hours, Urban Homeworks had volunteers.  They were expecting 100 and had over 600 people.  They coordinated with the city and with the police.  “At first, they weren’t allowing people into the area because there were power lines down,” Post said. “We were coordinating with them where we could put people.”

Post characterizes the coordination from the city as being really helpful.  Also, there were local leaders from nonprofits and the faith community who all wanted to mobilize in helping.  Louis King, from Summit Academy, emerged as a facilitator, and helped organize the group of organizations put a framework together.

Overall, Post believes the city’s response has been “really great.”  “They really worked with us hand in hand.  As far as collaboration goes, the city has been responsive.”

The main challenge, he said, has been in getting the word out to people who weren’t online and didn’t have power to charge their cell phones.  Also, rumors proved a problem.  “I don’t know if that’s possible to control,” he said.  For example, there was a rumor that damage to a water treatment facility made the water unsafe to drink, which wasn’t true.  The other thing is that “things are changing so fast—it’s hard to keep track of what resources are available,” Post said.  “I’m not going to say the city did a bad job of that… There were these nimble organizations responding rapidly on the ground, the city was trying to come alongside those groups.  The city can’t mobilize as quickly as smaller groups, churches and nonprofits.”

Post said he’s hopeful that the collaborations formed between different groups will continue in long-term recovery.  “You’re talking in terms of years,” he said.  “Those discussions have already started to happen.”

Jerry McAfee, Pastor at New Salem Baptist Church, said he was frustrated with some of the communications.  He particularly was troubled with the city’s Volunteer Day organized for June 4, which he didn’t find out about until June 1.  “The majority of the volunteers are coming from other communities,” he said.  “When do you allow the people affected to play a role in uplifting themselves?”

The problem, McAfee said, is that the city hasn’t reached out to a whole group of churches and people wanting to help.  On the one hand, there’s been a good synergy within the North Side community organizations, but in terms of the overall strategy, McAfee said, “I would hope they had a holistic disaster plan where people are included.”

Bonnie Frazer, from the Voluntary Organizations Active in Disaster (VOAD) as well as United Way, which had a seat in the Emergency Operation Center, said she felt bad that some individuals and organizations were frustrated that all the volunteer spots were filled up right away for Saturday’s Volunteer Day. “Not every community would have filled up all the volunteer spots as quickly as this one did,” she said. “We live in such a caring community, people want to help.”