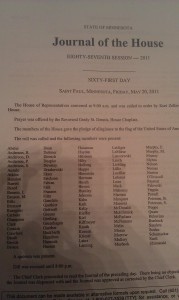 A legislative event reported by nearly every newspaper, radio and TV station in the state will not be reported in the official record of the Minnesota House. Rev. Bradlee Dean’s “prayer” on Friday that inferred President Obama was not a Christian is not included in the Minnesota House Journal as approved by the House this morning. House Speaker Kurt Zellers says he decided not to include the event because a quorum of House members were not present when the prayer happened.