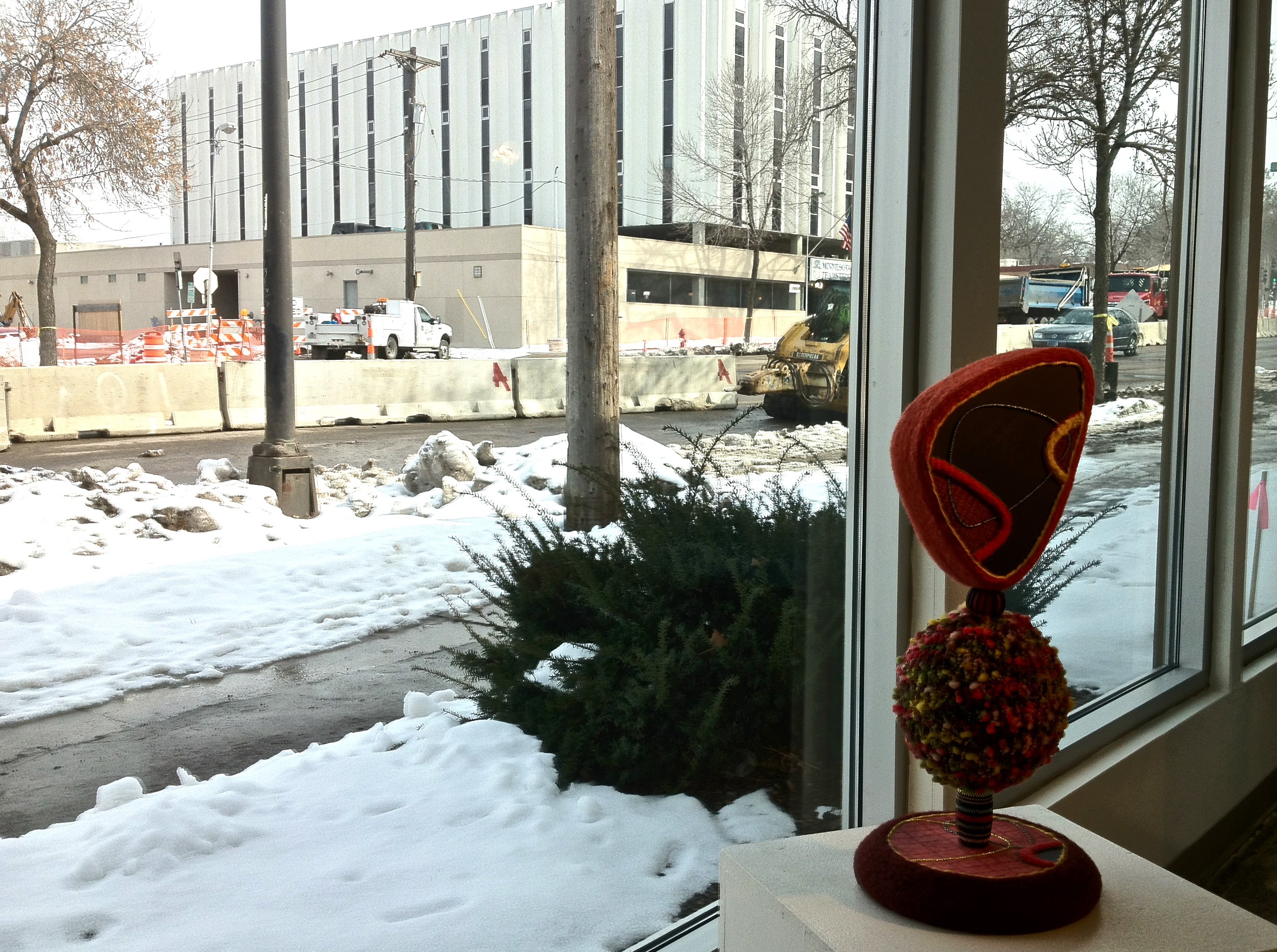 A piece from the exhibit Constructions in Concert at The Textile Center frames the view to University Avenue where there is a cacophany of construction.

There is a convergence of meaning in the term ‘construction’ when it comes to the newest exhibit at The Textile Center’s Joan Mondale Gallery (3000 University Avenue SE, Minneapolis). Constructions in Concert, an exhibit of pieces by Joyce Melander Dayton opened this week alongside busy new lightrail construction along University Avenue in front of The Textile Center located in the Prospect Park neighborhood.

Put on a pair of mud-proof boots and don’t let construction mess and parking challenges deter you from visiting this exhibit. The small show of about a dozen intensely worked pieces in wood, wool and glass beads is a fresh interpretation of a universe of women’s handwork. The use of seed beads evokes trade bead art from Africa to the Americas; European craft is evident in wool that is dyed, knitted and boiled to felt; it is also rolled and built into concave dimensions like coiled clay pots; pieces of Japanese silk are inlaid within circles and ovoids and outlined in strings of yarn or iridescent beads on backgrounds of polished, burled wood veneers.

The round-shaped, three-dimensional pieces hang on the walls in groups, some in rows much like musical notes along a staff. Their circular lines and shapes, intermingled, suggest the musical themes of the artworks’ titles (as well as the fact that the artist is an accomplished pianist): Allegro Non Troppo, Glissando and Gracenote. The work also reminded me of pebbles and water with the bubbling round shapes laid out randomly like pebbles in a stream or as one piece suggests, islands in an Archipelego. Melander Dayton’s interest in pattern is evident in all the variations presented.

A preview opening for the event took place on Thursday evening, March 1. Melander Dayton, who lives and works in Santa Fe, New Mexico was on hand to greet a crowd of about 150. Governor Dayton, (Melander Dayton is married to Governor Dayton’s cousin), was in attendance in addition to other dignitaries such as Joan and Walter Mondale and Margaret Miller, The Textile Center’s executive director. The official opening was the following Friday evening.

Melander describes her evolution from painter to textile artist as a delightful one. She has studied and been inspired by folk art and taught herself how to weave, felt, embroider and do beadwork. What saves her work from being mere craftwork or overly precious decoration is Melander Dayton’s ability to use the traditional materials and methods to create work with novel appeal.

The show will continue through through April 14. Because of construction along the Central Corridor, visitors may want to call The Textile Center for updates on construction and access, 612-436-0464. Currently, the north lanes of University from Berry Street to 30th Avenue are closed until June. Two lane traffic has been reduced to one lane each way. Parking for businesses in the area is at a premium but The Textile Center does have a parking lot behind the building. The parking lot, just off Arthur Avenue, is accessible by turning on Malcolm Avenue and following Sidney Place to Arthur Avenue.