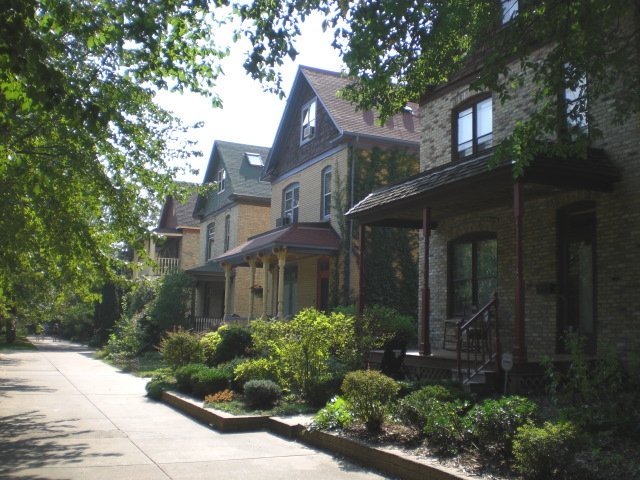 The conservation conversation hasn’t gotten off to a good start. As one of the people who has worked to craft the proposed conservation district ordinance, here’s my take.

“Urbanist vs. NIMBY” and “high density vs. low density” are the wrong frames for this discussion, just as “bicyclists vs. firefighters” was the wrong frame for the discussion about the City hiring a bicycle and pedestrian coordinator. (Both of these frames originally came from the Star Tribune, incidentally.)

Here’s one way to tell that the frame is wrong: many of the people who most strongly support the conservation district concept are also very strong supporters of smart growth. I work for Council Member Cam Gordon, who authored the proposed conservation district ordinance. I support additional density in Minneapolis for many reasons, but the most important to me is that growth in the urban core, on transit lines and high-quality bikeways, will help reduce the number of single-occupant auto trips, which will in turn fight climate change. 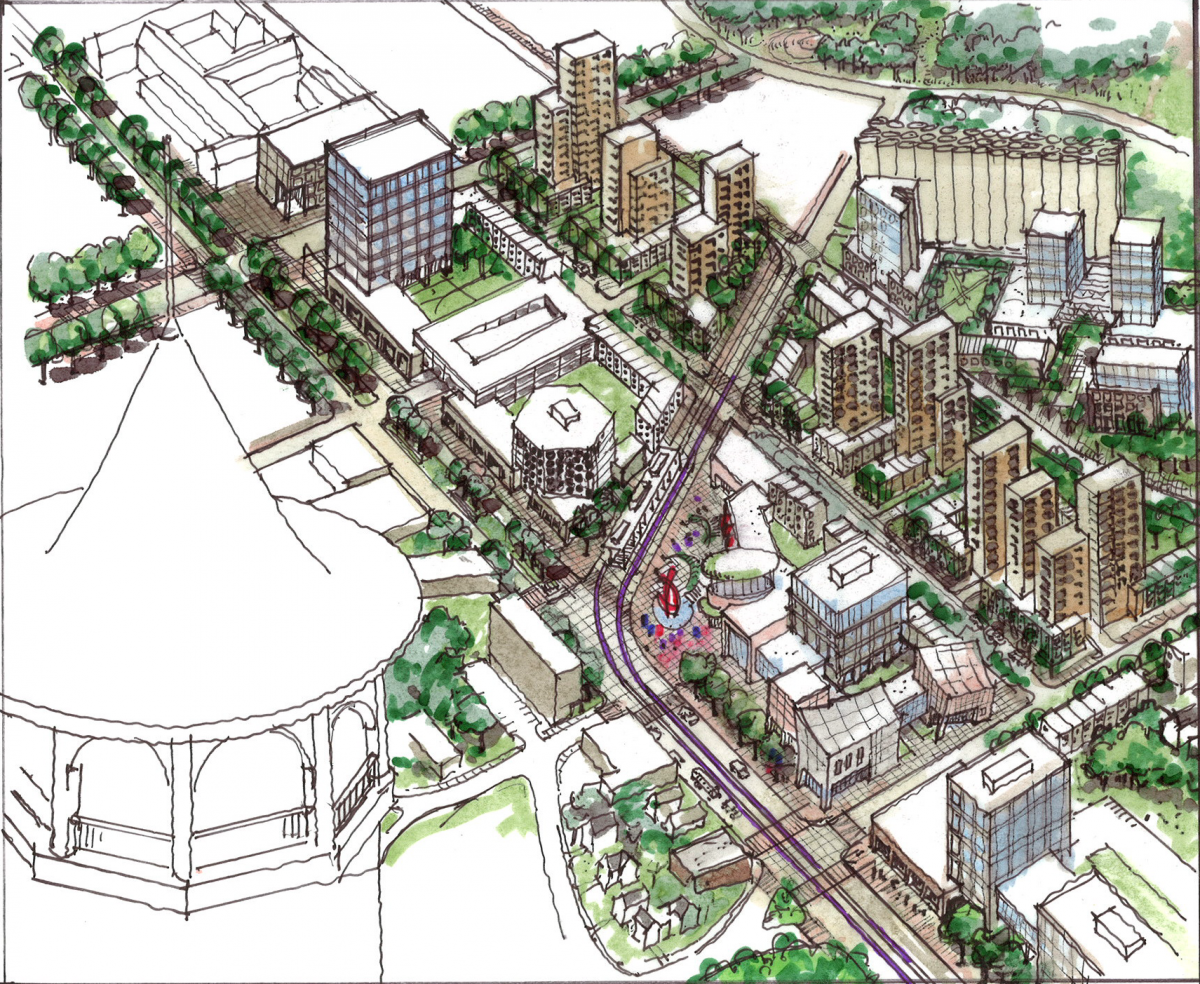 Right: Does this look like a NIMBY plan to you?

And it’s not just Cam and me: the conservation district idea was first raised by the Prospect Park neighborhood in Ward 2. Over the past few years, Prospect Park has supported major housing (WaHu, U Flats, M Flats, etc.) and commercial (Surly!) developments in their area. They have developed a proactive plan for adding thousands of dwelling units and tens of thousands of square feet of commercial space to their neighborhood, all designed to be walkable, bikeable, and transit-accessible. These folks aren’t NIMBYs: they’re out there asking for growth in their backyards. And when you look at conservation districts in other cities, you find that they are being used for a host of reasons that have nothing to do with being anti-density. One of the articles we turned to for information, Protecting Older Neighborhoods Through Conservation District Programs by Rebecca Lubens and Julia Miller, lists “mansionization, the proliferation of vacant parcels and parking lots, disinvestment, or commercial encroachment” as the concerns conservation districts are being used to address. The idea simply isn’t to try to block density.

Are some things worth keeping?

I think some places in our city are special enough that we should work to preserve what makes them great.

This is what drove the City to create a process to create historic districts decades ago. This wasn’t without controversy. Milwaukee Avenue is a great example. Today, it’s clearly a huge success: a walkable, car-free “greenway” street lined by beautiful, historic housing much denser than the zoning code would allow. But when the neighborhood fought to save Milwaukee Ave, Planning Commissioners referred to the area as “historic blight” while advocating for it all to be torn down and replaced by the sort of nondescript brick-box apartment buildings you can find on the west side of 22nd Ave S.

This is where some “new urbanist” arguments start to echo the worst of the “old urbanist” approach that reached its height in urban renewal. It’s ironic, of course, because urban renewal not only destroyed a lot of historic character, but a heck of a lot of density. Useful buildings were replaced by freeways and parking lots. The wrecking ball squad was wrong about Milwaukee Avenue and the Metropolitan building – what might they be wrong about today?It’s important to note that some of the most successful conservation districts in the country are all about protecting good urban design. Take Queen Village, Philadelphia: one of the major purposes of this district is to prevent people from building street-facing garages that degrade the pedestrian environment.

How are Historic Districts and Conservation Districts different?

Historic districts and conservation districts are fundamentally similar. Both involve property owners surrendering some of their property rights for the collective purpose of preserving what works in an area. That said, there are two main differences. First, where an historic district seeks to preserve the actual physical stuff (those particular windows, for instance) a conservation district will help new development proliferate the same character as the existing built environment (put in new windows like those). Second, where historic district guidelines are necessarily rather stringent, conservation district guidelines will be much more flexible to the needs of the particular district: is the district defined by Victorian architecture? Then the guidelines should allow changes that fit with that Victorian character. The hope is that this will provide a middle ground for people who might want to preserve some of the character of a significant area, but who aren’t willing to let the City tell them they can’t replace their windows.

Given all of that, it seems to me that people who believe that the conservation district concept is a terrible, anti-growth policy tantamount to redlining should really be agitating for the repeal of the existing historic district ordinance. It’s the same basic question, answered in a more flexible way.

There seem to be some unfounded fears about the conservation district ordinance:

It’s going to be used on every block in Minneapolis! No, it’s not. The ordinance requires that “the majority of properties embody notable attributes common to the district, including architectural styles, development patterns, scale, or landscape designs.”

This is just a backdoor way to create moratoria on development! No, it isn’t. The ordinance does not create an automatic moratorium. Yes, a Council Member could use one to try to start a moratorium, but that requires a majority of the Council – and the Council has shot down moratoria in the last few years. Again, if folks have a problem with this, they should really have a problem with the existing historic district ordinance, which allows a single Council Member to start a designation process (with no buy-in from anyone), which triggers interim historic protections.

It’ll be too easy to create conservation districts! This one is funny, because many pro-conservation-district folks are complaining that it’ll be too hard. Read the application requirements: in addition to the buy-in of 1/3 of the property owners, they’ll have to do a property-by-property inventory (including a photo of each), and “a statement addressing why a zoning amendment or historic district designation would not be as appropriate as the establishment of a conservation district.”

Zoning, especially form-based zoning, should be a set of rules that are applicable citywide. Conservation districts are by their nature – just like historic districts – driven by the particular character and significance of a specific area. It might make perfect sense in a conservation district centered in an area notable for its ramblers to require development to conform to certain rambler-esque design features; it definitely doesn’t make sense to do that same thing across the city.

One interesting example of this is the problem of teardowns and McMansions in wealthier parts of Minneapolis. Despite at least one try by then-Council Member Betsy Hodges to rein in “mansionization,” the problem continues. Are McMansions good urban design? Might it be worth preserving some smaller, more affordable housing stock?

And again, in order to get in the door, advocates for a particular conservation district will have to answer this question for their context. It’s required.

Why Don’t Renters Get a Vote?

A conservation district is essentially a group of property owners coming together to agree that they will place constraints on their property rights to conserve some valuable and significant aspect of their area’s character. In this way, it’s similar to other processes like special service districts and special assessments.

None of this is to say that there is no place in these processes (or the proposed conservation district ordinance) for people other than property owners. Renters, developers and builders, even property owners outside a given district may all participate in public meetings and public hearings.

If folks have a problem with the idea that the people who are actually surrendering some of their property rights (either through new restrictions or specific new taxation) are the ones who would have a formal vote in these cases, then they should probably also work on changing the way that we implement special service districts and special assessments – among many other things. In the case of special service districts, that will require changing state law.

A previous article on this topic compared conservation districts with redlining. That’s essentially an argument of bad faith. Redlining was a very purposeful, thought-out attempt to keep certain people out of certain neighborhoods. I was part of the Technical Advisory Team that crafted this ordinance, and I can say with confidence that no one was motivated by a desire to keep “those people” out of certain areas.

In fact, conservation districts might actually be a tool for preserving affordable housing. Sometimes the threat to an area is an influx of people with money, pushing out the existing lower-income residents – what they call “gentrification.” Some cities, like Phoenix, have turned to conservation districts specifically to preserve affordable housing where it is threatened by gentrification.

One Tool Among Many

But there are some places, like Milwaukee Avenue and the area around Tower Hill Park in Prospect Park, that are worth conserving. Property owners in those areas might not be willing to accept fairly stringent historic district constraints, but might be willing to support less rigid conservation district guidelines. I think that we can grow Minneapolis in a smart way while giving folks in these areas another tool to preserve places that are worth preserving.

At top: “Historic blight” or “one of the best streets in Minneapolis”?