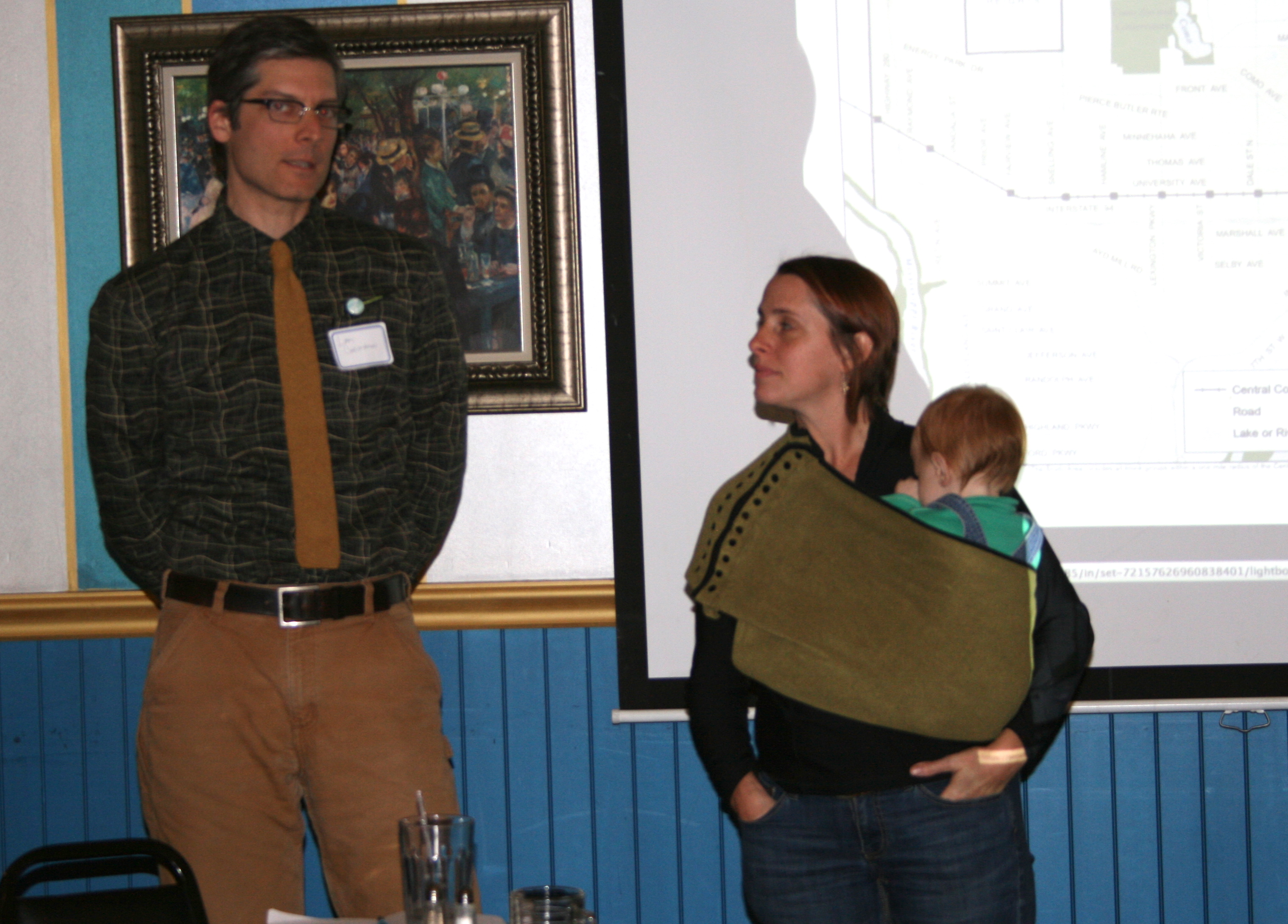 Have you ever wondered what creative placemaking is? A top-ten how-to list from Jill Mazullo, Envision Minnesota’s director of communications and development, reveals what it is by describing how to do it:

Irrigate, an artist-led creative placemaking initiative that spans the Central Corridor Light Rail line in Saint Paul, gives a more formal definition of “placemaking” as, “The act of people coming together to change overlooked and undervalued public and shared spaces into welcoming places where community gathers, supports one another, and thrives.“ Placemaking can involve temporary activities such as performances and chalked poetry, or more permanent installations such as landscaping and unique art.
Connecting over placemaking

Creative placemaking was the focus of the final Twin Cities Media Alliance Get Connected! community meeting, held in partnership with Envision Minnesota at St. Paul’s Chatterbox Pub on October 30. Mazullo’s list comes from a blog she wrote about the event, synthesizing the lessons of the Charles Avenue Friendly Streets group.

Lopez-Carlson, in his presentation, illustrated how blogging, Reddit, and other new media tools can play a major role in placemaking. He told about a recent public art project that turned Chicago sidewalks into a colossal Monopoly board game.

Formerly known as 10,000 Friends, the nonprofit now known as Envision Minnesota was founded in 1993 to address citizens’ concerns with Minnesota’s sprawling growth patterns. Envision’s mission is to promote thoughtful development, healthy communities, and sustainable land use that conserves natural areas, family farms, woodlands and water. One of many ways that it engages community members is through promoting creative placemaking projects.

Getting creative in St. Paul

In St. Paul, creative placemaking occurred when the Hamline Midway Coalition and Frogtown Neighborhood Association joined forces in 2010 to bring residents together to reimagine Charles Avenue, the site of a proposed bikeway.

As Grace Grinager reported in an earlier article, this has been the source of some controversy. For example, some residents protest that by providing protection for one street, Charles, some of the surrounding streets will become more dangerous.

Two blocks north of University Avenue and a light rail line set to open in 2014, Charles Avenue’s designation as a bicycle boulevard by the City of St. Paul prompted the Friendly Streets group to come up with a creative process that would be resident-driven, with artists playing a central role. From the start, the goal was to transform Charles “into a ‘friendly street’—one that is safe and inviting for all users, including local residents and those traveling through the Frogtown and Hamline Midway neighborhoods.”

Pavlica, a community organizer, and Christensen, an Augsburg sociology and urban studies professor, are both Hamline Midway residents. They shared details of what has transpired on Charles and what they have learned from the experience.

Taking it to the streets

City planning meetings and public hearings are where conversations about development decisions typically occur, noted Pavlica and Christensen, and these settings are not inclusive. Placemaking activities, by contrast, offer opportunities for democratic action to happen because they engage people where they live, literally “taking it to the streets,” instead of forcing residents to go elsewhere if they want to have a voice.

Friendly Streets Block Parties along Charles Avenue in the Hamline Midway and Frogtown neighborhoods, were at the core of the initiative. Christensen observed that few residents who attended the five outdoor street events would have attended a public hearing or planning meeting.

Besides being based where people live, the block parties were a draw because they were fun, interactive, family-friendly, and offered a chance for neighbors to mingle and deliberate with each other. Plus there was food from local restaurants, including Flamingo and Izzy’s Ice Cream.

Outdoor galleries offered residents an array of illustrations about what could occur on Charles. These stirred conversations and led to citizen input through votes people cast with post-it notes and written surveys they filled out. All of this data was then passed on to decision-makers.

City officials and staff at Transportation for Livable Communities, the nonprofit organization  administering federal grants for the bicycle boulevard project, have applauded the initiative for spurring such a high level of civic engagement. More than 700 people attended five Friendly Streets Block Parties in the summer of 2011. Attendees cast more than 1700 votes on a series of 24 potential design elements, ranging from speed bumps and traffic circles, to bike boulevard striping and signage, to various forms of public art. There were also 203 surveys gathered at the block parties.

Christensen reports that the group held three additional events in 2012, which increased the total estimated outreach to 877 people, and the total number of opinions expressed to over 2400. 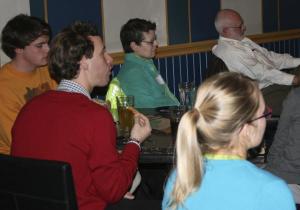 Attendees enjoy a nosh during presentations