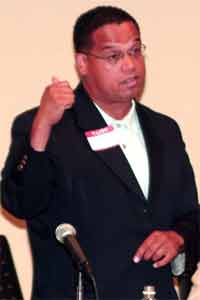 Congressmember Maxine Waters (D-CA), Chair of the House Financial Services Subcommittee on Housing and Community Opportunity joined Keith Ellison (D-MN) and Betty McCollum (D-MN) for a congressional hearing examining the foreclosure and affordable housing crisis in the Twin Cities on January 23 at Central Library in Minneapolis. They heard from two panels, which included leaders from Minneapolis, advocates, and people with firsthand experience of the crisis.

Members of the first panel agreed that there would be no end to the foreclosure crisis and housing crisis any time soon, but said that Minnesota had strong collaborations in place to deal with the problems at hand.

“We may not have led the nation in suffering from the foreclosure crisis,” said Jim Davnie, “but Minnesota has led in response to it by working collaboratively.”

Competition from private investors was a major concern for a number of the panelists. Gail Dorfman said that particularly in suburban areas, where foreclosures increasingly occur, private investors and speculators continually snatch up propertiesbefore potential homeowners seeking to use NSP funds can buy, because of the delays that occur with NSP requirements, such as environmental assessments. Dorfman said she was worried about meeting the September 30 deadline for spending the NSP funds.

Tom Streitz said that NSP funding requires properties be sold at a discount, so private investors can offer more money for the properties. “Speculators and investors have an edge up,” he said.

In response, Keith Ellison said that “we are defeating our own purpose,” if all the requirements mean that potential homeowners are losing out on buying homes.

In the second panel, housing advocates gave witness to the ways they have been using NSP funds thus far, and what more needs to be done.  Two victims of the foreclosure and affordable housing crisis spoke from their personal experience.

Chip Halbach, from the Minnesota Housing Partnership, said that while NSP is a good program, it does little to help those on the lowest rung of the economic scale.

“We need more affordable housing,” for those living in poverty and for those who are homeless, Halbach said.

Michael Dahl, from HOMELine, thanked Keith Ellison for passing tenants rights legislation, but said that it should be permanent. Dahl also said that the affordable housing crisis “predates the foreclosure crisis”, and that there needs to be an increase in the supply of affordable housing. “Congress need to pass the National Housing Trust Fund,” he said.

Mark Ireland, from the Housing Preservation Project, brought up the issue of race. “In every study I’ve seen, the foreclosure crisis and the housing crisis disproportionately impact communities of color, and people of color,” he said. “We have to talk about race.”

Richard Amos, Director of Housing Services at St. Stephen’s Human Services, testified that he formerly had been homeless for 20 years.

“I haven’t met anybody who volunteered to be homeless,” he said. “When you are homeless, they don’t look at you.” He described working with people who are homeless as a “way to grab people’s dignity back.”

Marion Anderson, a renter displaced by the foreclosure crisis, described his experience living in an apartment whose landlord had been foreclosed upon. He said he landlord began to take appliances away before bothering to let the renters know about the foreclosure. Anderson was fortunate enough to receive counsel from Legal Aid, which helped Anderson understand his rights as a renter. Still, it’s been a grueling year for him, including realizing that several of his neighbors in the building were squatters, and one a meth addict.

Christina Lauden, a Section 8 voucher resident, and mother of two children, said the voucher has allowed her to put food on the table for her girls as she looks for employment. She is currently taking online courses. She said the voucher was an investment, not a handout, because she hopes soon to get a good job and avoid being on assistance.

Ellison said that he appreciated Lauden’s perspective that the Section 8 voucher was an investment, rather than a handout. “It costs less to prevent someone from getting into homelessness than it does to get them out,” he said.

Nearly two years ago, Congressmember Waters introduced the Neighborhood Stabilization Act to provide grants to state and local governments to purchase foreclosed housing and convert it into affordable housing for low-and moderate-income families. In 2008, $4 billion was secured for NSP funds through the Housing and Economic Recovery Act, and another $2 billion came in the stimulus package last February, according to a press release by Waters’ staff. In December, an additional $1 billion in NSP funds was secured under the Wall Street reform and Consumer Protection Act of 2009.

In the first round of NSP funding, the Minneapolis-St.Paul area received nearly $14 million in grants and the state of Minnesota received an additional $39 million. Under the second round of funding, which was announced last week, Minneapolis received about $19.5 million in funding, and the City of St. Paul received $18 million.

The Congressmembers thanked the witnesses for their testimonies and said that they would use the feedback to guide their future legislation.