In her statement at the conference, Garnett McKenzie said:

“America is a nation of values, founded on the idea that all people are born equal and that we all have rights, no matter who we are or where we were born.

“But today’s immigration polices fail to uphold our American values. Instead, US immigration law is a crazy quilt of statutes, regulations, policies, and practices that separates families, allows exploitation to flourish, lets refugees fall through the cracks, makes a mockery of our notion of a fair day in court, and jails people without basic safeguards against arbitrary or inhumane detention. 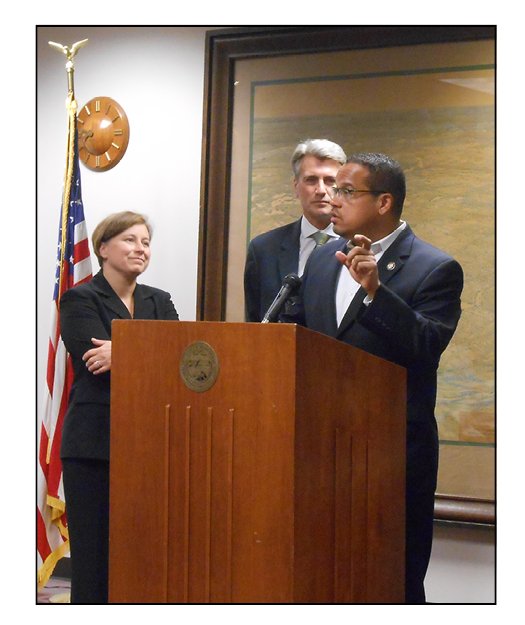 “Just one example of how far our immigration policies have departed from our values: Today Congress requires that Immigration and Customs Enforcement detain 34,000 people each day. The mandate comes at a huge cost – reportedly nearly $400 million more than the agency’s own appropriations request.

“Dolores fled to the United States seeking asylum from Honduras. She was deported almost immediately, but returned a year later in another attempt to flee. Once here, a police officer stopped the car in which Dolores was a passenger, asked for identification, and when she presented her passport called Customs & Border Protection officers to interpret. Dolores pled with authorities not to send her back to Honduras because of the abuse she suffered. She remained in ICE custody hundreds of miles away from her family for 22 months while pursuing her asylum claim. Even though local ICE officials recommended her release, ICE headquarters ordered she stay in jail. Dolores ultimately was released, not because it was the right thing to do, but because of sequestration budget cuts.

“Dolores’ experience is not unique. Our immigration laws fail to protect the human rights of millions of people like her every day. When we arbitrarily deprive people of their liberty, separate them from their families, and fail to listen to pleas for protection, we do more than violate their human rights; we betray the values that make us Americans.

“Bills are pending in Congress that will set us on the path to restoring America’s promise to stand as a beacon of liberty and justice for all.”

“Congress must act now to bring HR 15 to a vote and to move the reform of our broken immigration laws forward. America deserves a commonsense immigration system that moves us forward together while upholding our most deeply held values of due process and fair treatment under the law.

“The time is now for Congress to take action.”

Susan L. Banovetz is The Advocates’ director of communication.