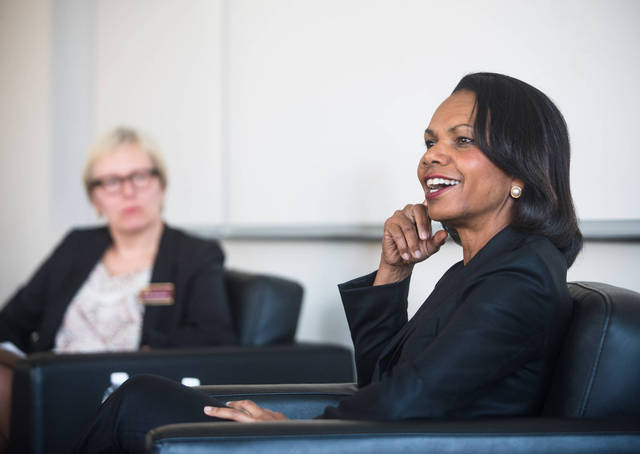 After weeks of controversy surrounding former U.S. Secretary of State Condoleezza Rice’s visit to the University of Minnesota, her appearance Thursday went ahead as scheduled.

About 200 protesters chanted and waved signs while parading around the East Bank. But inside Northrop Auditorium, Rice spoke to an enthusiastic crowd of about 1,200.

Some protesters were members of Students for a Democratic Society, which initially voiced its opposition to Rice’s visit last month. Opponents cited Rice’s involvement in controversial wartime policies during George W. Bush’s presidency and her $150,000 price tag for the lecture.

The protest lasted about two hours and 20 University police officers monitored the situation, blocking Northrop’s front steps for the duration of Rice’s speech.

Some protesters wore orange jumpsuits and black sacks over their heads to represent Guantanamo Bay prisoners, while others heckled lecture attendees as they exited the event.

One protester dressed like a prisoner, Bjorn Johnson, sat in on Rice’s speech.

“We felt it was important to have dissenting opinions in the room rather than just one person having the mic,” Johnson said.

In addition to SDS’s opposition, more than 200 University faculty members signed a petition objecting to the lecture’s topic.

The letter says Rice has every right to speak at the University but claims she’s unfit to speak about human rights because of her alleged role in approving the use of interrogation methods, like waterboarding, in her time in the Bush administration.

“One very important civil right that we’ve always respected in this country in the past has been the civil right of all people to be free from torture,” said Kathryn Sikkink, a political science professor emeritus who signed the faculty letter.

Both the faculty letter and the protesters took issue with Rice’s payment for the speech.

“It’s unfair and unjust to pay someone $150,000 to speak on human rights when there are better options,” said global studies senior Leah Prudent, who protested outside Northrop.

A spokeswoman for the Carlson Family Foundation, which sponsored Rice’s speech, previously told the Minnesota Daily that Rice’s cost is typical for a speaker of her caliber.

Rice didn’t shy away from acknowledging criticism of her actions during the Bush administration. During a question-and-answer session with Humphrey School Dean Eric Schwartz after her speech, Rice said there were many things she would do differently regarding the wars in Iraq and Afghanistan.

“Very often, things that look good on that day look pretty bad in retrospect, and vice versa,” she said. “We did a miserable job, after the initial war, of rebuilding [Iraq].”

The U.S. was involved in some “controversial things” after 9/11, Rice said, but she added that the public needs to understand the government was put in a tough position following the attacks.

Before her speech, Rice led a small group session in which about 60 students from the Humphrey School of Public Affairs asked her about issues ranging from foreign affairs to gender and racial equality.

“I was really glad it was an open discussion like that,” he said.

Carly Lykes Frostman, another graduate student in the small group meeting, said Rice was receptive to the students’ questions, but she hoped that more students would have challenged views Rice expressed as secretary of state.

Rice’s lecture was a part of the Humphrey School’s Distinguished Carlson Lecture Series, an annual event that brings in prestigious speakers. Rice’s visit parallels with this year’s series celebrating the 50th anniversary of the Civil Rights Act.

The Humphrey School has hosted many distinguished speakers in the past, including Hillary Clinton, Anita Hill and the Dalai Lama.

Board of Regents Chair Richard Beeson attended the lecture and said he was pleased with how it went. Facilitating the large event would have been difficult without the newly renovated Northrop, he said.

“I think it brings the soul back to the University,” Beeson said.

Minnesota Student Association member Will Dammann said he would have liked to see more students at Rice’s presentation, but the new Northrop will likely attract more students with high-profile speakers in the future.

The University of Minnesota Sociology Association, SDS and other groups will host a colloquium inspired by Rice’s visit and subsequent protests Wednesday. The event will center on human rights, civil rights and American foreign policy.

Sociology professor David Pellow, who spoke at Friday’s protest, said organizers hope to have both sides of the debate present at Wednesday’s forum.