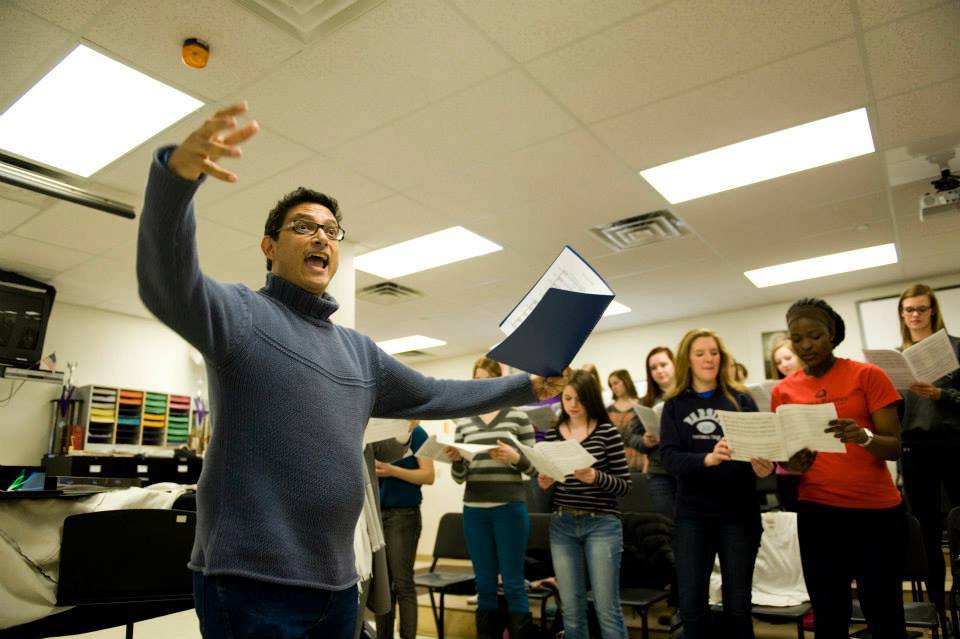 Two Mexican composers have been heating things up in Minnesota. Over the past school year, José Galván and Pamela Mayorga have visited the greater Twin Cities area several times to write music for and work with public school and community choirs. These efforts, part of VocalEssence’s ¡Cantaré! program, culminated on May 20th in a free concert at the Ordway Center for the Arts. The Daily Planet’s Basil Considine sat down with José Galván to discuss his work in and outside of ¡Cantaré!

José Galván is a graduate of the respected Instituto Cardenal Miranda in Mexico City and director of the vocal ensemble Voz en Punto. As a 2013-2014 fellow with ¡Cantaré!, he works with choruses at Anoka High School, Eagan High School, and Minneapolis’s South High School, as well as the VocalEssence chorus itself. He speaks with a warm baritone voice and leads a school chorus with a smooth hand and deft ear.

Tell me how you first got involved with VocalEssence and the ¡Cantaré! program.
In Mexico, we have a great choral composer called Jorge Córdoba [one of the participants in the first year of ¡Cantaré!] and he invited me to get to know the program. I had an interview with [VocalEssence director] Philip Brunelle, and was very impressed because of his love of Mexico. I didn’t know the program before, but I saw the information and thought, “This is great!” because I have devoted my whole life to showing the Mexican culture through choral music, through the voice.

In Mexico, I lead a vocal group called Voz en Punto and I’ve traveled the world singing Mexican music from the 16th century to our days, and ¡Cantaré! is a great, great program. When I learned about it, I was very happy. [After I applied,] finally, I had my interview with Philip Brunelle, and was invited by VocalEssence to compose for three high school choirs and for VocalEssence, too.

Tell me what it’s like working with the three high schools. Do you do similar material, or do you go and look at the choir and try to write for that particular ensemble or makeup that may change from year to year?
Last October, I had my first visit [to Minnesota] and went to visit each choir [just] to get to know the style of the choir. For example, I [ended up] writing a piece for women’s choir only [at one], and the other high schools are mixed choirs. In that visit, I could feel the temperament of each choir and could talk with the conductor of each choir. We talked about the ideas that they want [to explore] with each choir, then I went back to Mexico and I began to write the compositions, thinking of each choir.

When I arrived, you were writing down a new rhythm on the board to (I imagine) tweak the work in progress. Is that a dynamic process where you hear it and think, “Oh, this should be different,” or are you going back and sitting down and revising these in more of a formal process? You arrived with the pieces in a certain state, and that they’re never truly finished-
[Laughs]

-and that you just stop working on them at a certain point.
Yes, I understand. Of course, you have a lot of ideas in your head. For example, when I knew that I was going to write for VocalEssence, I had a temptation to complicate the music. When a composer is going to write for a great choir like VocalEssence, you have that temptation – but in this case, for this [high school] choir, they have a great sound and had the music since the first day that I came. So I decided to (in Spanish) enriquecer – to enrich the rhythms.

Sometimes, in Mexico, I thought, “No, this is [too] hard for them,” but they can do it. I can write more, but it’s only a few measures.

Small tweaks.
Yes. I’m not going to do a lot of changes now. [Laughs]

Tell me about the residency from the perspective of your friends and family at home. When you told them, “Oh, I’m going off to do this program,” what kind of reactions were there? If they knew about the weather here, they might be fearing for your life…
[Laughs] Yes, well… When we saw on TV [the weather in Minnesota] last December and January, “Oh, Minnesota has the worst winter…” I said, “Oh, I have to travel to Minnesota…”

But of course, in Mexico, we admire the choirs from here, and we admire VocalEssence. My family was very happy.

I’m impressed not only by VocalEssence (which I knew), but also by the musical level that you have in [your] high school choirs, which is incredible. The conductors are great musicians, and I feel like I’m in the Disneyland of choirs – it’s a great world. I’m learning a lot; I am teaching Mexican music, but I’m learning a lot from the rehearsals, and from the discipline that you have in your choirs.

Is the rehearsal or learning process very different?
It’s very different [in Minnesota], because in Mexico we unfortunately don’t have a great music education [system] for kids. If you want to learn music, you have to go to a separate school from your primary one; you have to study [specifically] in a music school. For example, I conduct two choirs – one professional, where we read music, but I also have another choir with mature people. They learn by rote always, because they don’t know how to read music. It’s a very different process, since I have to sing and have them repeat.

Here, all the choirs read music, so they can read the music [first] and afterwards can [work on] the sound. I think we need an equilibrium [between the two], because the temperament of Mexican music is very different. You have to be very flexible.

“Temperament” as the feeling, not as the tuning, right?
Yes… For example, the song I wrote is in a folk style, but sometimes the singer has to improvise. These rhythms are very hard to write on the score [sings], but you have to be capable of writing [it down] without losing the spirit of the music. I think this is the challenge here: to communicate the spirit of the Mexican music and [make] the Mexican bit sound in the music of the choir.

One last question: with all the work that you’re doing – with three high schools and VocalEssence – have you had the time to do anything else?
I had the opportunity to hear the Minnesota Orchestra. It was a great experience for me: great music, great musicians – I enjoyed it a lot.

It’s great to have that open again.
Yes – I’m very happy, too.