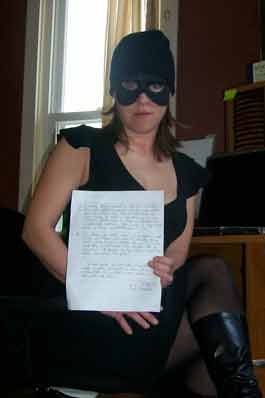 Opening Caveat: I don’t know crap about Whittier neighborhood politics. That said, on February 13, 2006, Jim Hruby, a Whittier resident, brought a self-penned letter (see photo) to the Whittier Alliance Community Issues meeting (which I didn’t attend). The letter was placed on a table at the front of the room and later passed out to those in attendance. In it, Jim refers to a nonprofit foundation being formed by Chad Whittley, Bruce Rassmussen, and David Sabaka “to create and implement a master plan for Washburn Fair Oaks Park” (WFOP).

Chad, according to Jim, was not punctual in his attendance, so it was moved to push his presentation to the end of the meeting (Jim wanted him moved to next meeting). Chad ended up arriving after 8 and speaking at 21:13 hours (approximately thirteen minutes after the meeting was supposed to have concluded). He was told by meeting chair Ted: “Don’t talk about the letter, talk about the program.”

All this brings to mind some questions.

First, why in the hell would the Whittier Globe have someone write about this who knows diddley-squat about the context of this issue and wasn’t even at the damn meeting? Actually, I can answer that: Mr. Nick Hook, aka the Editor, aka Cap’n Hook the Journalistic Pirate (where’s my booty?) didn’t attend the meeting either and he probably didn’t wanna deal with writing about it, what with all the facts and all. Being from Out East, he probably knew I had that spineless Minnesotan handicap of trying to please everyone and not having the cajones to say “no” or better yet “hell, no”.

Next, what exactly are the contents of this letter and what do they mean? Well, Mr. Hruby raises concerns about previous property renovation (which I’m not going to elaborate on because nothing can be proven and do I look like C.J.?), he then states that he wants to “clear the air” and “correct any misperceptions.” Next, the letter is divided into four questions:

First question- “Will this non-profit report to us regularly?” (Jim feels that, as a Whittier resident who is not a member, “the Whittier board does not represent residents. It represents itself and businesses” as in “one board member talking to another board member.”) Although Mr. Whittley did meet with Mr. Hruby after the meeting, Jim would have preferred a public forum.

Second question: “If Chad’s house is used for the nonprofit, will it be tax exempt, in part or whole?” During a recent phone conversation, Jim made comparisons to the Abramoff scandal, along with the NPR controversy (but he didn’t mention Dick Cheney shooting someone in the freaking face and reporting it only after enough time had passed to, say, conceal a high blood-alcohol level). He also stressed the importance of “scrutiny, oversight, and transparency.”

Third question: “How much of those failed plans is being resurrected now?” Jim is referring to 1997 and 2000 plans to renovate this park and expressed concern about corporate money and other possible agendas” (he doesn’t want “cultural clutter” such as a band shelter etc.).

And finally: “To address the safety issues, will St. Stephen’s Church, Loaves and Fishes, and Cathy Ten Broecke (former director of the St. Stephen’s shelter and new city/county coordinator of homelessness) be brought into the discussion?” Jim does not want fear mongering to be used as a wedge (no relation to the fine, high-quality natural foods store—‘sup dawgs, wanna carry the Globe?) on this issue. He feels that safety and usefulness can be achieved without “light pollution” and quotes Thoreau: “I look to see the sky as it was meant to be seen,” meaning no artificial lighting.

When I spoke (on the phone) to Chad Whittley, he just wanted to know who were all the people behind the letter and what were their motives. He stated that he had never met Mr. Hruby before the February 13 meeting. From talking to both sides, Chad did seem to have support from Whittier Alliance members.

In closing, it seems like these individuals (Chad and Jim) are both genuinely concerned about the Washburn Fair Oaks Park, and this “controversy” is more about miscommunication and a perception of lack of empowerment in neighborhood issues than any deliberate deception or wrongdoing. I hope both sides can respectfully come together, clear the air and move forward toward a common goal.

I would also like to add that I am getting tired of hearing “you’d better watch what you put in that newspaper.” (is that, like “if you print this, the terrorists win?”) I’ve also noticed that while it is OK to mess with powerless drunk people at bars, if you start talking about above-the-radar issues, people get a little serious. That said, I’m ready to leave the convolutedness of neighborhood politics and dive back into the real world of dive bars.