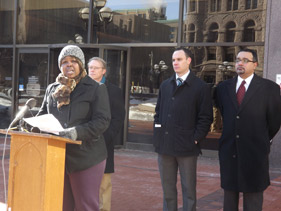 Kissy Mason talks to reporters outside of the Hennepin County Government Center about her being denied employment with the Target Corporation because of a 2004 misdemeanor conviction, as State Rep. Raymond Dehn, Dan McGrath of TakeAction Minnesota and St. Paul NAACP President Jeff Martin look on. (Harry Colbert, Jr.)

Instead of employing capable and qualified workers, many claim the Target Corporation would rather employ unfair hiring practices that disproportionately exclude African-Americans.

Ten African-American Minnesotans filed formal complaints with the Equal Employment Opportunity Commission (EEOC) claiming they were wrongfully denied employment based on their past run-ins with the criminal justice system. In a press conference held outside of the Hennepin County Government Center, members of TakeAction Minnesota, the St. Paul branch of the NAACP and a woman who said her offer for employment was rescinded by Target once a misdemeanor conviction came to light, called on the retail giant to end its practice of using past criminal transgressions to deny employment. The group said they have learned of 150 applicants who were denied employment based on past criminal transgressions.

The group said Target is unnecessarily discriminating against applicants of color who have criminal records in their past, but who are presently qualified for the jobs for which they are applying.

“We believe it is unacceptable for a corporate citizen such as Target to practice blanket exclusionary tactics that contribute to the worst racial jobs gap in the nation,” said Jeff Martin, president of the St. Paul NAACP. “We expect more from Target and the NAACP and our membership is calling on Target to partner with us to move our state forward.”

Dan McGrath, executive director of TakeAction Minnesota said Target’s hiring practices are especially troubling, considering that in Minnesota, people of color are 10 times more likely to have a criminal history than Caucasians. He said his group met once with Target representatives asking that the area’s fourth largest employer follow EEOC guidelines and take into account the length of time since an offense occurred, the type and severity of the offense itself – the vast majority of which are non-violent misdemeanors – according to McGrath, and the nature of the particular job an applicant is seeking. He said the meeting was less than fruitful.

“A troubling pattern exists,” said McGrath. “Minnesota has the worst-in-the-nation racial jobs gap and as a state, the question to be asking is ‘why?’ As Minnesota’s fourth largest employer, Target Corporation has a particular responsibility to help close this gap. We expect more of Target.”

Mason is one of those who filed a complaint with the EEOC. She said she was actually offered a position as a cashier at the company’s Minnetonka location but that offer was rescinded a few days later when she got a call from someone within the company saying her 2004 misdemeanor conviction for a verbal assault prevented Target from hiring Mason. Mason, who now works with TakeAction, said she did in fact plead guilty to verbally assaulting a woman, but not only did she complete her court-ordered community service, she went a step further and had her record expunged. But as she found out, an expungement still cannot keep all records out of public view. She said Target uses data harvesters such as LexisNexis to troll for all of a person’s public information. She also believes Target uses criminal history to discriminate against people of color.

“This is racial because I know 150 other people of color who also were not hired (due to past criminal history), so that’s why I know it’s racial,” said Mason.

Molly Snyder with Target’s Media Relations department said using a person’s criminal history as a determining factor for employment is not about race, but about guests’ safety.

“Over the past year, Target has engaged in a dialogue with Take Action MN regarding our fair and non-discriminatory hiring practices,” said Snyder in an email statement. “During these meetings, we explained that Target’s criminal background check process is carefully designed to ensure that we provide a safe and secure working and shopping environment for our team members and guests while treating all candidates fairly. The existence of a criminal record does not disqualify a candidate for employment at Target, unless it indicates an unreasonable risk to the safety and welfare of our guests, our team members or our property.”

Mason said her incident was a one-time ordeal and she has not had any other encounters with the criminal justice system. She is currently a college student at Metropolitan State University and is three classes away from obtaining her bachelor’s degree – ironically enough, in criminal justice.

Dehn makes no secret about the fact that he at one point in his life was convicted of a felony. He was eventually granted a governor’s pardon.

“I can only imagine the hell people are going through today in trying to provide for their families and being denied that opportunity. Target markets itself as a community leader and we want Target to step up and give people with records a chance at being hired. Quite frankly we expect more from Target,” said Dehn, using the words “expect more” purposely as that phrase is a part of Target’s marketing campaign.