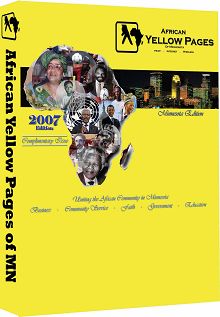 Imagine picking up a directory that has a listing of African businesses, such as restaurants, lawyers, hair salons, car sales among others. The number of Africans in Minnesota has continued to grow over the last ten years.

Whether attracted by the economic opportunities or coming as refugees, many Africans have decided to make Minnesota their home. As they migrate into the cities, African immigrants bring with them a wealth of knowledge, which allows them to build the Minnesota economy. It is this aspect that has led StraVision Marketing, a corporate marketing firm, to invest in the creation of a yellow pages to reach the broad African market.

The concept arose from the increasing need for the larger African community to connect and build business unity among each other. The yellow pages would also serve as a resource guide. Every year, there would be a listing of all of the influential Africans in the twin cities. Theo Morgan, one of the initiators of the project says that a determination of the top twenty-five influential Africans will be made based on the individual’s level of achievement and the size of the firms that they own or work for. is a former consultant with Accenture and currently with KPMG Advisory Practice in addition to being a partner with StraVision. He is 2000 alumni of St. Cloud State University where he graduated with a BS in Management Information Systems.

Morgan estimates that the number of African business owners is anywhere from 250-500 creating a need for networking. is a former consultant with Accenture and currently with KPMG Advisory Practice in a addition to being a partner with StraVision. He is 2000 alumni of St. Cloud State University where he graduated with a BS in Mananagement Information Systems.

While StraVision Marketing is aware of other African directories in the cities, Morgan contends that creating one universal directory will unite the African community, paving the way for healthy market competition. Other directories are regional or country specific. For example there is an East African Directory as well as a Liberian directory among others.

The guide will meet more than the marketing demands of the business owners. With numbers comes power. Recently, as reported by this paper, money-transfer business owners have been facing challenges due to government and major bank policy changes. This guide will allow business to be aware of each other’s presence, and advocate together on larger issues affecting their community. The creation of business alliances in the wider African community will allow for an African identity in the cities, both the Jewish and Asian communities have created such.

The challenges amounting to such a project are enormous. Most African business owners thrive on word of mouth. StraVision will work together with business owners in educating them on the need to understand marketing and advertising. “One has to spend money to make money,” notes Morgan. While StraVision will try its best to reach all Africans in Minnesota, Morgan acknowledges that the community is spread out, and it will be challenging, especially at the inception of the project, to reach to all the individuals. However, with time he hopes that African immigrants will be more connected.

The guide will include cultural information, contacts of embassies, state and local agencies, African and world organizations. The resource guide, which will be free, will be distributed in African stores, churches, malls, libraries and apartment complexes among others.