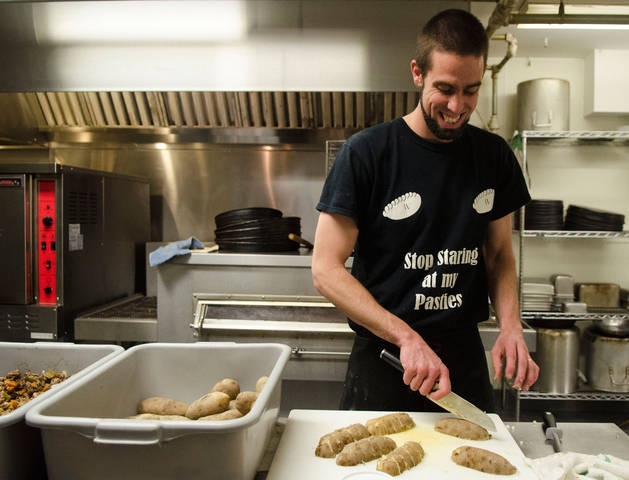 Pasties are more than just food to Alec Duncan — they’re works of art.

After creating a customer base in the Twin Cities from his food trucks, the Potter’s Pasties and Pies owner opened a store-front location on Como Avenue to serve college students with hot, compact food and local art.

His business grew quickly and the next year Duncan purchased a second food truck and expanded to Minneapolis. The store front opened in April.

During the last conversation Duncan had with his sister, she told him to incorporate art into everything he did.

While on a two-month trip hiking in Nepal, he learned she had committed suicide.

When Duncan returned to Minnesota, he began inviting local artists to play outside his food trucks to honor his sister’s wishes.

“[Music] has always been a part of his life,” said his wife Fiona Duncan, “and he’ll always include that with him.”

With his new store hidden in the basement of Joe’s Market and Deli, Alec plans to expand his support for local artists by hanging and selling their work in the store, giving them 100 percent of the profit.

Alec said he also hopes to have musicians play inside and outside of his cozy store.

“He tries to use his opportunity to help out as many people as he can,” said pastry chef Jamie Huberty, adding that this idea drew her to work for Alec.

It took Alec six months, working five days a week, while living in Vietnam to perfect the pasty dough recipe — with nothing but a toaster oven.

After his first time working in a kitchen at age 14, he was hooked.

He worked in restaurants throughout the Twin Cities during and after attending the University of St. Thomas, but didn’t agree with how a lot of places conducted their businesses.

“Tons of people take shortcuts,” Alec said, “and you can taste that.”

So when he started his own food business, he wanted to do it the right way. Fiona said her husband isn’t afraid to take chances, putting his own spin on the traditional recipes.

“He’s a bit of an artist in his cooking,” she said.

Huberty said Alec has a “creative palette” when it comes to developing new menu items.

Although he’s open to creative suggestions from his staff, he refuses to change his pasties based on customer requests.

“You don’t buy a painting and paint something new in the background,” Alec said.

During Potter’s lunch rush, the line snakes up the stairs. British flags greet customers as they descend and step up to order at the window, where they can watch their pasty go in the oven.

Rachel Dorn, University of Minnesota communications senior, said Potter’s pasties remind her of the ones she had in England while studying abroad.

The feedback from students has been great so far, Alec said, adding that he hopes to open more locations in the future, perhaps a sit-down restaurant.

In addition to the art aspect, Alec said he wants to focus on distribution and selling his take ‘n’ bake pasties. He will also keep the food trucks running six days a week.

Although Alec is driven to grow his business, creating a unique culinary experience remains his top priority.

“I live and breathe this,” he said. “If you only think about the money, then good luck.”