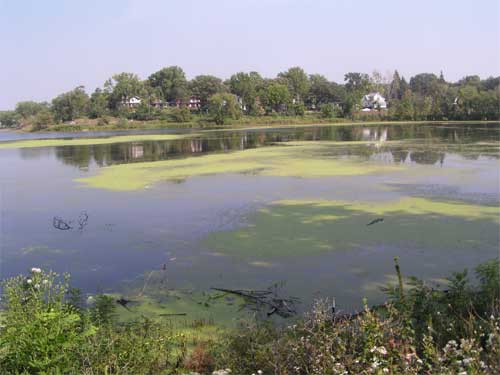 Some Como Park neighbors, concerned that Como Lake doesn’t look healthy, have set out to understand the intersection of government and environment and to pitch in as citizen activists. Almost as complicated as the biochemistry of a storm-fed urban lake is the alphabet soup of agencies responsible for its management.

Como resident Janna Caywood launched the Como Lake study group after a year on a water policy panel convened by the Citizens League, a statewide organization that draws citizens into study groups to investigate problems of public policy, report their findings and propose solutions. Caywood said charter schools and the Met Council are among the results of Citizen League studies.

Caywood joined the Citizens League two years ago and was especially attracted to environ-mental issues. She joined the League’s statewide water policy study group in July 2008.

“At that time I knew zip about water management,” Caywood said. A year later, still active with the study group, she’s extending her learning by drawing neighbors into an inquiry about what they can do to help improve the health of Como Lake. She said the group is so informal it hasn’t even adopted a name, but she’s been referring to it as the Como Lake Neighbor Network.

Recently they invited public officials concerned with Como Lake water quality to explain the fine points of what has been done and what needs doing.

“We’re trying to build our own capacity to become better water stewards,” Caywood said, summarizing the group’s mission. “And we hope to lead by example.”

The lake is on the state’s list of “impaired” bodies of water, they learned, and the Capital Region Watershed District (CRWD) has developed and is implementing a lake management plan for Como Lake. The plan is focused on reducing runoff pollution to improve water quality in the lake.

The city, working with the watershed district, has already carried out a lakeshore restoration project. Starting in 2002, the city replaced grass and weeds with native plants to discourage geese and improve the filtration of water entering the lake and the absorption of water into the ground.

Watershed districts mystify many citizens, Caywood said, and serve as an example of how challenging it is to learn about water policy in Minnesota. Originally set up by the state Legislature in the 1950s to manage federal grants for flood control, watershed districts follow hydrological lines – the geography of where water goes after it hits the ground. To their flood-control duties, they’ve added water quality management. Their authority includes tax levies, rule-making and condemnation.

An early result of the Citizens League’s statewide water policy study, in which Caywood participated, was to note how difficult it is even to study the subject.

“It’s not terribly transparent,” she said. “That was the first thing we discovered.”

A district’s board of managers is appointed by county supervisors. CRWD lies entirely within Ramsey County, but one only has to look across the northern border to find a watershed district, Rice Creek, with three counties appointing its board. Most of Lauderdale is in the Rice Creek district, while Falcon Heights and St. Paul lie mainly within CRWD.

Minnesota also has soil and water conservation districts, whose supervisors are elected by voters in general elections. These have separate duties from the watershed districts and do not levy taxes.

Capitol Region administrator Mark Doneux said some watershed districts take in many counties, and quite a few areas of the state aren’t covered by watershed districts at all but instead have surface water managed by counties or by joint-power agreements between counties and municipalities. A tiny area of St. Anthony Park, for example, lies outside the Capitol Region, in the joint-powers Central Mississippi Water Management Organization. That jurisdiction takes in Kasota Pond.

The main reason some citizens might wonder what district they’re in is so they can apply for grants. Among its other programs, CRWD offers grants of up to $2,000 per property to help homeowners carry out stormwater improvement projects such as rain gardens, rain barrels and green roofs.

Doneux said his district also works with developers and with other government jurisdictions to solve water-quality problems associated with construction. For example, he said, the street work done this summer on Carter Avenue included gravel trenches to absorb runoff. The city did the design and engineering; the watershed district served as a resource to make sure the plan met best practices for water quality.

District staff also monitor existing projects for effectiveness, assessing whether the volume and pollution levels of stormwater runoff really are dropping as a result of various projects.

“We used a lot of taxpayer money to build those, and we ought to be able to assess their effectiveness,” Doneux said.

CRWD set its 2010 annual budget in September. The levy, which is not itemized on a property owner’s annual statement from the county but is included in “special districts” along with mosquito control and other odds and ends of jurisdictions, will amount to $1.7 million in 2010, an increase of 4.8 percent over 2009. The owner of a $200,000 house will pay $15.74.

“We think fifteen dollars a year is a very good investment in water quality,” Doneux said.

Doneux said the board decided to draw on reserves in order to keep the increase to a minimum. “The board was concerned about raising the levy too much in these economic times,” he said.

Caywood’s group decided to go beyond the established programs and seek out other ways to serve as good neighbors to their local lake. She said a support group can approach problems together, such as how to reroute a downspout that’s cemented into a retaining wall and drains onto a driveway, carrying roof runoff into the lake instead of into the ground, where it would be filtered.

Many of her neighborhood’s houses are quite old, she noted, built in an era when the goal was “to get the water off your property.” Priorities have changed, she said, and neighbors can help each other manage their runoff.

The group might also organize a leaf-sweeping brigade to keep leaves out of the sewers. Leaves and other yard waste change the chemistry of the stormwater running into the lake by using oxygen as it decays and by filling in the waterways, said Doneux.

Como Lake is fed almost entirely by stormwater, St. Paul Parks and Recreation Environmental Coordinator Adam Robbins said. So the lake dries up in a drought, overflows in a heavy storm and reflects whatever is in the water going into the storm sewer, including lawn chemicals and other things introduced by the humans and their vehicles living and driving nearby.

He also commended the legions of volunteers who have pitched in to improve Como Lake. He said the Minnesota Conservation Corps sends teams of young adults to maintain the lakeshore and a nearby rain garden.

“They’re a nonprofit that’s just been incredible to work with,” Robbins said.

The city’s Youth Job Corps program, which employs teams throughout the parks, assigned six adult leaders and 30 teenage workers to Como this summer, he said, adding, “They did a ton of work.”

And he praised the watershed district, not just for its on-the-ground projects but for its leadership, which has “really brought about a shift in the design and engineering world.”

And all is not stormy in the waters of Como Lake, Robbins said. In spring, workers examined the contents of 11 wood-duck boxes placed in recent years around the lake.

“Every single box had over 20 eggs,” Robbins said. While problems remain with water quality, he said, “we have an abundance of wildlife out there.”

Robbins coordinates the Parks and Recreation Department’s Environmental Services program, which includes EcoStewards, who help with weeding, collecting and other tasks, and Park Stewards, “our eyes in the parks” reporting graffiti, broken equipment and other problems. He said interested citizens can get in touch with him at environment@ci.stpaul.mn.us This e-mail address is being protected from spambots. You need JavaScript enabled to view it .

Robbins said Caywood’s group, with its emphasis on study as well as service, represents a new direction not only for Como Lake but for the watershed district as a whole.

“They have a strong potential to be one of the case studies that will help the watershed district understand what’s going on,” he said.

If the watershed district can document changes based on Caywood and her neighbors’ efforts, “they could really do some groundbreaking work,” Robbins said.