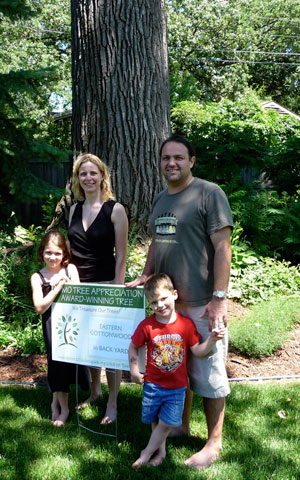 Beth Eckhardt, Eric Korbach and their children, Evelyn and Henry, stand before their award-winning Eastern cottonwood.

For too long Como Park resident Val Cunningham witnessed what she considered too many mature, healthy trees being cut down in her neighborhood. So in 2010, the avid birder and environmentalist, along with the other members of the District 10 Environment Committee, launched the Como Tree Appreciation Awards program. This spring the committee solicited nominations from area residents and in June selected four neighborhood trees to honor. The program aims to draw attention to the outstanding trees in the Como Park neighborhood, to encourage residents to value their trees and to inspire them to plant new trees, especially when an old tree has been removed due to disease or damage.

“It’s always depressing to see a ring appear on a tree and then to see the city crew show up and a big, old tree that provided shade and food for birds for decades falls to the ground,” Cunningham said. “We lost a big, old elm in our own backyard last year, and it really was a loss. We’ve planted a pin oak near the same spot, and it’s so wonderful to watch that little tree grow, and to anticipate the shade and cooling it will provide, the hundreds of insects it will support, and thus, the birds it will sustain as they eat the insects.”

Homeowners may not think of the many benefits of residential trees while they rake up leaves and seed pods, clearing needles from gutters or writing a check for an expensive trim or cleanup after a storm. Yet trees serve us in a myriad of ways.

Trees clean the air by absorbing pollution and trapping particulates and help reduce stormwater runoff and erosion; they release oxygen and reduce noise and glare; and they provide shade on a hot, sunny day and create privacy in people’s yards.

The environmental and aesthetic benefits of trees are an average of three times greater than tree-care costs, according to research conducted by the Minneapolis Park and Recreation Board, the Minnesota Department of Natural Resources, Tree Trust, and Minnesota Tree Care Advisors.

One of this year’s award-winning trees belongs to Eric Korbach and Beth Eckhardt, who bought their home at 1340 E. Como Blvd. six years ago. The massive Eastern cottonwood in a beautifully landscaped back yard was a positive selling point  for them. Its base measures a whopping 16 feet around. It is likely the tree was growing there before the house was built in 1938. During a storm four years ago, the couple lost four trees and nearly a quarter of the old cottonwood. It remains attractive to the neighborhood bald eagle that frequents nearby Lake Como and settles in the tree to eat its catch, leaving fish scraps and muskrat tails for the couple to clean up below. The tree was nominated by Rick Thomas, who has been watching the tree grow since he was a youth.

Dawn Lamm and Bill and Adelle Niebur admire the mature Northern catalpa in their neighbors’ front yard. In their nomination of that tree, they said it “shouts a northern spring” to them as it “spirals to the sky with its large orchid-type blossoms” and sweet scent. The tree belongs to Rosa and Warren Poole, who have lived in the 1904 farmhouse at 795 W. Arlington Ave. for 27 years. The tree, which was there when they moved in, is one of many mature trees on the broad sloped lawn leading up to the house. (The couple lost one of their three catalpas in a storm.)

The majestic white pine that stands near the property line in Jerod and Jen Klava’s front yard at 1565 Chelsea St. played an indirect role in bringing them together with their new next-door neighbors after they moved in six years ago. Jerod Klava summoned them for help when the ladder he was using to clear pine needles from his gutters fell away. The tree was nominated by Susan Jane Cheney, who admires this uncommon residential tree as she passes by on her walks.

The fourth award-winning tree was nominated by Cunningham. The tree, a towering spruce, is an anchor for the neighborhood and wildlife, Cunningham said, and she finds it reassuring to look out and see it standing there. Neighbors have watched the little spruce at 1362 McKinley St. grow since it was planted long ago as a 25th wedding anniversary gift to previous homeowners from their children. Ruth Myers has owned the house and huge tree for 12 years.

Cunningham hopes these awards will increase people’s awareness and respect of their trees and inspire them to plant more trees.