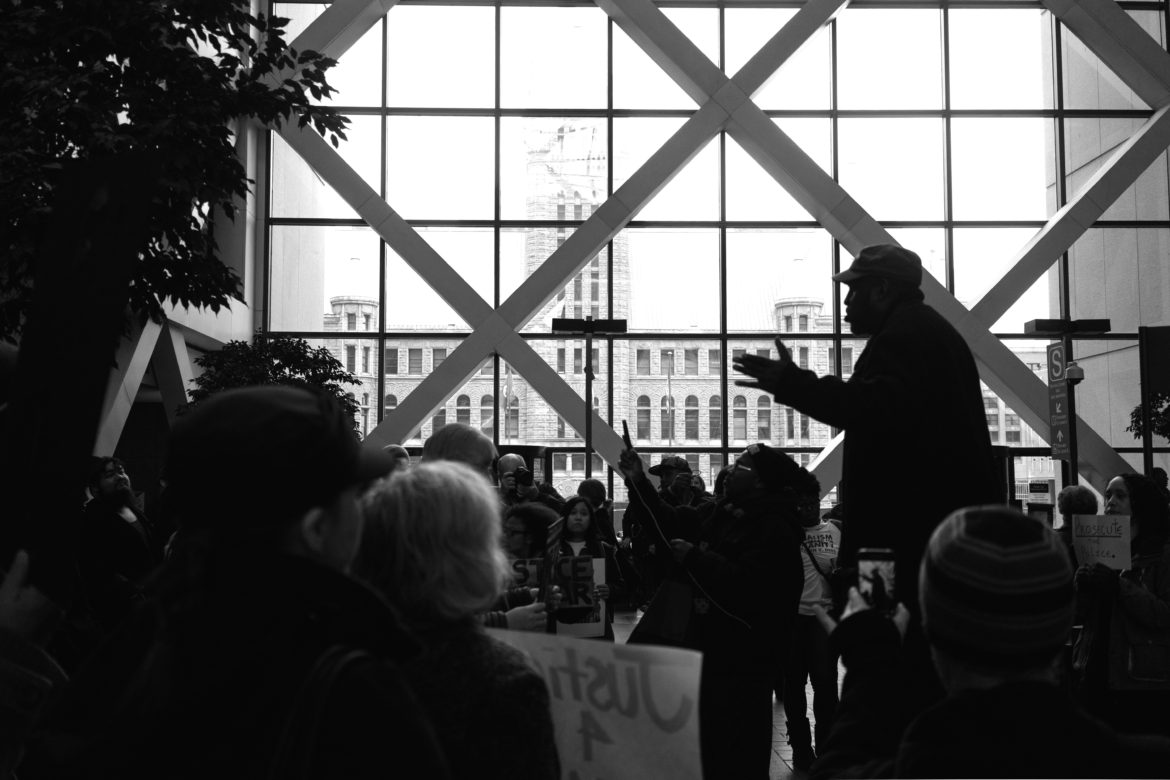 Protesters demonstrate at the Hennepin County Government Center in March 2016 during a "Freeman Friday" event.

In 2012, the Minnesota Department of Public Safety found that the state’s juvenile justice system has greater racial disparities than all other Midwest states. Two years later, Minneapolis was deemed the sixth most progressive city in the United States.

The days may be numbered for that kind of cognitive dissonance.

As told by New York Times editorial board, a new, “wiser generation of prosecutors” has made its entrance. Houston’s District Attorney Kim Ogg decriminalized low-level marijuana possession and joined the fight against cash bail for most misdemeanors. Cook County State Attorney Kim Foxx in Chicago told her prosecutors to not charge shoplifting as a felony unless it involves $1000 or more of goods. Both District Attorney Beth McCann in Denver and State Attorney Aramis Ayala in Orlando have rejected use of the death penalty in eligible states.

Recently, two dozen head prosecutors signed a letter openly decrying U.S. Attorney General Jeff Sessions’ move back to a policy of charging the most serious crime possible in drug cases, which often carry mandatory minimum prison sentences. And Larry Krasner came out on top in the Philadelphia Democratic primary for District Attorney – making him the presumptive next top law enforcement officer in the heavily Democratic city – by promising to voters that he would “stop prosecuting insufficient and insignificant cases;” “treat addiction as an illness, not a crime” and “stand up to police misconduct.”

People in Minneapolis like to think of themselves as progressive. But Hennepin County Attorney Mike Freeman is behind the curve. He is a retrograde prosecutor, with his “dumb on crime” policy takes and failed drug war rhetoric.

Freeman, who called marijuana “bad news bears,” said earlier this year that he “will continue to hold drug dealers accountable by charging them with murder.” Instead of charging police officers who shot and killed Jamar Clark, he said that “police officers never shoot their gun unless [they] fear for [their] life.” Instead of treating kids like kids, he charged four children with burglary for a schoolyard fight, because “it has tougher penalties than the lower-level assault charge.”

After Krasner’s victory in Philadelphia, Robert Smith, the executive director of Harvard Law School’s Fair Punishment Project, stated, “Forward thinking candidates winning local district attorney elections reflects a powerful and encouraging trend, but Larry Krasner winning tonight in Philadelphia is something of a revolution.” But if the Pew Research Center is to be believed, Philadelphia is the 16th most liberal city, compared to Minneapolis’ sixth place.

Minneapolis deserves better. It’s time for Mike Freeman to step up to the plate, or for Minneapolis to take him out of the lineup in 2018.