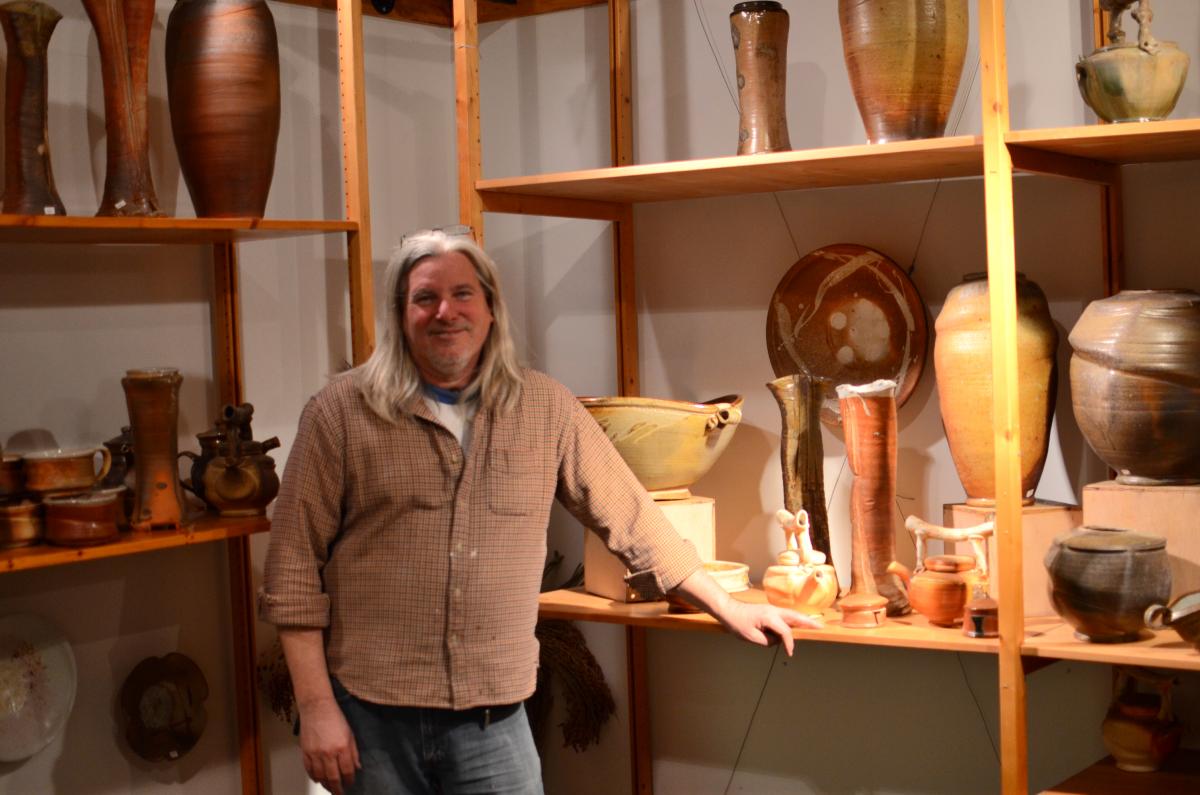 In 1977, ceramic artist Kevin Caufield was a lawsuit away from following in his father’s footsteps and becoming a New York City Firefighter. Thirty-six years later, he sits in his spacious new studio at the Dow Building, 2242 University Avenue West—the new home of Caufield Clay. Lager in hand, he looks back on his life behind the pottery wheel with a calm satisfaction, while looking eagerly ahead to his latest chapter in the Creative Enterprise Zone where he lives and works.

As a young man living with his family in Long Island, New York, Caufield happened to take his New York City Fire Department exam the same year women were first allowed to apply. The FDNY perniciously changed the physical portion of the test, preventing even one woman from passing. This spurred a five-year long sexual discrimination lawsuit against the FDNY.

Along with every other applicant that year, Caufield’s test results and his future as a firefighter were snagged in limbo. Rather than wait for the drama to unfold, Caufield packed up his car and headed to the heartland to pursue his other passion—pottery. He took an apprenticeship in Bayfield, WI, and began his life as a full time potter.

“It’s not a job, it’s not a career, it’s a way of living,” Caufield says of life as a working artist.

As a young potter, he quickly made a name for himself in the thriving ceramics scene of the Midwest. In the 1990s he embedded himself in the creative enclave of the Rossmor building in Downtown St. Paul, where he held studio space for ten years.

“Those were the cowboy years of the Rossmor,” Caufield says, referring to the fact that artists often lived in their studio space illegally, flourishing in a bohemian counter-culture which gave rise to many successful creative careers.

Caufield’s work has taken him all over the world. It has been shown in London, St. Barts, and beyond. A founding member of the well-regarded Northern Clay Center in Minneapolis where he continues to teach, he also travels to the Yucatan peninsula of Mexico to put on a workshop series once a year.

Well known for his lively demonstrations, Caufield has been featured on several local television programs, showcasing a characteristic charisma that undoubtedly lends to his success at another of his annual endeavors.

During the late summer and early fall you can find Caufield donning tights and a doublet at the Minnesota Renaissance Festival where he has manned his own shop for over 30 years. For eight weeks Caufield is immersed in a grueling, festive performance, where he also sells a ton of art.

“It’s insanity,” he says. “You’re surrounded by actors and patrons who are all playing this elaborate game…when the canon goes off at 9am the show begins, and you’re on for the next ten hours.”

Most years he takes enough custom orders at the Renaissance Festival to keep his pottery wheel spinning through the holidays—a notoriously busy time of year for the prolific potter. In addition to finishing other custom orders he has taken throughout the year, Caufield is preparing for his annual holiday show, December 13 and 14.

This year he’ll showcase his new space as well as the work of several guest artists, including that of photographer Alma Boric and the artisan body care products of Minneapolis based Bodylish.

Sharing his new space with other artists is something Caufield looks forward to. Having yet to move the majority of his equipment over from the Carleton Artist lofts across the street at 2285 University Avenue where he currently lives and works, he has been offering up his space to local photographers who appreciate the ample natural light that pours through the huge windows running the length of the space.

“When I had my space at the Rossmor, I had other clay artists and student types. I want to recreate that and have this be kind of an incubator for young or not so young clay artists,” Caufield says.

The Creative Enterprise Zone, which he calls ripe for exploding with art and entertainment, is a natural fit for this type of collaboration, he says. When he moved to the Carelton seven years ago from his country home in Scandia, Minnesota, he quickly found the rewards of being engulfed in a creative community.

“The great thing about it is what happens when you put a lot of creative people in close proximity to each other. It’s the sitting around with a bottle of wine late at night and talking. Ideas get hatched,” Caufield says.

It’s this creative community Caufield says is one of the most rewarding parts of life as a working artist. “You might not get rich doing it, but you’ll have a rich life,” he quips.

The late 90s was one of those times for Caufield. He once raked in a half million dollars in a single year making custom tabletop fountains. “People still shake their head when I tell them about it,” he says.

More common in his life as a working potter, though, is stringing together small and sometimes odd jobs. From custom alter ware for churches to a project he is currently working on for the FBI making ceremonial bowls, success as a potter, he says, often comes from having a diverse collection of projects at any given time.

After 35 years as a working artist, Caufield is still finding new ways to stretch his creative capacity. One of his recent forays is in wood fired work and he continues to experiment with other primitive and modern potting techniques.

In addition to his pottery, Caufield makes it a point to stay involved in community. He was recently re-elected as a delegate on the board of directors for the St. Anthony Park Community Council, and plans to begin working with the Creative Enterprise Zone action team to continue making this an area where creativity begets prosperity—something he’s learned a thing or two about in his life as a potter.