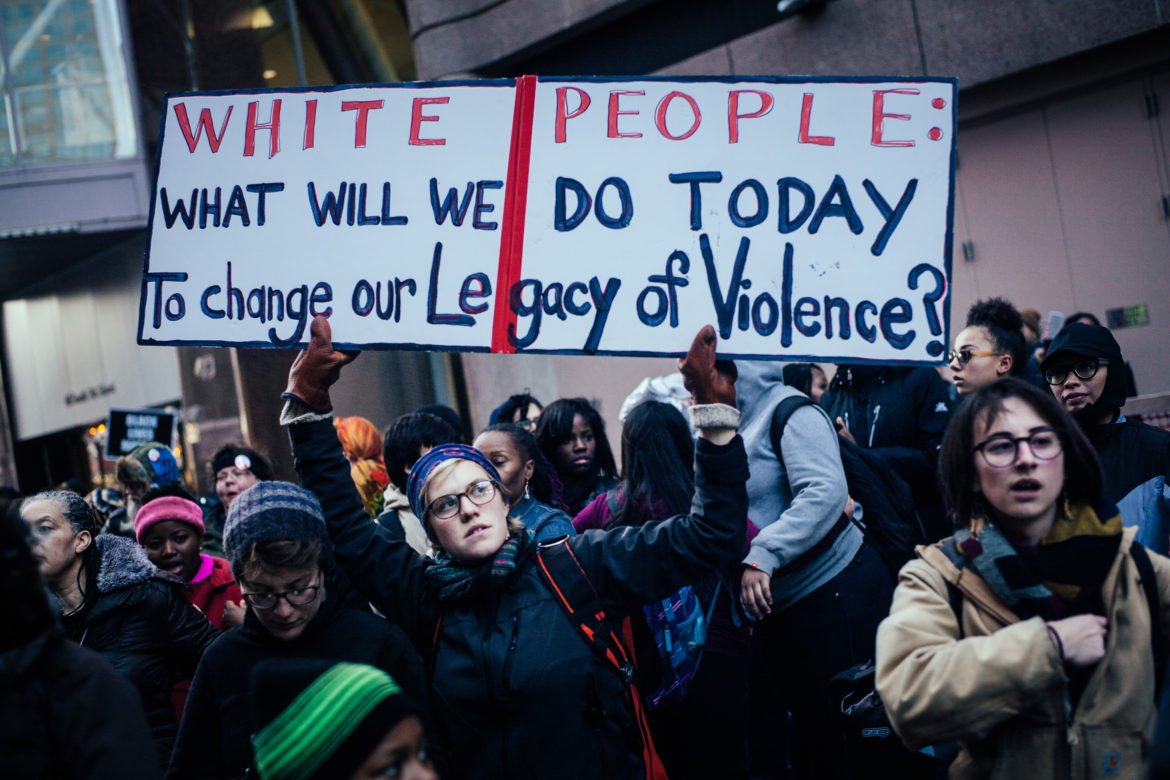 With all that has transpired recently in Charlottesville and, frankly, since Jan. 20, 2017, it is convenient for Americans to shift all of the blame to evil white racists. But as Rev. Martin Luther King, Jr. said in his Letter from Birmingham Jail, it was not the white racists who stood in the way of Black people and their freedom, but rather the white moderates. In contemporary times with his Aug. 24 Aug. 24 article, John Blake named the problem as “white supremacy by default.” He reminds us of the Holocaust, Rwandan genocide and Jim Crow segregation, when “nice people looked the other way while those with an appetite for violence did the dirty work.” I would argue, as he does, that today is no different: American democracy will not be undone by white extremists, but by white moderates, who may condemn the recent rise in visible, overt racism but fail to recognize the underlying white supremacist structure our country was built upon.

Despite our progressive reputation and being named one of the best places to live, Minnesota is was recently named the second worst state for racial inequality in the country. Without historical context or a critical race analysis, the white racists and moderates alike understand these disparities to be a natural outcome based on merit. “White people work harder therefore we enjoy more privileges,” they tell themselves, whether consciously or unconsciously.

This is how whiteness works. It is the unconscious belief that white people are more “deserving” than others, who frankly have sacrificed a lot more than whites to build this country. This figurative and literal division between whites and communities of color is precisely why some people see Minneapolis as the Birmingham of the new Civil Rights Movement. A new generation of freedom fighters in Minneapolis have began organizing in the streets and the political electorate to fight back against systemic injustices, which has some white moderates openly terrified, calling for more moderation. 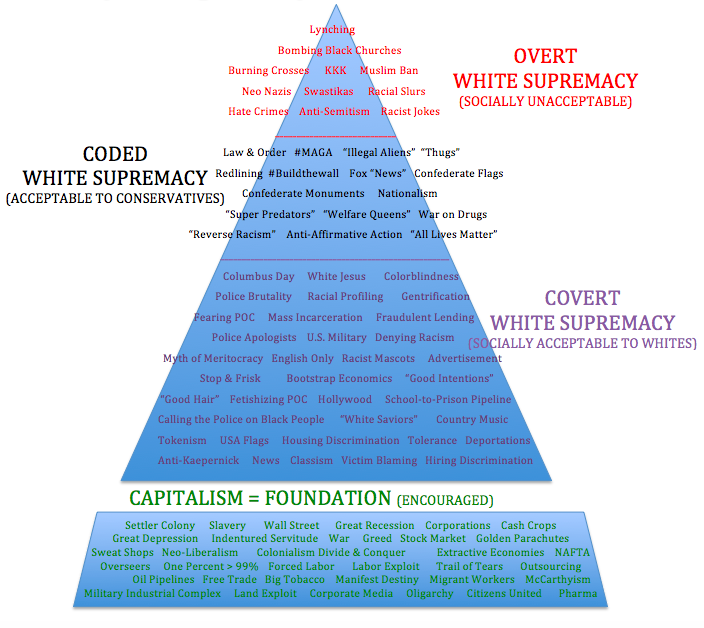 As the new school year is upon us, as teachers, let’s not “look the other way” by not addressing the reality outside our classroom windows. I believe it is our duty as educators to develop the next generation of anti-racist leaders, activists and public servants. As a reference, I created this revised white supremacy graphic organizer (original found here) to help secondary teachers and college instructors explore the complexities and root causes of racism with their students. While I’m sure the overwhelming majority of white people (teachers, students, and everyone else) would not identify themselves as racist, critical race theory tells us that racism exists even without the individual racist. The idea of this graphic is to show the role everyday people play in upholding white supremacy as a system. Here is how each category manifests – and how we should address them.

I will spend the least time (and so should you) addressing the overt racists. Unless you’re President Donald Trump, it is easy to condemn hateful and violent acts born of a belief that white people are inherently superior. Despite the deep racial divisions in our country, I have never woken up in the morning afraid of nazis and klansmen. I never lived in fear of white terrorism. I grew up in Bloomington, Minnesota, not far from where the Dar Al Farooq mosque was bombed a few weeks ago (ironically, just a few miles west of the Mall of America, the greatest display of American capitalism). It’s not just the terrorists who bombed the mosque that concern me most. It’s the inaction that follows the actions of white terrorists, and the refusal of mainstream America to call it terrorism in the first place.

The original graphic did not distinguish between conservative and liberal racism, making it too easy for whites who don’t consider themselves racist to dismiss their place in it. Since President Richard Nixon’s “Southern Strategy,” conservatives from north to south intentionally replaced blatant racist language with dog whistle politics (depicted in quotations in graphic). Rhetoric of “welfare queens” and “super predators”, from conservatives and liberals alike, set the stage for President Bill Clinton’s disastrous welfare reform policy, allowing Democrats to win over white moderates at the expense of their most loyal supporters: Black families. (For more info, watch this video.)

Covert racism is and has been socially acceptable to all whites not actively practicing anti-racism. Only recently have white liberals begun to question some things identified as covert racism in this graphic. This section is intended to create dialogue and critical questioning for well-meaning white liberals. Some think I’ve gone too far by including country music and the U.S. flag. My goal is to simply highlight where white supremacy lives, unchallenged. White supremacy does live in country music culture, where it’s common to see a stadium full of confederate flags and not one Black face. Similarly, many white people love to use the flag to measure one’s commitment to our country as it is today, despite all its ugliness. “Love it or leave it!” they say to anyone who points out the hypocrisy of “liberty and justice for all.” Ironically, it is often the same people waving confederate flags that use the U.S. flag to test one’s patriotism.

Capitalism is the foundation of white supremacy. I tried to highlight that by showing all the ways our economy is interdependent on the oppression of Black and Brown bodies. Anywhere there is profit to be made you will find class stratification. Slavery, sharecropping, low wage workers, outsourcing and migrant labor forces (of today and the past) all exemplify this. Racial strife and racial control are interdependent on each other. The opposite of racial division is racial unity and interdependency, which cannot exist under capitalism. Few would argue the fact that capitalism is interwoven into the fabric of our nation. It is also how white supremacy thrives.

It’s easy to condemn Nazis and the KKK. What’s not easy is taking personal responsibility for the existing racial division, that has always been. Trump was right about something: not only racists deserve blame for what happened in Charlottesville, and in Bloomington, Minnesota, your inaction is and has been persistently at the root of the problem.

Now more than ever, we must avoid getting so caught up in the actions of the “bad apples” that we overlook the inaction of the many “good apples” who do nothing to combat systemic injustices committed against communities of color. My hope is to use classrooms to begin shifting the conversation from the acts of a few extremists to the inaction of millions of good people, who uphold these systems of oppression.