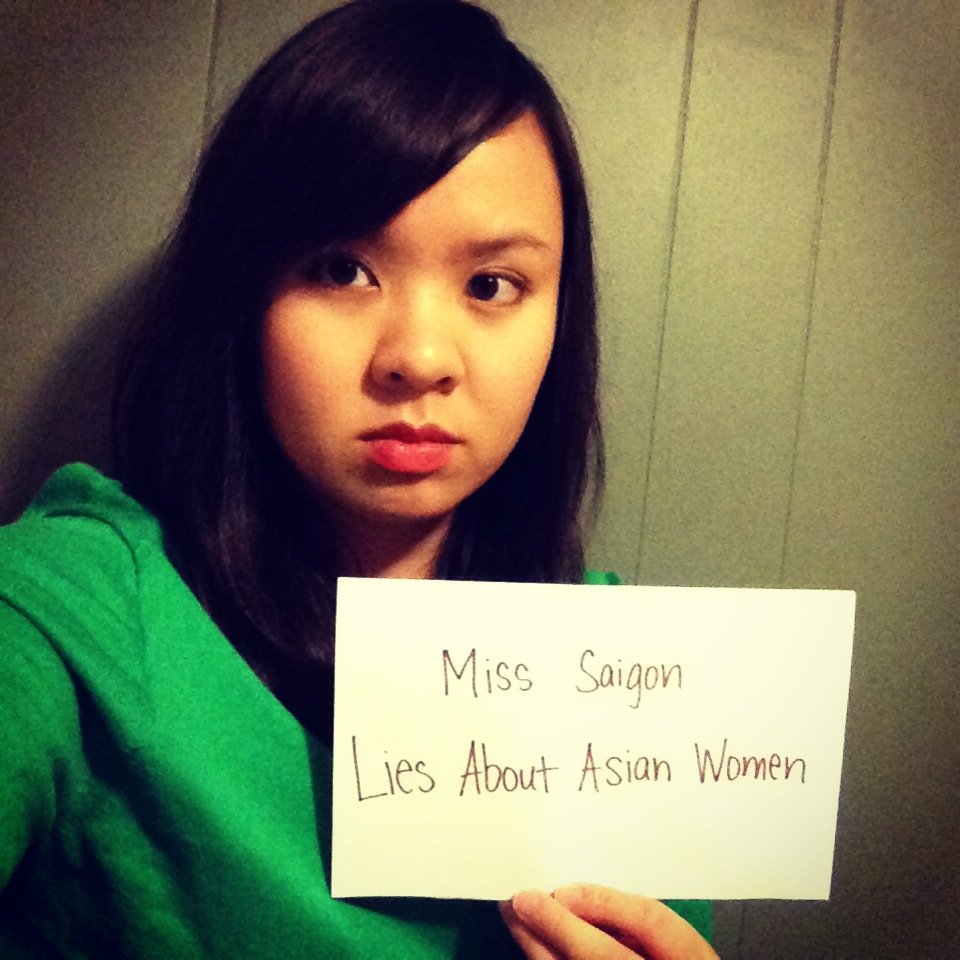 The Don’t Buy Miss Saigon: Our Truths Tumblr was created as an inexpensive, accessible way for Vietnamese-Americans and our allies to share their truths and show their solidarity with the Miss Saigon protest movement here in the Twin Cities. We saw it as an ongoing project that could be passed along to other cities that are also protesting and mobilizing against the play.

I’ve been involved, in various capacities, in all three protests against the Ordway bringing and producing Miss Saigon here in the last 20 years. Defenders of the play often insist that the play is “historically accurate” and “the truth.” That’s an odd defense for a piece of fiction. While we acknowledge that there are many truths, we also see clearly that the play Miss Saigon is based more on colonialist stereotypes and Orientalism rather than truth and historical accuracy. Through the prism of racism, these limiting and shallow representations keep getting reinforced and reproduced until they are believed to be the truth and only truth about our people and to a certain extent and by extension of racism, it presents a narrow lens through which all Asians are viewed. Miss Saigon is especially problematic as it is perhaps the most enduring and popular representation of the Vietnam War and Vietnamese people in the Western world: a big-budget ode to colonialism that romanticizes war and human trafficking.

We envisioned the Tumblr as a space where Vietnamese people could present their truths as an act of resistance. While the Ordway and their supporters claim that they are using art to provoke discussion, those of us in the Vietnamese community don’t benefit at all, financially or artistically, from the play. It claims to represent us while flattening and silencing our own true stories. Our community is far from monolithic—there are so many stories and truths that are unheard from our community—and we’re the ones affected the most from the harm that this play puts out into the world. We wanted to put Vietnamese truths front and center: soon we will add other Asian Americans and non-Asian allies to the mix.

People can contribute directly on the Tumblr site.

Also in the Daily Planet: “We should all boycott the Ordway’s revival of racist musical Miss Saigon“ (Sheila Regan), “The Ordway’s Miss Saigon shows respect towards Asians: A cast member’s perspective” (Orville Mendoza)

I am a Vietnamese woman. This is my truth: You don’t get to decide how to honor and respect my history. - U.T.

I am a Vietnamese American, transracial adoptee, and man of color, and this is my truth: "Miss Saigon" is not my story. - A

I was born in Saigon and now a US citizen in Minnesota. "Miss Saigon" missed the boat my family and I took to get here. - Vi-Anh