The last time I attempted anything resembling gardening was when my brother and sister-in-law gave me a commemorative Barack Obama Chia Pet as a gag gift.  (Yes, this is a real thing.)  I followed the basic instructions; mix a paste with the seeds, cover the head, and keep it watered and in a sunlit place.  In just a few short days my diligence paid off when absolutely nothing came up.  This was appropriately symbolic, and happened right around the time when Obama was awarded the Nobel Peace Prize for…well that wasn’t exactly clear.  So I just bestowed the title of “Best Chia Obama Ever” on my newfound paperweight, and promptly forgot about it.

When it came time to participate in the EcoVillage community garden, I wasn’t exactly overflowing with confidence that I’d be able to grow much of anything.  I knew I wanted to try growing some kind of hot peppers, but didn’t have my hopes up.  I picked out some basic peppers from a seed catalogue (banana, bell, jalapeno, and thai chilis) and got my plot started.  The peppers have grown and multiplied beyond all expectations.  For those of you who have yet to do your own gardening, here’s why this is a problem…

…For the sake of illustration, let’s go with something that more people want to eat, such as strawberries.  When the first berries are ready for picking, you have a happily expectant feeling much like when a child is born or the Twins finally draw a playoff opponent other than the New York Yankees.  Strawberries are wonderful!  Who doesn’t love strawberries?  So you pick them, eating half of your crop right on the spot.

And them something snaps.  Your taste buds reject anything that remotely resembling strawberries.  This happened once before with a Nestle’s Strawberry Quik, but that was normal.  Everyone reacted that way.  You start to exhibit PTSD-like symptoms whenever you hear the Beatles’ classic song “Strawberry Fields Forever,” and if a small nuclear explosion were to wipe out that damned bush, you wouldn’t complain a bit.

Now, picture that exact same progression, except with something that has even fewer uses than strawberries.  It didn’t take long for me to wonder what the hell I was going to do with all these hot peppers.  I tried giving them away.  I tried announcing at meetings that people could come and see me if they wanted fresh, spicy stuff.  In retrospect, I probably could have phrased that better.  I became the crazy hot pepper guy.  (Ok, I already WAS the crazy hot pepper guy, but now it was even worse.)

So I found a few Hmong families and other folks who like hot stuff as much as I do, and we coordinate who gets to come to my garden plot on which days to pick however many hot peppers we need.  And still that wasn’t enough.  Peppers were rotting on the vine–unacceptable.  On a random, unrelated doorknocking session, I mentioned to a long-time Hawthorne resident that I was going to go out and buy a dehydrator to dry up my chili peppers so I could store them and use them in the winter.  He lent me his. 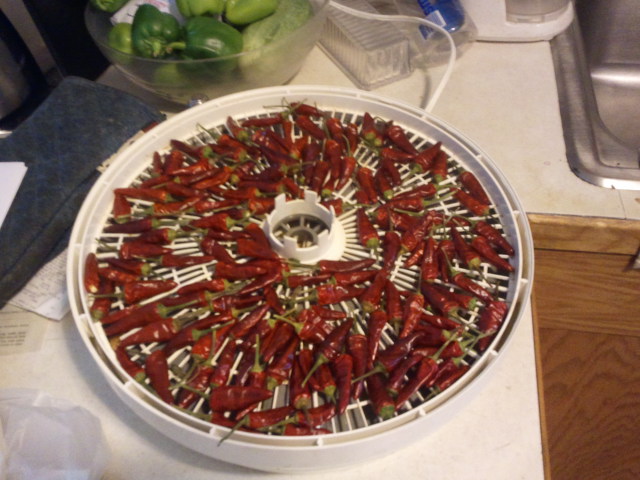 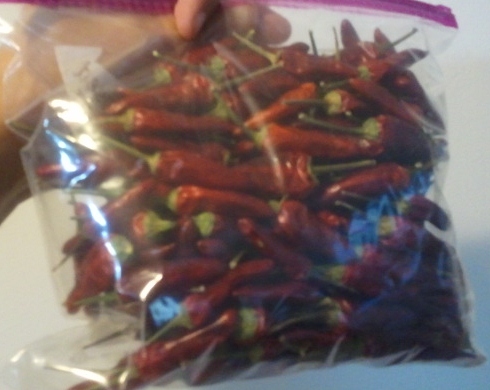 The hot peppers have led to a few people reserving spots in the EcoVillage garden for next year, and a newfound connection between myself and another Hawthorne resident.  But that’s not all.  When I started bragging to my good friend over at the Irving Inquisition about healthy eating from my garden plot, he showed me what he’s been up to lately.  (And by the way, I.I., when is your next blog post?  I know you’ve got to be p.o.’d about something.) 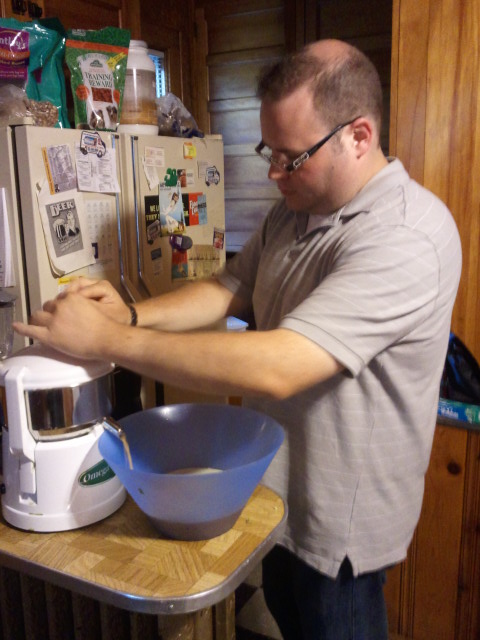 This here is what he calls “The BMW of juicers.”  By that, I take it to mean it only needs about forty pounds of fresh produce… 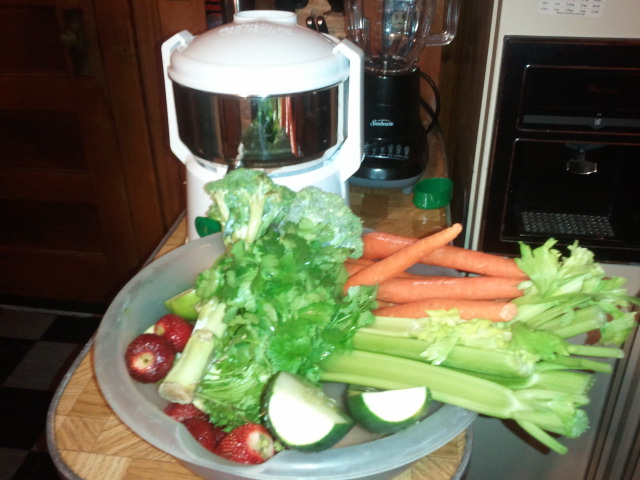 …to make about ten ounces of a barely-drinkable liquid-ish substance. 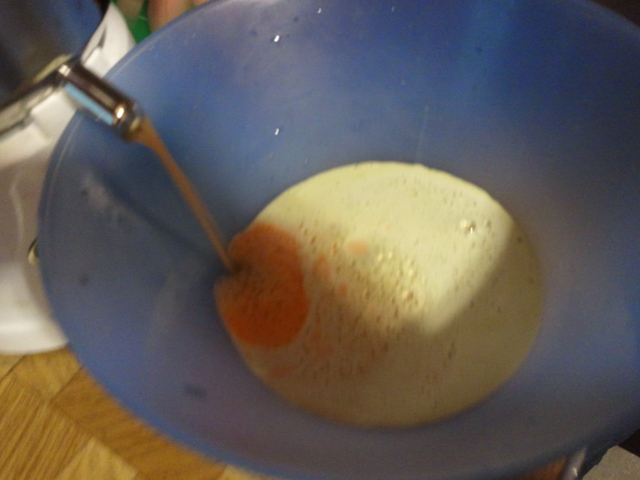 I know this looks like orange sherbet, but that’s as close as the resemblance gets. 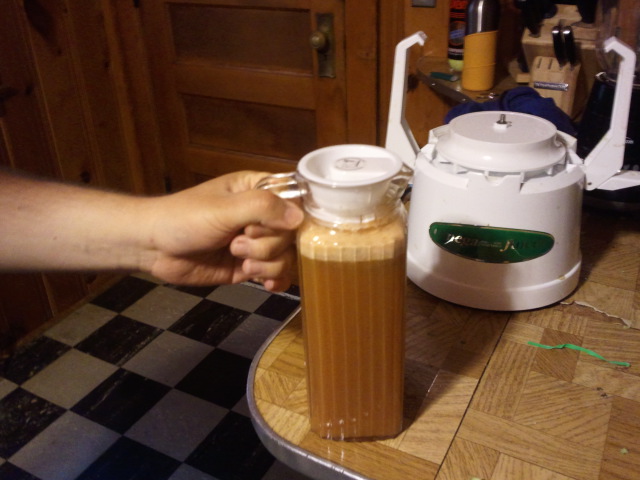 How is this even a natural color?  On the bright side, if he spills it on the counter top, it’s not like anyone would notice.

Once I started in with the criticism, I.I. shot back with, “Yeah, well I’ve lost forty-seven pounds over the past few months.”

“And I’ve lost fifteen pounds since the end of the Stanley Cup Playoffs, AND I was in better shape to begin with.”

But no matter how well I establish myself with the trash-talking, I know that his ace in the hole is coming up:  “And I can kick your ass in racquetball.”

With that, we settle on the agreement that perhaps the best vegetable-based drink is a bloody Mary with a beer chaser.  If anyone needs peppers to make the drink spicier, you know where to find me.