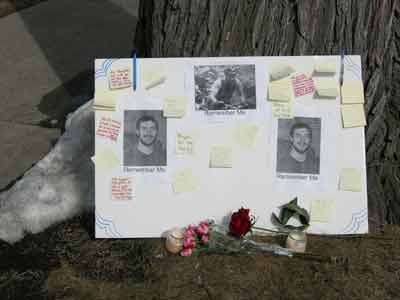 A memorial to Michael Zebuhr at 31st and Girard

More than 100 people attended a CARAG Neighborhood meeting at Bryant Square Park Tuesday in response to the murder of Michael Zebuhr, who was shot Saturday night while walking back to his car from a Calhoun Square restaurant with his mother and two others. Members of the community were still trying to wrap their collective heads around this senseless, random murder.

Tenth Ward Council Member Remington and interim Police Chief Tim Dolan stressed that Uptown remains a safe neighborhood, and that this kind of random murder is extremely rare. Dolan said he could practically name all of the victims of this kind of murder in Minneapolis in the last 20 years.

But many neighbors weren’t so sure. Some expressed dissatisfaction about the increasing number of liquor licenses being issued in the area. Resident Jeff Forrester said, “This was predictable. I don’t think it was isolated. It’s like bait—really drunk people on the street at night.”

Another area resident, advocating for CARAG’s new volunteer Stroll Patrol, said “Predators are viewing our neighborhood as their ATM. They don’t need to see this as their business opportunity.”

Others wondered whether the incident was the logical conclusion of an understaffed police force. As Al Flowers of the Minneapolis Police Community Relations Council put it, “It’s going to come this way. They’re sneaking around, finding out where the police are at.”

Asked why officials were stressing how safe it is in Uptown when robberies are up by more than 40 percent this year over 2005, Lt. Sue Piontek explained that so far this year there have in fact been only two robberies in the Calhoun Square area—one each of a person and a business. There have also been two aggravated assaults near Calhoun Square, but both represent a fight that took place at a local business. According to Piontek, most of the 43 percent increase since the first of the year has been in relative vicinity of Lyndale and 22nd Street.

Although robberies are up by 43 percent in the Fifth Precinct this year over last, some in the media have been reporting that crime is up 43 percent in Uptown, which isn’t exactly the same thing. (Uptown is widely described as bordered on the east and west by Lyndale and Hennepin, and on the north and south by Franklin and 36th Street.) And to further complicate the matter, the word Uptown is frequently being used in news reports about the murder as shorthand for the Calhoun Square area, even though that area is just a small section of Uptown. (You can view current crime maps and reports at http://www.ci.minneapolis.mn.us/police/crime-statistics/.)

Nevertheless, a big spike in robberies did occur in the CARAG and ECCO neighborhoods last fall. In addition, Piontek noted that panhandling, graffiti, and other property damage crimes factor into the overall perception.

Police are taking several new actions since the shooting. First, the Uptown Business Association is paying for two officers to patrol the side streets of Calhoun Square from 10 p.m. to 2:30 a.m. on Thursday, Friday, and Saturday nights. Second, the “directed patrol,” consisting of five officers and a sergeant, will be targeted more regularly to the Calhoun Square area between the hours of 6 p.m. and 4 a.m. These officers, Piontek said, are proactive and assigned to specialty details, or high priority areas, as needed.

In addition, come mid-May, shift officers will be on bike patrol in the area. And, at long last, about 15 new officers will join the city’s force in two months, the first of the 100 new officers the city will add in the next year.

Other efforts proposed to curb crime include reinstituting the juvenile unit for 18- to 24-year old offenders, Dolan said, and putting a “court watch” system in place for the community to track what happens to offenders once they are arrested. Remington said additional lighting and parking near Calhoun Square area are other possibilities, and that the city’s prosecution department also needs to be beefed up. But these proposals are probably not going to happen any time soon.

In the meantime, the community is mobilized. Fliers on every door near 31st and Girard announce a candlelight vigil in memory of Michael Zebuhr, 8 p.m. Saturday March 25 at 3116 Girard.