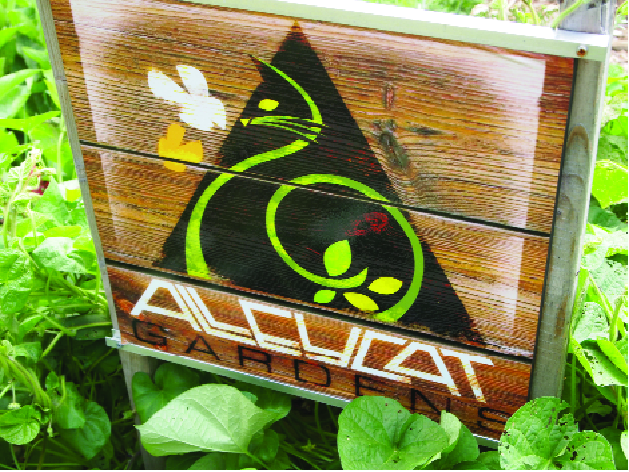 Deborah and Joe Pallansch grow their own grapes for jelly, and herbs, and have no mowable grass at home. They planted vegetables in a plot at the Waite Park Community Garden and were among several first-year gardeners at the site on 36th Avenue and Lincoln Street NE welcoming visitors during an evening stroll through the garden on Aug. 6, Community Garden Day metrowide.

The romaine lettuce bolted (grew tall and flowered) in the recent 100 degree heat, but that’s okay, they plan to harvest the “true to type” seeds to plant next year. Joe explained that the original seeds came from Eco Foods in Utah, sealed in a can, “they’re a better quality seed, and more germinate, so there’s less re-planting” to make up for non-viable seeds.

Deborah, pictured below tasting vegetables at a neighboring table, said her squash wasn’t doing what it was supposed to, she’d had to replant that and it was taking its time to snake under the corn (which was already producing ears). The beans in her “three sisters” area (beans, corn, squash) were also not forming yet, a mystery. 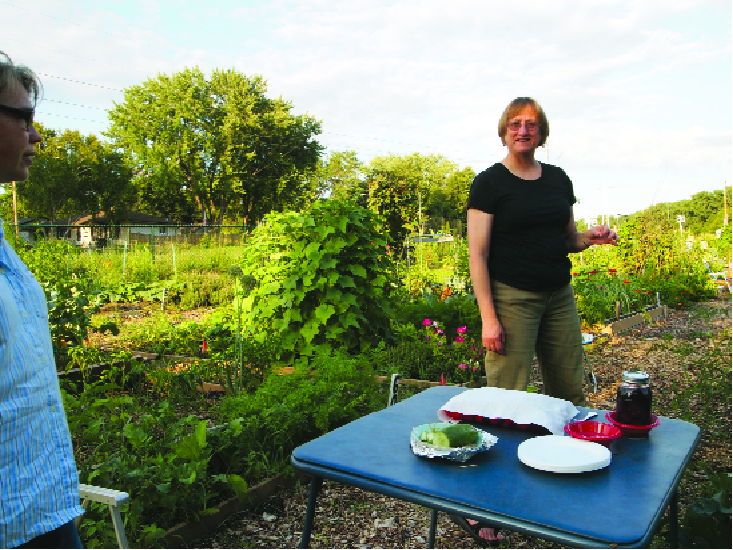 But the radishes produced well, four feet by four feet, “and we ate them all.” They’ve blanched and frozen lots of swiss chard and kale, and harvested eight cucumbers and a zucchini on the 6th. “I’ve been recording everything produced. The corn, we’ll harvest dry. We have a mill at home so we can make corn meal. I’m curious to calculate how much land it would have taken to support one person,” Deborah said.

The way the world is headed, people would be wise to know how to provide for themselves. “I bake my own bread,” Deborah said, “I start growing greens on a landing in spring, and will experiment with sprouting. The goal is to see how I can garden year-round and provide as much food as I can. Gardening captures the energy of the sun.”

Joe said that after the initial planting, garden maintenance takes about a half hour about twice a week.

Becky Gams said after she and husband Chris had their teens help with gardening, “my daughter turned into a food snob, which is good.” She’s off to college, and could feel how not-healthy dorm food was for her. 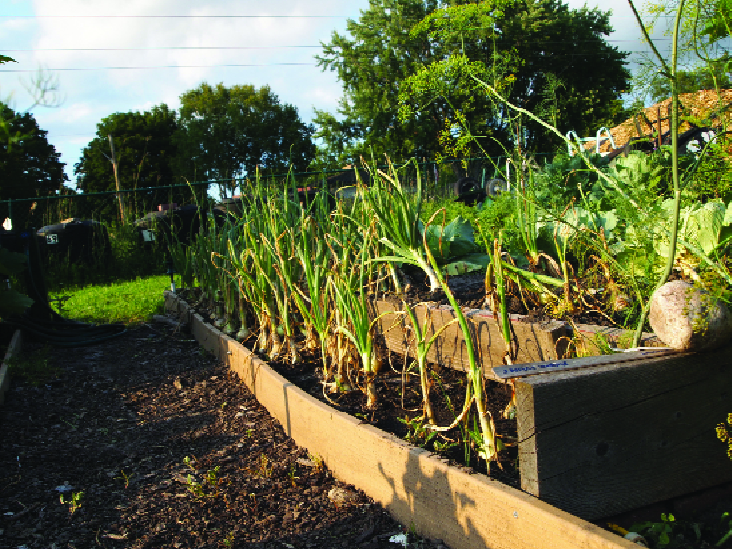 Lotte Melman, identified by others as a great gardener with some wonderful strawberries, turned the compliments to another gardener with a healthy crop of onions, Tom Schlee (Tom’s onions shown at right).

Dave Jensen turned up with a quart jug of Japanese beetle bait he thought he’d try. The garden, which has 72 plots, has been beset with the iridescent bugs and potato bugs “which are red,” Chris Gams said. The remedy to be tested was one cup water, a quarter cup of sugar, a mashed banana and a package of yeast.

Andrea Pearson offered samples of a spicy pickled beet, Jenny Welch offered caprese skewers (basil, tomato, mozzarella ball, balsamic vinegar and oil), various gardeners had salsas and pestos with fresh bread or chips. There was a corn and summer squash with cheese combination and greens with bacon. Two kinds of tea were offered: green tea with echinacea and mint, or chicory.

As the sun began to set, a few gathered to do an art activity, making plant matter prints on hankies with paint, and Pete Doughty from the Alley Cat Gardens stopped by to get ideas. 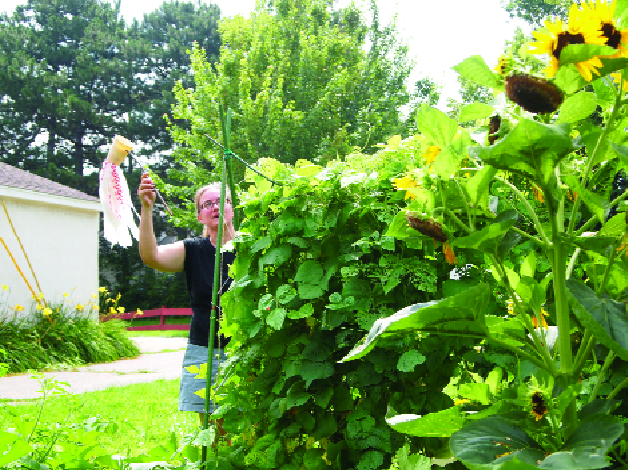 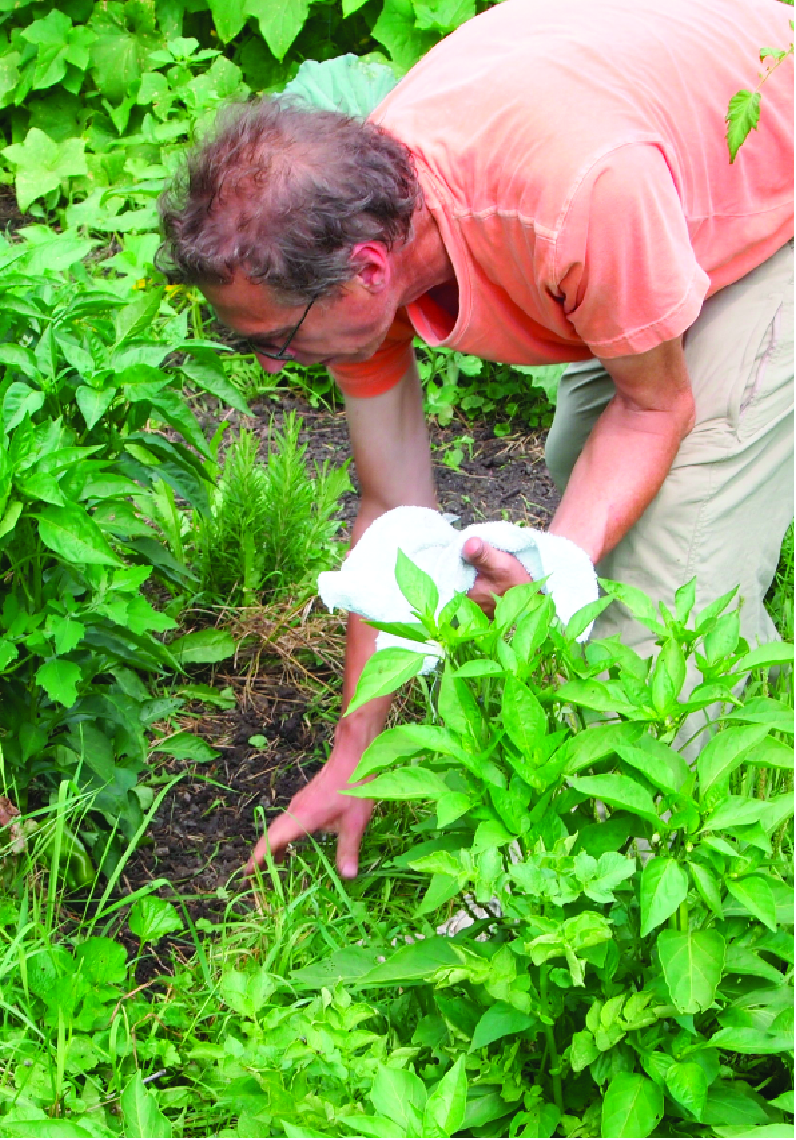 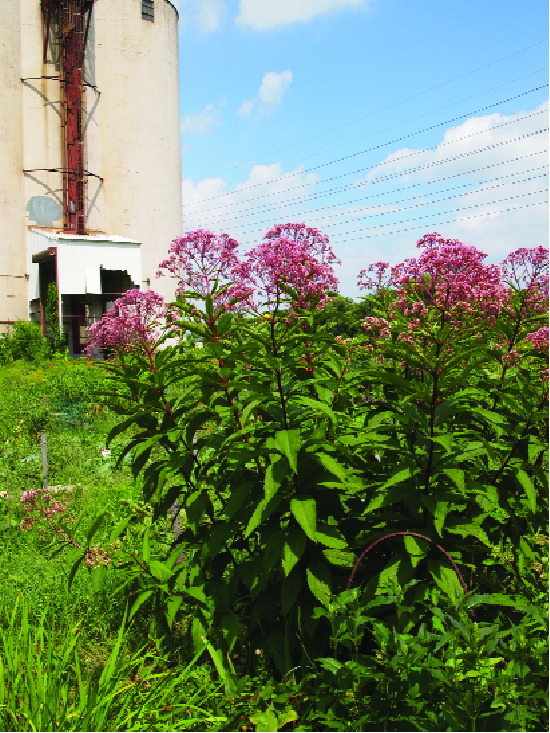 Photo above is Joe Pye Weed at Mulberry Junction on California Street NE. Below, Rhonda combines yarn and garden materials in an experimental wall hanging. 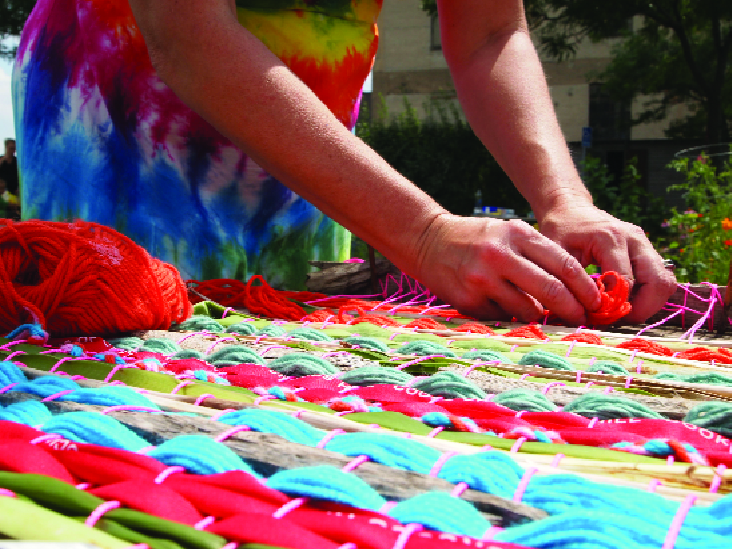 The rabbit below didn’t need fancy plates…was content to graze straight from the carrot garden, not at all scared by the human activity at the Waite Park Community Garden. 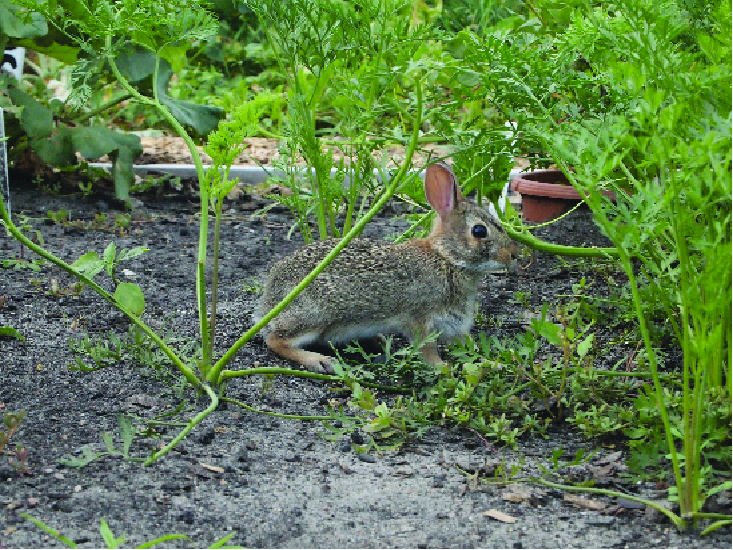