Despite the weekend being sticky, humid and just plain hot, thousands of Minnesotans from all nationalities gathered at Phalen Lake Park to celebrate all things Asian for a weekend of Dragon Festival 2011.

Elisa Laborte recently moved to the Twin Cities from New Jersey and was excited to attend her first Dragon Festival.  “I moved here for a job at Target.  It’s great to see people who look like me.  This is the largest number of Asians I’ve seen since I moved here.  It’s a great bonding experience.”

Laborte especially enjoyed seeing the cultural performances, which featured Asian musical groups from all over the Twin Cities.  Both Saturday and Sunday afternoons were filled with performances that represented countries such as India, Japan, China, the Philippines, Indonesia, Laos and many more. 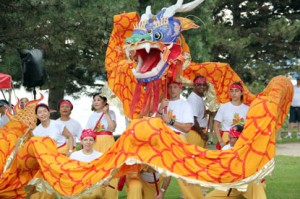 Laborte heard about the festival through her fellow Asian employees at the Target Corporation, which joined other major Twin Cities companies in sponsoring the event.

The Council of Asian Pacific Minnesotans, serves as the lead organization of the committee that organizes the event, put together with the help of several new and returning community members each year.

Ilean Her, executive director, CAPM, says turnout for the annual event topped 12,000. She cited the pleasant yet hot weather for the successful turnout.

“This has really become a point of pride for many of us,” said Her. “Not only does the Asian community attend, but many non-Asians as well. It’s such a good time for everyone, no matter what ethnicity you are,” beams the long-time Asian American leader.

The Dragon Festival Committee put together the two-day event for about $80,000. Fortunately, the committee did not have to rely solely on dragon boat race entrance fees to fund the festival. More than half of the costs were covered by corporate sponsorships from State Farm Insurance, Target, Medtronic, General Mills and many others.

State Farm had a very popular booth, where kids and adults played games and got free promotional items. State Farm Insurance Marketing Analyst Jeff Dobbin also participated in the opening ceremony, which involved “waking up the dragon,” to ensure those participating in the dragon boat races had a safe and fun experience.

“This was the first year State Farm didn’t have a team compete during the races, “that was due to logistical issues,” said Dobbin. “We’ll be back next year.  We miss not being in the water.”

Dobbin says it’s important for State Farm to participate in events like the Dragon Festival because it draws folks from diverse communities. “We focus on market opportunity. The Asian community in Minnesota is a growing market and many of our customers have Asian roots. Being part of this festival is a way to give back. We love it.”

The event took place despite the state government shutdown. CAPM is an agency in the State of Minnesota and technically Her and her staff are unemployed.

Her says the celebration of the Dragon Festival helped CAPM workers deal with their work status by taking their mind off the state’s budgetary woes.

“It’s a time to have fun and be excited to be Asian American, not think about the shutdown.  We are all here as volunteers because we love our community.” said Her.

Others who weren’t Asian echoed the sentiment.

Lisa Sharbo and her family drove to Lake Phalen from Eagan to be part of the festivities. She usually competes with her husband Pete in the dragon boat races, but this year she cheered Pete on from the short with the kids.

“We’ve attended the Dragon Festival for the past six years,” said Sharbo. “We definitely didn’t want to miss it.”

The Sharbos liked the new set-up for the races. In years past, practice racing was on Saturday and the competition was on Sunday. This year the competition took place both afternoons and the practices in the morning.

Event organizers decided to do it this way so participants wouldn’t have to come both days. The Sharbos think that was a great idea, because it gave them time to enjoy the event Saturday and focus solely on the race Sunday.

This year 26 teams competed in the dragon boat races. Many were corporate teams, others non-profit organizations.

“We are a support group.  But we’re not just sitting around, we’re sitting in a boat challenging our bodies, “ said Skrypek at the festival. “There’s a lot of research out there that supports exercise when you have breast cancer. We’re using this wonderful ethnic event to strengthen ourselves and promote our mission, which is to let people know there is life after cancer. You can do what you want to do.”

Jovita Bjorker, a native of Indonesia, drove to the festival from her home in Wisconsin. She participated in the Blue Cross Blue Shield 5K Walk Around Lake Phalen with her friends Natalie McDonald and Peni Moss.

“The walk was really fun.  It wasn’t easy, but it wasn’t really hard either.  It was a really pleasant time,” said Bjorker.

The walk around the lake was also a really good excuse for Bjorker and her friends to sample all the fine delicacies of the festival. The three sat at a picnic table and bought one of everything, so they could all sample a little bit of everything. Vendors representing a variety of Asian restaurants sold appetizers, entrees, desserts and traditional beverages.

Her says now that this year’s festival is over, it’s time to look ahead to plan next year’s event. She hopes the government shutdown doesn’t last too much longer; there is so much to do to make this an even bigger and better event next year.

Find out how to get involved with the Dragon Festival online at www.dragonfestival.org.