A new, more collaborative approach has increased family participation in spring conferences held at Battle Creek Middle School in St. Paul. This April, our Spring Conference turnout had a 7% increase from last year and a 19% increase from two years ago. 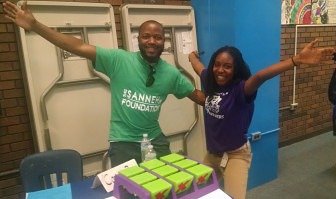 Principal Dr. Tyrone Brookins wanted to improve parent engagement and increase the number of parents and students attending our Parent/Teacher Conferences. A large amount of research shows that parent involvement in their child’s education will increase academic success for all students.

He decided to try developing “community-based conferences.” Fortunately we had community participants who were all willing and motivated to make this event happen.

There was a new, different vibe in the air for conferences this spring. BCMS students received prizes including new soccer balls and basketballs provided by the Sanneh Foundation and were able to practice Hip-Hop dancing along with the Arlington Hills Hip-Hop Crew and Dance instructor Daniel Adams under the direction of Community Recreation Specialist Kiarra McCain. The director of St. Paul Urban Tennis was there to describe opportunities and SPUT tennis coaches were in the gym instructing students. Joy of the People Artistic Director Ted Kroeten had JOTP soccer coaches helping students play soccer in their inflatable soccer field. Some of these JOTP previously played on their country’s national team. Some played for the MN Thunder.

Staff created three video walls. One wall displayed artwork of BCMS students, another had student yearbook photos and the final wall had video of our principal, staff and students conducting a hip-hop dance together called “Dance of the Ages”. Students and parents enjoyed seeing staff and students having fun together in such a creative way.

On the first evening of our conference, some students looked excited others looked pensive, but most of the Battle Creek Middle School students and parents were on a mission to meet with their son or daughter’s teachers in order to get valuable information and teacher feedback. Of course the most important goal was for parents and students to take teacher feedback and use it to improve academic performance. Many who attended conferences seemed to expect the same drill, routine and process from previous years, but something was different, new and exciting. There was a buzz of excitement in the air, anticipation of new possibilities and yes, even the notion that something “fun” was going on.

However, once they arrived on site they witnessed something entirely different. Parents and students caught a glimpse of an enormous inflatable soccer field, an outdoor volleyball court and kickball field at “The Creek”. They noticed a whirl of activity…running and playing… pick-up soccer and volleyball games taking place outside of school. They saw students and adults engaging in games running, kicking, being active and having fun. Once inside parents and students were greeted by student leaders, a whole host of community organizations and even hip-hop dancers! That’s right…in the middle of our school’s atrium some young, athletic and incredible virtuoso hip-hop dancers from Arlington Heights Rec. Center were dancing in unison to greet parents and students. Excitement!

All of this was going on while our traditional conferences were taking place. Some parents indicated that they were coming back a second night to attend our Community Conferences according to Assistant Principal Kris Chlebecek.

“Community Conferences” at BCMS were successful because teachers, staff and administration worked together. Furthermore, BCMS had a significant increase in parent participation and involvement, from 23% in 2013 to 42% in 2015

Blogs
Do NOT follow this link or you will be banned from the site!
X