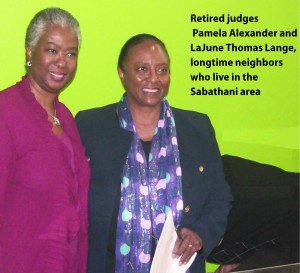 Sabathani Community Center, a building that takes up most of the block between 3rd and 4th Avenues South on 38th Street that once housed a junior high school, served as the launching pad for numerous individuals — from artists to athletes, to politicians to preachers, and countless others — since it opened as a center in 1966 to provide structured activities for area youth.

Last week the center announced a new cultural preservation project to introduce to some and reacquaint others to its rich heritage not only to the city’s South Side, but also to the Twin Cities at-large. “We Are Sabathani” is collaboration between the Council on Black Minnesotans and the Minnesota Humanities Center, and funded by money from the state Arts and Cultural Heritage Fund.

“We were happy and excited to find out that Sabathani did get the grant in June [2011],” says Sabathani Development and Communications Manager Pamela Russell Young.

The project is designed to tell the history and legacy of the building that over the years created and “maintains a unique synergy and the ability to nurture the aspirations,” said retired Judge LaJune Thomas Lange, who will co-curate with Anika Robbins, during the February 23 press conference. The two women will inventory Sabathani’s extensive art collection, conduct oral history interviews with past and present residents, and collect news articles and historical writings.

“Everybody has a story to tell,” said Lange, who adds that Sabathani is “a fertile ground [with] a lot of history.”

Robbins adds that she is looking forward to working with Lange in what she calls an “intergenerational relationship” on the project, which is expected to be completed by late spring. “Our target completion [date] is May 31,” she noted.

“We have a real rich history in South Minneapolis,” said a proud Myrtle Thomas, a Southside resident.

Rev. Billy Russell, pastor of Greater Friendship Missionary Baptist Church for 10 years, recalls that his members “informed me as soon as I got here about all that rich history.”

Before it was split up by Interstate I-35W in the mid-1960s, the Southside Black community “was a very close, tight community — everybody knew everybody,” recalled Pamela Alexander, who was the first Black woman judge in Minnesota in 1983.

Alexander listed off fellow Black Southsiders as Gary Hines, who later founded Sounds of Blackness, and Sharon Sayles Belton, who would be elected Minneapolis’ first Black mayor, along with Lange, who lived a few blocks from her. “We all grew up right here,” said Alexander. “I think that the closeness of it really brought us together, and you wanted to do your best.”

Today, South Minneapolis seemingly doesn’t have that closeness, believes Alexander. “Even though my mother still lives in the neighborhood, a lot of the older folk have either passed or [are] not in the community anymore. The movers and the shakers of the community and the people that kept us close-knit aren’t here any longer.

“Some of the institutions of the community aren’t here any more,” including both the junior high and Central High School that she attended, added Alexander. “St. Peter’s [AME Church] is still here, but Sabathani [Church] is gone. Even some of the after-hours joints and clubs that kept the community together are gone. We did a lot of stuff at [Nicollet Field, now Martin Luther King Park] but once the freeway came through…”

“The business people, the church people, the schoolteachers, the students: We all worked together, and we all had the same high expectations for ourselves and for our community,” surmised Lange, who lists musical notables as Percy Hughes, and the Lyles — Oliver, Bobby and Florence — along with Hines.

Now retired from the bench, Alexander pointed out, “Being the first always comes with a lot of responsibility.” She duly noted that her mentor, Joyce Hughes, who instead became a law professor first at the University of Minnesota, then later at Northwestern, should have been the first Black female judge. As a result, “I spent a lot of time making sure that I was setting a good example so that more and more Black women can be appointed [judges]” such as Lange. “I’m very proud that LaJune joined me,” said Alexander.

“I think any kind of way we can [we should] learn about our history, because we have a rich Black history. It is very vibrant today as it was years ago. We need to bring it out and let the public know about that, and let the kids know that they have a Black history that might make them more confident about themselves and give them a sense of belonging and sense of self,” surmised Sabathani Executive Director Clyde Turner.

“LaJune and Anika are the right people to do this job,” concluded Russell Young.

Those interested in participating in the “We Are Sabathani” project should contact Anika Robbins at 612-670-6355 or Anika@Anikain ternational.com