A Minneapolis Civilian Police Review Authority (CRA) meeting at City Hall descended into near-chaos March 7, following a presentation by Civil Rights Director Velma Korbel, who spoke about the city’s proposal to join the CRA with the Internal Affairs Unit for processing complaints against the police department. After giving the presentation, Korbel left the meeting, to a huge outcry by citizens attending the meeting who planned to speak during the public comment section. The citizens criticized both the proposal itself, which they believe reduces the authority of CRA, and that citizens haven’t been given any input into the process.

According to the agenda for the meeting, Korbel was to provide the update on the “Business Process Improvement” initiative along with Minneapolis Police Department Chief Tim Dolan and City Attorney Susan Segal, but neither Dolan nor Segal was present.

In her presentation, Korbel stated that a small group of staff from the Police Department, the CRA and from the City Attorney’s office began working on “top to bottom” look at the CRA process this summer. She said the group was sponsored by the Chief of Police, the City Attorney, and Korbel herself. “A couple of weeks into the review,” Korbel said, “what was quickly realized was that the external complaint handling was not just about the CRA but also about the Internal Affairs Division,” which also handles complaints against police officers. The group looked at other models across the country, including Seattle, San Francisco, Chicago, as well as St. Paul. While they were developing the proposal, the group approached “policy makers inside the city,” she said, including the mayor and the city council “to find out if they were supportive of the process,” before they began the process of engaging in the community, she said.

In January, the working group came up with a draft proposal, and met with Mayor R.T. Rybak and City Council Chair Barbara Johnson, both of whom were supportive, Korbel said.

According to Korbel, the new policy is “a radical change.” In the proposal, the CRA and the Internal Affairs Unit would be combined, forming a new body called the “Police Conduct Oversight Commission.”  Complaints, except criminal or management complaints, would be screened by the CRA Assistant Director Samuel Reid and Internal Affairs commander Lt. Travis Glampe, and would then be assigned to categories of mediation, investigation, dismissal, or Precinct Supervisor.

Complaints that were determined to need investigation would be looked at by two CRA investigators and seven IA investigators, who would make a finding of facts. The investigation would then go to the review stage, in which the CRA Director and Internal Affairs Commander would sign off on the fact-finding. Finally, the complaint would go to a Determination Panel, made up of two civilians (appointed by the mayor and city council) and two police officers. In case of a tie, Korbel herself would cast the deciding vote. Finally, the complaint would go on to the Chief of Police, who would ultimately decide the disciplinary decision, according to Korbel.

Korbel said the current proposal to the Mayor and City Council is for 14 members of a Police Conduct Oversight Commission. Seven of the members would have roles and responsibilities similar to what the CRA board now has, such as outreach, policy, review, and training. They would not, however be responsible for handling of complaints. The other seven people, who would ultimately be seated two at a time on determination panels, would be appointed as well by the mayor and city council, but would have an “analytic background” and be “independent thinkers.” They would not need to be Minneapolis residents, but could be business owners or work in the city.

In a question and answer session with CRA Board members after her presentation, CRA board member Justin Terrell (who announced he was leaving the board) asked Korbel if the working group would be seeking input from the board. Korbel responded that the CRA board would have input, but also said that she wanted “to get things moving.”

“I don’t want to create an expectation here,” she said. “I have gotten direction from the city council and the mayor that we need to bring back to them responses to all of those stakeholders. We want to be as clear as we can on the process with some changes. In terms of wholesale change — I don’t think that’s something that can apply. I don’t want to get to the next budget cycle and not have something moving.”

CRA member Mary Pargo stated that with all the extra citizens in the room (about 25, besides the CRA members), “something is not clicking right.” Pargo asked Korbel to clarify whether the Civil Rights department and the CRA were being meshed together.

Korbel responded that the decision that CRA would be a component of the Civil Rights department happened a few years ago. She hoped the changes to be “concrete” before July or August of this year, for the 2013 budget.

CRA member Austen Zuege expressed disappointment that the CRA board didn’t have any input into the new system earlier in the process. “I think of the CRA board as representatives of citizens in Minneapolis. They should have a stake in this process,” he said.

After taking questions from CRA board members, Korbel left the meeting, causing many citizen observers to react strongly that their voices were not being heard. “This is a façade!’ cried one person. “It’s time to listen to the people!” said another. “Let’s have some justice!” a third said.

Michelle Gross, President of Communities United Against Police Brutality, said, “This is outrageous!”

Following Korbel’s departure, a question and answer session continued between CRA board members and Assistant Director Samuel Reid. The meeting then continued until the public comment section of the meeting. 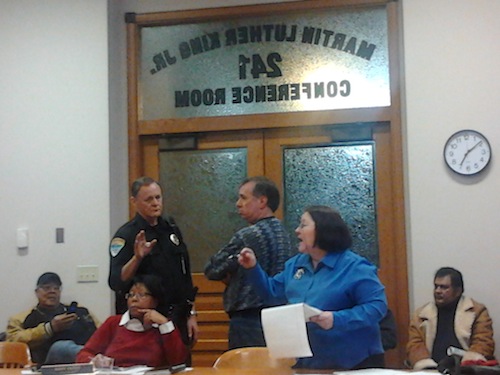 Michelle Gross was the first to speak, saying the meeting was “outrageously disgusting,” especially given that Korbel “goes running out the back door before the community has a chance to say a word.” Gross called the proposal “a complete gutting of civilian oversight. It’s top down with no community involvement.” The “conflation of Internal Affairs and the CRA” disallows the CRA board from any “finding of fact,” she said. “Why was this process developed by the very agency that CRA is supposed to provide oversight to?”

After Gross spoke for three minutes, CRA chair Donald Bellfield told her to stop speaking (three minutes was the designated time), but Gross refused. At this point everyone started shouting again and Bellfield said, “This meeting is adjourned!” and walked out.

Former CRA Dave Bicking then said that there was no motion to adjourn, so the meeting wasn’t actually over. Bellfield then returned, saying that he asked the security to come in to the room.

Two security personnel then entered the room and tried to regain control. “Everyone here needs to act like an adult,” one of them said. “If you can’t act like an adult, I’m going to have to close this meeting.” 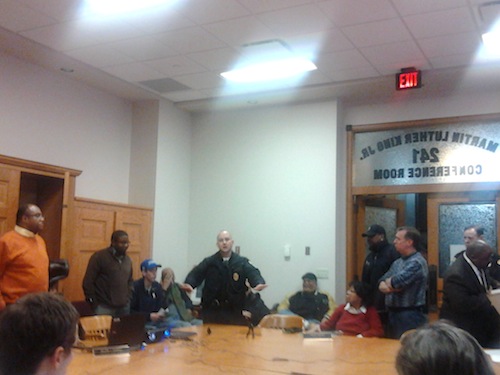 “This is a farce!” said Kenneth Brown, another citizen.

The security officer spoke again: “I’ve received numerous calls from people in this facility. It sounds like there is a riot happening in here! Who’s in charge of this meeting?”

Finally, order was restored, and it was decided everyone would speak for three minutes and then after that, if others had more to say they could.

Chuck Turchick then spoke, followed by Michael Friedman, Executive Director of the Legal Rights Center, who previously served on the board. Friedman said the new proposal is just the latest excuse to “bait and switch” because the “Police Chief doesn’t want to discipline.”

Charles Hallman, from the Spokesman Recorder, (who also served on the original committee in 1989) asked: “At what point can citizens have some reassurance, some constitutional protection? What has happened is that the CRA has disintegrated. It’s all a façade!”

Darrell Robinson, from CUAPB spoke and he said CRA combining with Internal affairs will “sweep everything under the rug.”  If the process is going to stay in place, “the community is going to take it over,” he said. “Those of you with paid jobs — you’d better find a new job.”

Dave Bicking said he was appalled by the turn of events. One of the worst parts of the new proposal, he said, was that people would have to submit their complaints directly to the police.  The complaints go immediately to the CRA head and the Internal Affairs head. “That’s not a process,” Bicking said. He also was critical of the notion that Korbel would assume responsibility of breaking a tie, during the determination panel.  “That gives me little faith,” he said.