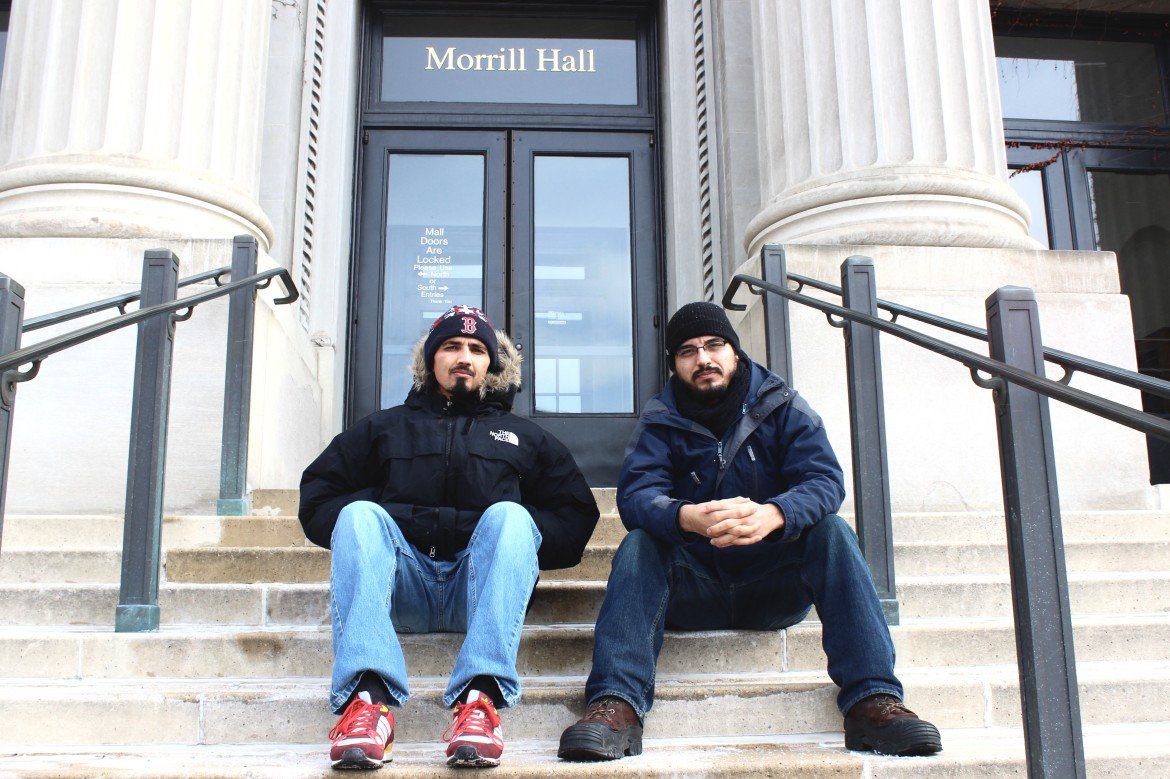 Rashaan Mahadeo (left) and David Melendez (right) sit on the steps of Morill Hall, where they were arrested in 2015 for protesting the University of Minnesota's commodification of diversity.

After walking up four floors of white marble staircases that looked out onto rows of chandeliers and carved ivory ceilings, I arrived in a small theater at the University of Minnesota’s Northrop Auditorium. On the top level of the pristine building, a panel discussion was scheduled on Feb. 11 by the equally lofty institutions of the University of Minnesota’s College of Liberal Arts and Minnesota Public Radio with the title, “Is there a right way to protest?”

The fact that the event was scheduled a year and two days after the university had 13 student protesters arrested on school grounds for demanding an end to racial profiling and lack of funds for ethnic studies departments strongly hints that the university has a clear, affirmative answer to the panel’s title question. Around a dozen students saw the university’s motives in the discussion and decided to take the dialogue into their own hands by protesting the MPR event.

“This question of if there’s a right way to protest, this university has already demonstrated that it knows the answer to this question. They are having a conversation, but not including people affected at this university, the Twin Cities and the entire nation,” proclaimed Ken Gonzales, one of the student organizers.

As MPR’s Tom Weber announced the all-black panel, after the original round of applause died down, a row of students in the front row continued clapping rhythmically, stood up with signs declaring messages from “Stop criminalizing dissent” to “Welcome to the anti-ebony tower” and took over the conversation. They passed out yellow sheets of printer paper with revised questions for the panelists, which included: “What structural conditions on campuses and in the community bring about protest? In other words, how is the University culpable in creating the conditions for which students are forced to protest?” and “How does arresting and jailing student protesters help students feel safe expressing dissent?”

The group of students from the newly formed Differences Organized! (Do!) coalition continued to occupy the panel’s stage for the rest of the discussion.

However, the students’ actions and frustration toward the university’s administration did not begin at this protest. For years, students of color have been actively protesting, advocating and campaigning for more equitable and transparent diversity policies since the late 1960s and beyond. And yet, problems persist.

“Protests aren’t just spur of the moment things,” said Natasha Moore, one of the protest organizers, in an interview the day before the panel. “They happen because the university resists to negotiate, to conversate and to follow through with actions. They resist to hear, to listen, to make any changes. So they force people into action.” 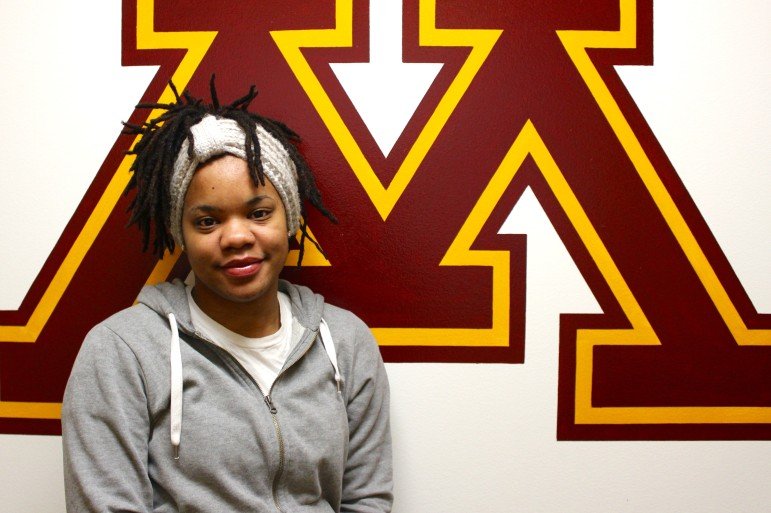 Moore discussed the organizers’ responses to the lived realities of students of color and other marginalized groups on the university’s campus, especially in relation to recent media focus on student activism nationally.

Just three days before the panel, David Melendez, Rashaan Mahadeo and I chatted in hushed voices on the second floor of Northrop Auditorium about the erasure of the work of marginalized UMN students, the commodification of “diversity” and how it is no coincidence that Dear White People was filmed on the same grounds on which we were sitting.

The day we talked was also coincidentally one day before the two grad students were allowed back into the building that houses not only the president’s office, but also the office for equity and diversity. Melendez and Mahadeo had been arrested for occupying Morrill Hall, UMN’s administrative building, as part of a protest organized by Whose Diversity?, an autonomous collective that aims to hold UMN accountable to a list of demands. Their demands include the prioritization of recruitment, retention and graduation of students from historically marginalized backgrounds as well as the need to engage with substantive, not just cosmetic, diversity.

Whose Diversity? has been trying to persuade the administration that the concept of diversity is not a commodity, or something that can be claimed or owned since 2014, according to Melendez. Its name was chosen in the tradition of student organizing at the university, giving nod to the Whose University? movement started in 2009. The first action of Whose University? was against the removal of campus murals that represented the African American Action Committee’s 1969 occupation of Morrill Hall and Chicano and Latino students’ subsequent 1970 takeover. Before last year, the only other time since 1970 that the president’s office had been occupied by protesters was in 2005, in response to the shutdown of General College. General College served to prepare mainly students of color and working class students before entering other colleges within the university.

About the mission of Whose Diversity?, Mahadeo added, “When you focus so much on this politics of representation by simply adding faces of color to a predominantly white canvas, it does little to interrupt the foundations of white supremacy and oppression and all types struggles that lie at the root of what we’re challenging.”

The MPR panel discussion was just one of many recent examples of superficial diversity and dialogue sponsored by UMN administrators that have succeeded in boosting the University’s image while drastically failing to actually benefit people of color and other marginalized university communities.

To start off the 2015-2016 school year, a group of students involved with Asian and Pacific Islanders (APIs) for Equity and Diversity protested the sudden August termination of Juavah Lee, who held the position of assistant director at the Multicultural Center for Academic Excellence (MCAE) and had been a role model for Hmong, Southeast Asian and Asian American students at the University for 24 years. Lee’s departure was part of a new direction for MCAE planned out by the Office for Equity and Diversity (OED) titled MCAE Forward.

Following the non-renewals of the contracts of Lee and MCAE’s former director, Fredrick McDonald, several other staff members left on their own accord.

“These personnel changes have given us the opportunity to reimagine what MCAE can be,” Abdullah said in his letter.

“When we found out [about Lee’s termination], it felt like a huge slap in the face for the Hmong community—on campus and in Twin Cities,” said Gonzales, a founding member of APIs for Equity and Diversity. “When he was let go, along with him was the community ties with Hmong community.” Gonzales added that after Lee left, although more than 5,000 Asian American students were registered at the University in Fall 2015, he could count on his fingers the number of Southeast Asian staff and faculty members on campus. 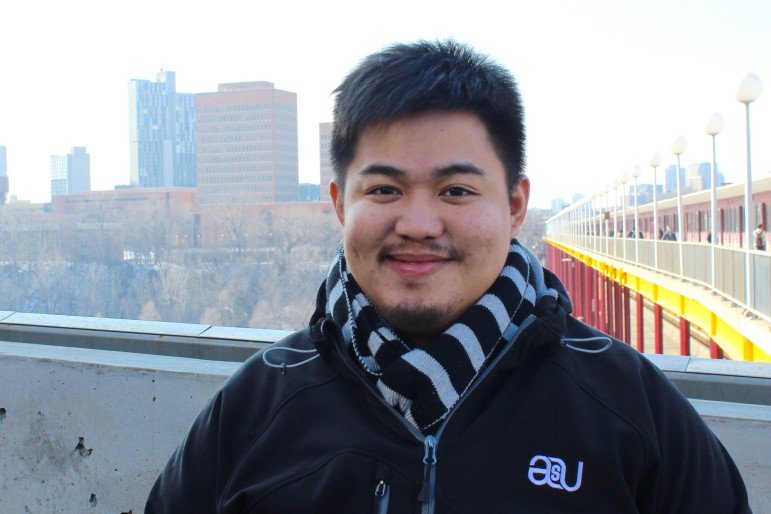 The departure of key MCAE programs coincided with Lee’s non-renewal. The civil engagement program he oversaw, which assists students academically and provides small scholarships, will cease to exist at the end of this semester. Lee now does not see how MCAE will attract students.

“The new direction definitely benefits the school and benefits the administration,” he says. “But it’s not benefitting the students. When you look at research, minority students aren’t doing well in college. Period. That’s why we [MCAE] are there. To support them socially, emotionally, academically. Now I don’t see how students can benefit from it.”

The general environment of the MCAE offices has also taken a turn towards the administration’s more sterile approach to the concepts of diversity and multiculturalism. I interviewed Moore at MCAE’s headquarters in Appleby Hall the day before the “Is There a Right Way to Protest?” panel. We walked down the hallways decorated with maroon and gold Gophers paraphernalia and kept peeking into rooms to find that they were occupied, even though no noise was exiting their walls.

Moore explained that since she completed a two-year faculty mentorship program sponsored by MCAE, she doesn’t tend to come around the offices anymore due to the new quiet and unwelcoming atmosphere. She also noted that the two staff members with whom she had formed relationships have left.

Throughout our interview, Moore continued to cite established policies that punish dissent and ignore the needs of students of color. For example, she has noticed a lack of funding for ethnic studies departments to the point where classes cannot be held because there is no money to hire teachers assistants. As a former athlete, Moore experienced firsthand intrusive drug testing procedures, which she says are supposed to be random but are conducted on black athletes at an unproportional rate. She also witnessed scare tactics that dissuade athletes from organizing.

“Scare tactics are set into place so people don’t feel like they have a voice,” she said. “People just want to get in here, get their education, get their sports and get out.”

The restructuring of MCAE also emphasizes the University’s focus on bringing in marginalized students without actually investing in them once they arrive. In 2014, the four-year graduation rate for black University of Minnesota students was a dismal 30 percent, according to the Minnesota Private College Council. This fall, a program titled CORE 2025 launched to attract top male eighth graders of color to the University. Moore claims that the administration is putting an excessive amount of funds into the program but will not disclose how they are spending them. Lee explains that recruiting high performing students of color will indeed increase retention and graduation rates, and will therefore look good for the university’s rankings and pocketbook, but will ignore the needs of average students of color, who are the ones that benefit most from support once in college.

Melendez argues that CORE 2025 is “operating under the same American exceptionalism — get out of the hood, leave your community behind, we are going to invest in you and we are going to disregard everyone else.”

The university once again disregarded the safety of its students of color by failing to issue a crime report this fall when white supremacist terrorists threatened lives at the Fourth Precinct occupation, directly next door to the university’s Urban Research and Outreach-Engagement Center.

The U is not Mizzou

With this culmination of an overall lack of support for students of color and a growing number of unhelpful policies, students are organizing. This is evident in the protests against MPR’s panel and Lee’s termination, last year’s Morrill Hall takeover and a Minnesota to Mizzou rally held this fall.

“This Minnesota nice environment really lends itself to different communities pushing some of the issues we have under the rug,” says Gonzales.

Another possible reason that student activism at the U has not reached the extent of protests at other schools around the country, such as the University of Missouri or Yale, is because of its rather unique demographic makeup.

“New immigrant and refugee populations have only been here less than 50 years,” explains Gonzales. “With that regard, working to understand how the gaps generationally impacted the experiences of students and how families impact student involvement in these spaces, it is a fact in that we have a different kind of demographic in the Twin Cities than other communities in the midwest and in the entire nation.”

He concluded that for these reasons, rehashing and recycling organizing tactics from different communities may not be the answer in Minnesota.

Mahadeo and Melendez also acknowledged that the black-white binary is much less prominent in Minnesota as it was in the successful actions at Mizzou. They see coalition-building as necessary in the next steps toward substantial progress. Mahadeo argued that the way to form more powerful coalitions is “seeing your struggle in another person’s struggle and seeing those struggles as inextricably linked.”

Whose Diversity?, APIs for Equity and Diversity and Do! will continue to fight for substantial, not just superficial changes, in UMN’s policies, programs and vision of “diversity.”

As Gonzales declared at the Feb. 11 protest, “Incremental progress is progress for the oppressor.”