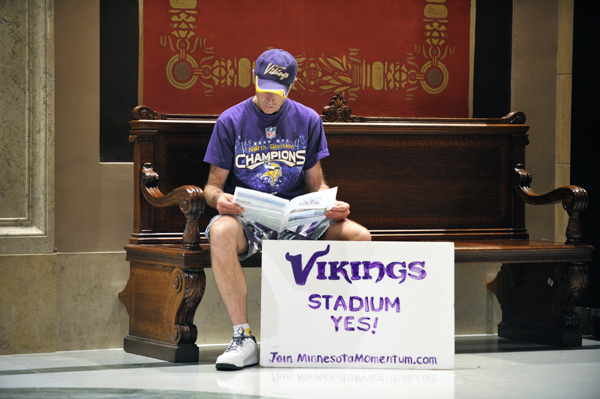 In the team’s third game last season, quarterback Brett Favre rolled out and somehow found Greg Lewis in the back of the end zone for an improbable 32-yard touchdown with 2 seconds to play to give the Minnesota Vikings a win over San Francisco.

The team’s hopes for a new home may need a similar kind of fortuitousness.

The House Local Government Division narrowly approved a stadium-funding bill at about midnight May 4. A little more than 10 hours later, the House State and Local Government Operations Reform, Technology and Elections Committee defeated the measure 10-9.

Its companion, SF3399, remains alive in the Senate, where Sen. Tom Bakk (DFL-Cook) is the sponsor. The potential exists a bill could be passed by that body and sent to the House for a vote. Supporters could also try to add the bill as an amendment to a different House bill.

“Nothing’s ever dead around here,” said Rep. Loren Solberg (DFL-Grand Rapids), the sponsor of HF3825. “It’s on life support. I said it was in the hospital on oxygen, but it’s still living.”

Rep. Mark Buesgens (R-Jordan) is OK with that as the May 17 constitutional adjournment gets closer. “My hope is we park this bill until the governor has signed into law a balanced budget. At that point I’ll even make the motion to reconsider.”

Introduced May 3, the bill initially called for the Vikings to pay $264 million in upfront costs toward a $791 million fixed-roof facility. The remaining $527 million would be financed over 40 years from four sources: jersey sales would be subject to the 6.875 percent state sales tax; a 1.5 percent hotel surtax; an increased rental car tax; and a sports-themed scratch-off lottery game ($5.5 million).

“It’s very clear the majority of Minnesotans want the Vikings here, and no General Fund money would be used,” said Rep. Morrie Lanning (R-Moorhead). He added that if the team were to leave, the state would lose $20 million or more in annual revenue, funds that go toward things like health care and education.

However, Gov. Tim Pawlenty quickly said he would not sign any stadium bill containing a tax increase.

A new plan was unveiled about 38 hours later that, although site neutral, references a facility being built in Minneapolis. It called for the Metropolitan Council to issue revenue bonds backed by an upfront team contribution, and then use a portion of Minneapolis hospitality tax revenues now used to pay off debt for the Minneapolis Convention Center once that debt is retired. It kept the sports-themed lottery game.

“This would give them an opportunity to be able to come up to the plate with this proposal and negotiate,” Solberg said. “It doesn’t say they have to.”

“They can negotiate without a bill, too,” said Rep. Gene Pelowski Jr. (DFL-Winona), chairman of the state government committee. He asked if the city had agreed to the proposed funding. Lester Bagley, the Vikings vice president of public affairs and stadium development, would only say there have been conversations. The team’s projected $211 million contribution is based on a one-third cost of an open-air facility. Bagley said a roof benefits the state and community, and they should pay for that. He also indicated the team owners aren’t excited about a 40-year lease, but would give it consideration.

In addition to stadium capital, tax revenue imposed to pay for the convention center could be used for public safety services in the downtown taxing district or to pay capital and operating costs of the Target Center. “This just gives Minneapolis more flexibility if there are additional funds that are generated from that particular tax,” Solberg said.

Although funds would exist until the convention center is paid off in 2020, Minneapolis City Council Member Elizabeth Glidden expressed concern of taking future funds that could be used for things like capital improvements. The facility will be 30 years old when the bonds are paid off.

“Nothing should happen to reduce the ability of the convention center to produce economic benefit to the state and to the region,” she said, adding the center’s economic benefit is about four times what may be produced by a stadium.

The city views the team as a statewide asset, and as such, Glidden said stadium funding should come from more than just Minneapolis. Forty percent of the team’s season-ticket holders are from outside the Twin Cities metropolitan area.

The team says it needs a new facility because its revenues are at the bottom of the NFL and the fan experience at the Metrodome is poor.

“On a tax basis, as well as a net-income basis, we are losing money,” said Steve Poppen, the team’s vice president of finance. “We will this year, and we did last year.”

Team officials have said they would not sign a new Metrodome lease once the current one expires after the 2011 season, leading to relocation rumors, even though owner Zygi Wilf has repeatedly said he would not move the team. However, Bagley wouldn’t rule out Wilf selling the team to someone who could relocate the franchise. “We’re committed to getting the job done here,” he said.

Poppen said Wilf purchased the team for $600 million in 2005, and reports, such as Forbes, put the team’s current value at about $800 million.

Rep. Ryan Winkler (DFL-Golden Valley) questioned if a new stadium is a pressing need when the state’s budget has yet to be balanced. He said the team could continue to play in the Metrodome without a lease, as the Minnesota Twins did before Target Field opened.

“Minnesota Vikings fans and Minnesota taxpayers deserve to know whether they need to pass this bill this year to save the Vikings from leaving or whether we have time, and have time to deal with more pressing priorities first and can deal with a stadium issue sometime in the future.”

“It’s up to you to move the process forward, but again I would make the case as to why now,” Bagley countered without directly answering the question. “The construction costs are down 9 percent, interest rates are at a 20-year low, we have an opportunity to create 7,500 construction jobs, preserve jobs that currently exist at the Metrodome and some ongoing jobs going forward. … We know you have a lot of other issues, a lot of priorities, but we believe it’s urgent that this issue get addressed.” Bakk said waiting another year would add $50 million to the price tag.

“What I want to be clear is that the Vikings aren’t willing to tell us that we need to pass a bill this year in order to save the team,” Winkler said.

Since 1992, Bagley said 28 other NFL teams have either moved into new stadiums or renovated a facility, such as Chicago and Green Bay.

“I don’t like to try to solve problems when everything is under the gun,” Solberg said. “If you do things with a threat over your head or under the gun, you may not be making the right kind of decisions. This gives the city and any other entity an opportunity to be able to move forward with negotiations. That may take a while. If it doesn’t work out they’ll be back here.”