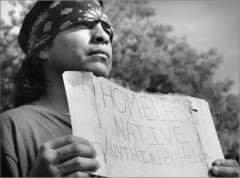 "Daily Dan," a homeless man who did not give a last name, panhandles Monday near University Avenue and Interstate 35W.

The plan, “Heading Home Hennepin,” was constructed by a 70-member city and county commission, intended to represent all sectors of society, including business leaders, religious leaders, former homeless people and humanitarians.

Until the 1980s, homelessness was not prevalent in Minnesota, Dorfman said.

The plan would add more homeless outreach programs, educate the homeless about government benefits and create facilities where many resources for them would be available.

But because of government cutbacks in rental assistance programs such as Section 8 housing, large community institutions for returning veterans and other programs, homelessness grew into a national issue during the 1980s and 1990s, she said.

“Since then, people started trying to address this problem and reduce homelessness by building homeless shelters, which helped manage the problem and not end it,” she said. “This plan aims to end it, which is an attainable goal.”

The commission developed the plan over 100 days after researching the 10-year plans of other major cities which have seen positive results in their communities, Dorfman said. There are over 200 communities with similar plans.

Philadelphia, for example, reduced homelessness by 50 percent in the first two years of its plan, she said.

Organizers said the program will reduce the number of shelter beds in the community, eliminate panhandling, create a safer environment, eliminate homeless children in public schools and reduce rates of teen pregnancy.

“The misconception is that homeless people are bums, when in actuality 40 percent of homeless are children,” she said.

The plan is estimated to cost $147 million, with $102 million from existing federal and state funds. That’s $45 million worth of funding to be secured.

“One of the challenges is addressing the gap,” said Rybak spokesman Jeremy Hanson.

He said some of the gap will be filled by private contributors and other charitable foundations.

“We are optimistic about the plan and that the gap will be filled,” Hanson said. “This is a community problem and many people are taking on to themselves to get involved.”

But not everyone is optimistic about the plan, including homeless people.

A homeless man, who goes by George and said he would not give his last name because of his criminal history, said ending homelessness is unrealistic.

“Sure the plan sounds nice, but even if I could find a job, I wouldn’t be able to afford rent,” he said. “(The) economy isn’t that great, so you got to live day to day.”

George, who said he has been homeless for 20 years, said ending homelessness won’t completely happen because some of the homeless he knows enjoy their lifestyle.

Dorfman said she is unsure of what specific role the University will play in the plan, but knows the community as a whole will be involved.

One of the results from the plan will be lower crime rates because police will be able to focus resources on crime and not have to deal with homeless people, she said.

He said there have been some instances in which people were assaulted by homeless people on campus and a few times in which faculty members came into their offices at night to find a homeless person sleeping there.

“Homeless people do tend to migrate to the University (rather) than other neighborhoods in the city because of the open public space,” he said.

Although it is a popular place for homeless people, he said, it is different than other parts of the city because there are no shelters for them.

Hestness said he is skeptical that the plan will fully end homelessness.

“You can definitely reduce homelessness, but it will never be 100 percent because there are always a certain number who choose not to live in the structured housing,” he said.