Business owners and community organizers may look like two completely different interest groups from Washington, but in the neighborhoods of Minneapolis and St. Paul, they have forged alliances that work. Two St. Paul stories highlight successful partnerships between businesses and community organizations.

Part of what helps bridge the gap between commerce and neighborhoods are non-profit organizations—both those who aim to support businesses and those who aim to develop community. One such organization is Riverview Economic Development Association (REDA), an organization founded in 1983 by a group of St. Paul’s West Side business owners. According to its website, the business owners developed a strategy that would provide leadership in community-based economic development and would become a catalyst for commercial and public improvements.

Brian Gioielli, from REDA, said that the organization could not achieve its mission to create a thriving business community without partnerships with community-based organizations and residents.  One way to create those partnerships, he said, was for staff and board members of REDA to serve on other boards, and to include their input in decision-making. “We try to make decisions in a thoughtfu,l partnered way,” he said.

REDA has strong collaborative partnerships with Neighborhood House, the West Side Citizens Organization, and Neighborhood Development Alliance, as well as with local churches and the city’s District Councils.

“Working with business owners—that’s the most critical part of the work that I do,” Gioielli said.  “We partner with local business owners at every turn.”  REDA provides services for businesses, hosts networking events and educational seminars, and creates programming to support them, such as a buy local campaign that REDA initiated.

REDA plays a crucial role as a communicator and leader, Gioielli said, both between different business owners and between neighborhood organizations, residents, and the city.  “We make sure the voices are heard, whatever the solution might be,” he said.

REDA has been involved in different community planning processes, with District del Sol being a prime example. REDA is the central organization for St. Paul’s Cinco de Mayo Festival as well as Music and Movies in the Park in District del Sol.  Gioielli said when the organization surveyed people who came to the Cinco de Mayo Festival, 90 percent of them said they’ll come back to District del Sol within nine months.  “It’s important to create an identity for an area, so that it’s not just one business that’s successful, but we all can be successful.”

REDA produced a video that shows businesses and community organizations discussing the ways they work together to build the neighborhood.

REDA helped come up with branding and initiatives for District del Sol, and is now is working on two other processes, on Smith Avenue and on the Robert Street and Cesar Chavez intersection.  Sometimes, Gioielli said, people have different ideas about the future for those areas.  “An organization like REDA can help flesh out the different options to find the best solution for everyone,” he said.

In the case of ASANDC, building relationships with business partners becomes even more crucial in a time when University Avenue is preparing for the light rail to come through.

Nieeta Presley, Executive Director of ASANDC said that her organization tries to encourage patronizing local businesses.  They are also working with the Neighborhood Development Fund to help those who own businesses in the area to improve and enhance their business skills.  “The local economy is the stable force of communities,” Presley said.  “We’re really setting up an identity and helping to create a destination place for the community so that we are creating that essence for marketing.”

What does a strong relationship between businesses and communities entail?  “When you walk into the store, they greet you by name,” Presley said.  In turn, ASANDC uses local businesses for events when they need catering, for example.  “These businesses are always going the extra mile—giving discounts for people that live the area, providing space for meetings, and they buy ads in the newsletter.”

With U7, a collaborative of seven different nonprofits in the Twin Cities assisting businesses on University Avenue preparing for light rail construction, ASANDC has been involved in developing marketing inventory, and is looking at lending for façade improvement loans.

For the most part, businesses and residents see eye to eye, Presley said, though there has been some tension over the parking issue.  “We know there’s going to be less parking for business,” Presley said.  “We don’t want parking for businesses to infringe on residents.  We’re trying to working on parking issues together.”  Strategies that have come forward for discussion include deferring taxes for businesses, and having the city reduce the number of parking spots required for businesses.  There is also talk of sharing parking spots, particularly for businesses that have different hours of operation.  Another possibility is building more parking ramps, possibly incorporated with another project, such as one that would include affordable housing with commercial at the bottom.  “We need to explore it more fully,” Presley said.  “Parking is a huge issue.”

Because the Aurora Saint Anthony area is so diverse, there are also relationships to nurture between different cultural groups, and businesses and organizations can be a part of that.  Building those relationships and strength within the community have positive results, as in the case of Flamingo restaurant. The restaurant almost went under last year when a power outage destroyed their refrigeration, which wasn’t covered by their insurance.  Neighbors came forward to give extra support to the restaurant through patronage, Presley said, and her organization made it a point to let people know to help the business out “to show local support.” 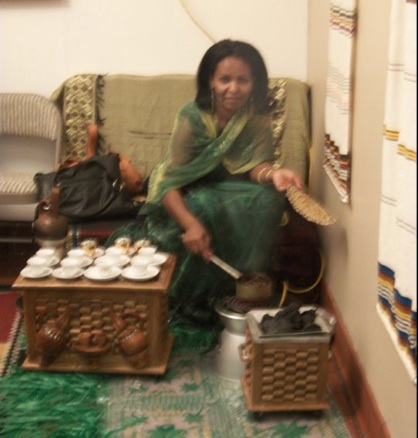 Flamingo restaurant survived the crisis, and is giving back to the community.  Not only does the restaurant offer space to Aurora Saint Anthony for community meetings, but co-owner Shegitu Kebede, who won the McKnight Humanitarian Award in 2006, says the restaurant has plans to partner with Gordon Park High School, an alternative school, mentoring students.  Kebede will be giving seminars and mentoring students next fall, and students will come to the restaurant to learn about the business. (Photo, left, from Flamingo Facebook page.)

Kebede says she knows personally what it means to be a struggling teen. She herself was a pregnant teenager and has been in poverty.  “It’s kind of personal for me,” she said.  “I wanted to empower people like that.”  In addition to offering mentorship opportunities at her restaurant, she said she hopes to connect the students to other restaurants in the neighborhood.  She ran a similar program in Minneapolis.

Though Kebede’s desire to help others is an end in itself, she also says that it helps her business.  “When we connect with each other, we create visibility,” she said.  “It’s a silent way of marketing.”

As Bruce Johansen writes in his introduction to this month’s focus on neighborhoods, today’s economy poses tough challenges to neighborhoods, but when businesses, nonprofits and residents work together, they can make a difference to create a better place to live.