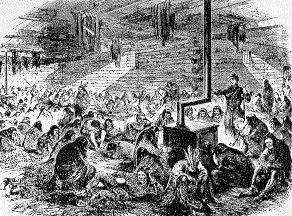 Sunday marked the 148th anniversary of the largest mass execution in American history, in Mankato following the U.S.-Dakota War of 1862. I’ve written before about the conflict; on Sunday the Mankato Free Press and columnist Nick Coleman each touched on the execution.

In Our View: Heeding a history lesson, the Free Press staff writes:

Today, as on many a Dec. 26 of decades past, the Dakota Indians will commemorate the hanging of 38 of their ancestors in the largest mass execution in U.S. history.

They will hold a ceremony at Mankato’s Reconciliation Park to remember this dark time in our history. 2012 will mark the 150th anniversary of the hangings.

Already there are preparations at the Minnesota Historical Society for a large exhibit and report on this significant historical event. Ancestors from both white and Dakota sides will be interviewed. Memories will come forth in a narrative that will be a somber reminder on the price paid by what seems like it could have been an avoidable conflict.

Many Mankato area residents know the story, although more and more it seems, some young people have not paid as much attention to it as their elders. . . .

. . . We should give pause to any reaction to declare a winner in a conflict that extracted so much violence on both sides. As we’ve watched the Dakota commemoration over the years, we see that spirit running through the ceremony. Many non-Indians have been invited and welcomed to the ceremony.

So it’s difficult sometimes to face an annual reliving of sorts of this dark chapter of U.S. and Dakota history, but it’s also a living reminder the reconciliation is just as important to history as the conflict itself.

Read the whole editorial at the MFP. Now writing at his own website, The State We’re In, Coleman notes in Minnesota’s Darkest Memory: The Hanging of the 38:

Dec. 26, 1862: The execution of the 38 Dakota warriors at Mankato: Revenge and rage drove the flawed legal proceedings behind the kangaroo-court convictions of 303 Indians who surrendered after the U.S.- Dakota war of that autumn. Only President Lincoln’s aversion to mass punishment limited the hangman’s toll to 38. But the stain of those official killings, followed by the official banishment of the Dakota Sioux from their home (banishment or extermination was the state’s policy) left a mark of shame on Minnesota that has colored all the years since, and which has made it almost impossible to even talk about the events of 1862. Now, proposals have been made to extend a posthumous “pardon” to one of the hanged. Pardoning one man doesn’t even come close to an official recognition of the wrongs done to the Dakota, or to comprehending the scale of an avoidable tragedy that claimed hundreds of lives on all sides of the racial divide that was the cradle of Minnesota’s birth. . . .

After reviewing his extensive history of learning and writing about the war and its aftermath, Coleman includes his column from December 19, while observing that through the comments on columns about the conflict published at the Strib, he’s discovered:

through the kind of readers’ comments those efforts have received that the well of ignorance and outright racism remains deep and largely unplumbed in this state.

There’s a great deal of truth in that observation. What will the 150th anniversary of the war draw from most: the spirit of the commenorations in the park today–or from that poisoned well at which so many readers of Coleman’s columns drink?

On December 23, MPR aired a segmented about how a New documentary remembers largest mass execution in US history:

– The largest mass execution in U.S. history occurred 148 years ago, when 38 Dakota warriors were hanged from a single scaffold in Mankato.

The shock waves of that mass execution still reverberate today among the Dakota people. A new documentary film remembers the 38, and also a group of Dakota who ride on horseback each year at this time to Mankato to commemorate the executions of Dec. 26, 1862.. . .

At the end of Dakota 38, the filmmakers reveal that one of the young men featured in the film recently committed suicide.

Dakota 38 co-director Sarah Weston, a member of the Flandreau Santee Sioux Tribe, said the suicide is part of what she calls the ‘historical grief’ left over from the traumatic collision in the 1800’s between Native Americans and white settlers.

One of the film’s messages, Weston said, is that the Dakota and other Indians should take a simple but difficult step: forgive the misdeeds of the past.

“The past is really, really traumatic,” Weston said. “But we’re going to reach our hand out and say that we forgive. Because when you’re not in a forgiveness place, you’re linked to that person or that trauma for the rest of your life, all day long. And so by forgiving we’re no longer linked to that.”

A point worth reflecting on in a dark and snowy December.

Image: Condemned Dakota men in the Mankato prison. Via The Dakota Conflict Trials.