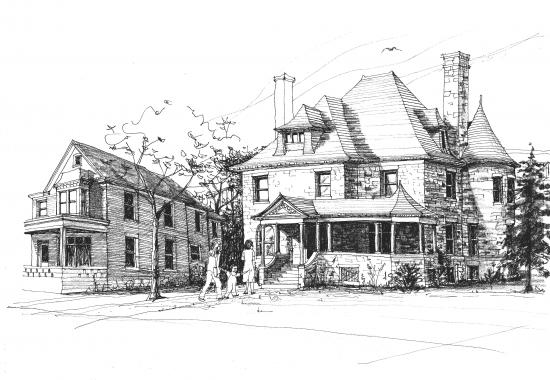 In a touch of irony, wood stolen from White Earth Reservation land was used to build the Henry B. Frey House, which is now becoming the American Indian Movement Interpretive Center (AIMIC).  The old Minneapolis mansion at 1206 5th Street SE became a University of Minnesota fraternity house for many years and then housed Heart of the Earth Survival School. Now it will become a center for collecting, organizing and preserving American Indian history for students, scholars, and especially American Indians interested in their history. 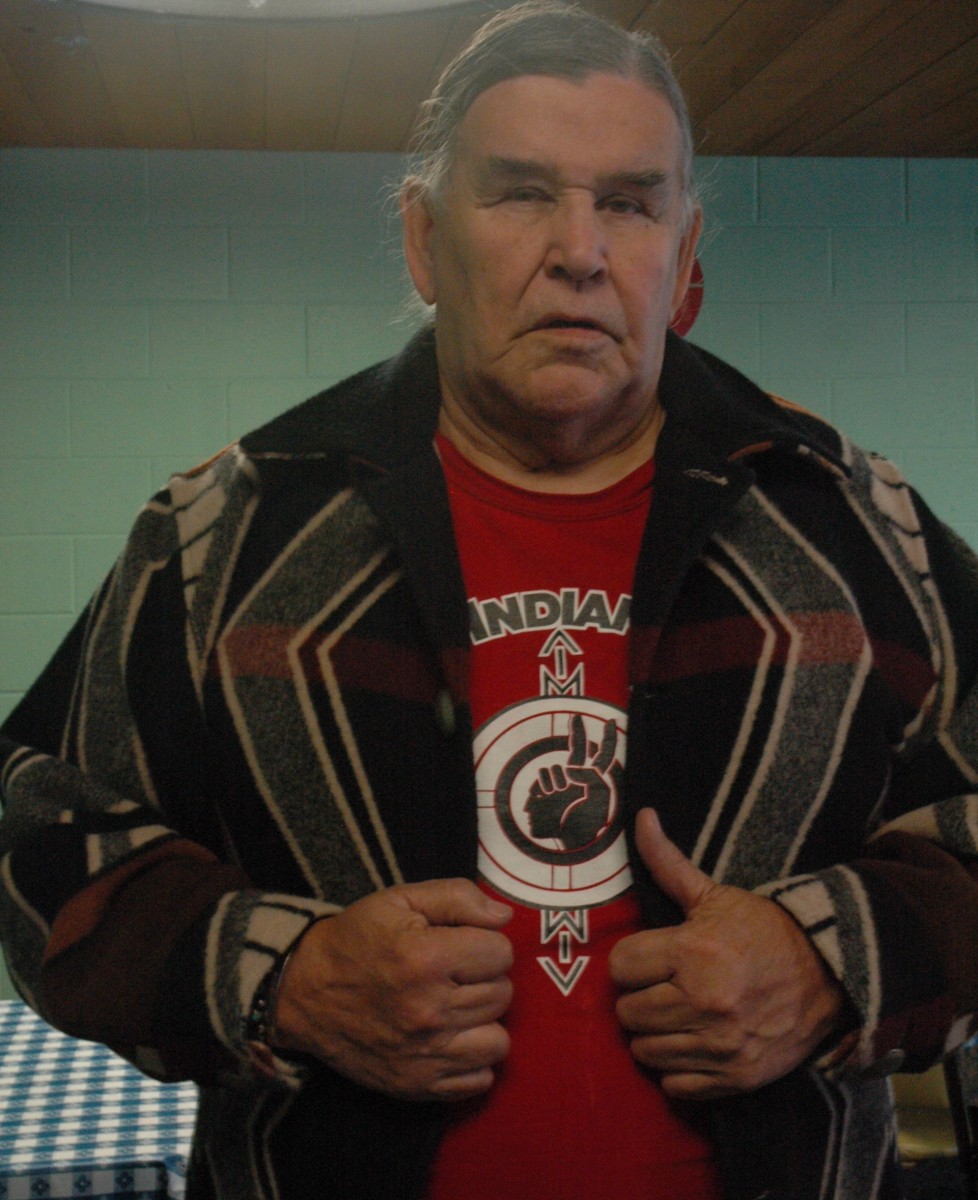 Clyde Bellecourt, the Executive Director of AIMIC, was born on the White Earth reservation, and as a boy attended public school before being transferred to mission school.* “They worked day in and day out with the relocation to strip us from our language, our culture,” he said.

Many of Bellecourt’s family members were relocated to Minneapolis under the Indian Relocation Act. Sixty percent of American Indians moved off the reservations into urban areas, according to Bellecourt. “They show you a nice picture, get you training at a college, say ‘we’ll give you two months rent,’” Bellecourt said. As for Bellecourt, he was relocated to Minneapolis when he was on parole, and wasn’t allowed to go back home to the reservation.*

In 1968, Bellecourt was one of the founders of the American Indian Movement, which started as an outcry against injustices against American Indian people in areas such as as poverty, health, education, unemployment, racism, and the highest suicide rate of any race, according to Bellecourt. AIM leaders fought against these injustices as well as for treaty rights and tribal land.

When the American Indian Movement formed, Bellecourt said, “Everybody laughed at us.” Nonetheless he and others decided to stand up together. Bellecourt said that they put together a 20-point position paper, every one of which has been enacted today.

In 1972, Heart of the Earth Survival School, which was incorporated in 1968, won Congressional recognition, according to the AIMIC website, and in 1974 the school received federal tax exempt status as the American Indian Survival School. The school was opened as a way of reclaiming the heritage of their children. “If we forget our past, we will never have a future,” Bellecourt said. AIM members felt their culture had been greatly wronged by the boarding schools where natives had been forced to go to for generations, and wanted instead to form their own institutions where native traditions and ways of life could be taught. According to Bellecourt, who ran the school for 33 years, Heart of the Earth graduated more American Indian students than public schools.

Under the Reagan administration, federal funding to the school was cut, forcing it to close. It re-opened as a charter school in 1999, and stayed open until 2008 when a scandal involving the executive director embezzling millions of dollars forced the school to close.

Bellecourt is still passionate about preserving American Indian traditions, and reclaiming the history of his people. “That’s why we are building an archive,” Bellcourt said.

Bellecourt said the interpretive center will not be a museum. “Museums are where they keep our skulls locked in vaults,” he said. “Our group is making live history by telling the truth. It’s an interpretive center. If they use the word museum, we’ll fine them $100. That’s the truth.”

Part of the archives will include the Bancroft collection, from the photographs of Dick Bancroft, taken over 40 years.

Bancroft got involved with AIM when he was working with the United Way. The American Indian Movement in Minneapolis and Saint Paul had both requested funding, and he was on a committee to study the request. Bancroft interviewed many of the founders of AIM, such as Pat Bellanger and Dennis Banks, and in the process of those interviews, was made very conscious of what AIM was about. “It was intriguing and compelling and the people were terrific,” he said.

After AIM received funding from United Way, he asked Bellanger what he could do to help. She asked him “What do you do?” and he replied that he takes pictures, so that’s what he did. The photographs were used for various publications, and also for slideshows that were used for events.

“The whole movement exploded all over the country and Latin America,” he said. “In those times, we had just experienced the civil rights explosion and the anti-war movement for Vietnam and the assassination of Martin Luther King and Bobby Kennedy. It was a very volatile time… this was the first cross-tribal group advocating for change.”

Bancroft’s photos include all kinds of events from the movement’s beginnings up until today.

In addition to his photographs, he also has collected poster art of pow wows, which are currently hanging in his garage.

“What happens is, people die,” he said. “My wife is fed up with the stuff I got here in the house. She’s very excited to move this stuff to the mansion and getting someone who’s competent to catalogue it… you end up with boxes of this stuff. I’m not a particularly good file clerk. Stuff I shot 10 years ago — I have a hard time finding it.” Some of his photographs will go to the Interpretive Center, and some will go to the Historical Society, he said.

The two architects for the Frey House renovation are Karen Gjerstad and Robert Roscoe, who have been working on the project, with starts and stops, for two years. Originally, they were planning to make the building mostly administrative with classroom space and some exhibit space, but Roscoe said that Heart of the Earth discovered they could rent administrative space a block away, which left more space for the gallery.

According to Gjerstad, they wanted to keep the integrity of the historic building, built in the Romanesque Revival style, while housing the history of the American Indian Movement. “It has a past history and a future history,” she said.

The building, originally the Henry B. Frey House, was built in 1892, and designed by Warren Hayes, who also designed Wesley Methodist Church downtown. According to the architects, the structure is very much intact. The woodwork has been painted, but it may be that it had been painted originally.

Ironically, Henry B. Frey was a prominent lumber businessman in Minneapolis. His partner was B.F. Nelson, and, according to Roscoe, wood that was bought for the home was purchased from T.B. Walker (founder of The Walker Art Center), who was taking wood from the White Earth Indian reservation.

The architects said they are paying attention to keeping the interior integrity, with the most challenging element being making sure that the temperature is right for the archival materials. The different objects, from fabric to paper, to photos, all will require different maintenance, they said.

Romanesque architecture is usually made with stone, Gjerstad said. The Frey house has a quarry base, arched windows, and steep thick walls. “There’s a sense of presence and massiveness,” she said.

One piece of the building that will need rehabilitation is the front porch. “That has been settling for some time,” said Roscoe, and will need to be stabilized. “That’s going to be tricky. The stones are laid out in random patterns. We’ll have to mark each stone, and photograph it.”

The building’s renovations will include a new elevator and new bathrooms. The exterior will maintain its original character, though some of the joints will have to be repaired. The interior has yet to be designed, with the new design to be dictated by the organization’s needs. The first floor will main basically intact, according to Roscoe, but the second floor will need some change.The house has two main floors, with a basement and an attic. The basement will be used as a library. Plans call for the building to be rented out for events, as it has a beautiful dining room.

Currently, the American Indian Movement Interpretive Center is seeking funding at the state and federal levels to make the renovation happen. In addition, they are in the process of preparing the collections, meeting with various departments at the University of Minnesota and taking steps toward becoming a accredited under the international standards of the American Association of Museums, according to their website.

CORRECTION 1/31/2012: Due to an error in transcribing notes, the original story contained a mis-quotation from Clyde Bellecourt, which has been removed. We extend our apologies to Mr. Bellecourt.