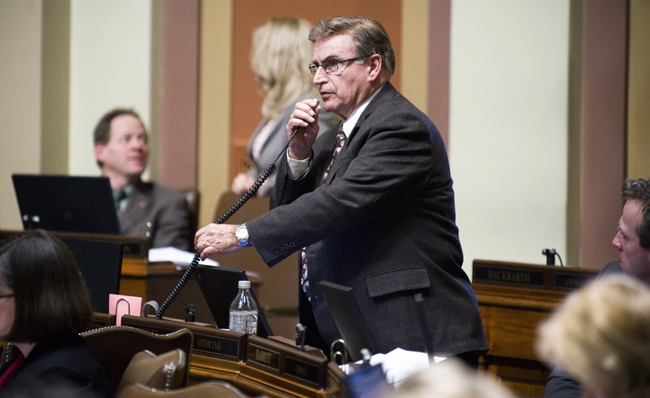 Tuition would go up, funding levels would drop to levels not seen in more than a decade and top officials’ salaries could go down.

These are among the potential results of the omnibus higher education finance bill passed 69-60 by the House March 29.

Sponsored by Rep. Bud Nornes (R-Fergus Falls), HF1101 now goes to the Senate. Its omnibus bill, SF924, sponsored by Senate President Michelle Fischbach (R-Paynesville), was passed 36-27 March 29 and tabled. A conference committee is expected to work out the differences.

“Under the circumstances, this is the best we could do,” Nornes said.

The bill would decrease higher education funding by $411 million, or a 14.1 percent base reduction. The total is 10.9 percent lower than the 2010-2011 total forecast. Gov. Mark Dayton‘s budget calls for a $170.9 million cut to higher education. Funding levels would reach late-1990s levels.

Nornes said protections would be put in place so students do not bear the brunt of the money woes: the bill would fully fund the state grant program, and there would be no reduction to the work-study program or to post-secondary child-care grants.

“Gov. Dayton did not fully fund the state grant program in his budget,” Nornes said. “He also had some reduction to the state work-study program and the post-secondary child care grants; 35 percent cut to work study and child care 5 percent.”

Further, the bill would set a maximum annual tuition cap of 4 percent for state university students and 2 percent for state college students in the Minnesota State Colleges and Universities system. Because of the University of Minnesota’s autonomy, a cap cannot be placed on its tuition increases. However, the expectation is that it will not exceed 5 percent either year.

“Our goal of this bill was to ensure students didn’t bear the brunt of these reductions by having increased tuition that was unreasonable,” Nornes said.

Systems are expected to make up about a third of the state appropriation reduction by increasing tuition. They will also need to reduce spending and reform to live within their means, Nornes said.

“Maybe this bill will send the right message to the higher ed institutions that they need to start controlling their costs,” said Rep. Linda Runbeck (R-Circle Pines). “It’s becoming unaffordable.”

The first would limit future salary of the chancellor to that of the governor, and would prohibit bonus payments. Pelowski said Chancellor James McCormick’s salary was $360,000 this past year and he received a $40,000 bonus. “To give a bonus for the leader of an educational system that has had record increases in tuition, record increases in debt and record cuts is repellent.”

The other amendment would require a MnSCU internal evaluation of ways to evaluate efficiencies and effectiveness of delivering a postsecondary education. “It must recommend methods to refocus administration at the campus level and reduce or eliminate duplicative administration through central services.”

Rep. Steve Drazkowski (R-Mazeppa) unsuccessfully sought to encourage the university’s Board of Regents to lower the president’s salary by $250,000 per year. The Legislature can only recommend the university do certain things.

Rep. King Banaian (R-St. Cloud) successfully amended the bill to prohibit the use of state or federal funds to support human cloning. “This is simply concerned with the funding of research into this. It is not an outright ban. … It does not ban a state institution doing it if it was able to find private funding to do so.”

A number of DFLers, including Rep. Tim Mahoney (DFL-St. Paul) and Rep. Tina Liebling (DFL-Rochester), fear the amendment would force companies to leave for other states because research being done today would be prohibited.