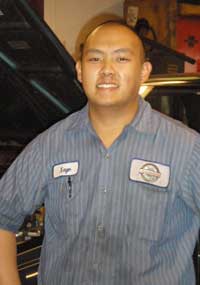 Xaye Thao-Pha, 22, is an auto mechanic. The website iseek.org estimates mechanics in Minnesota earn about $18 an hour.

When Xaye Thao-Pha started changing oil as an intern for Alexander’s Imports in Minneapolis when he was 18, he was already pretty certain about his future career.

He was good with his hands and he liked working on cars. “I use my hands for everything,” he said. As a senior at Roosevelt High School in Minneapolis, he started excelling in his auto mechanics classes in his senior year.

But he hadn’t done the extra, after-school work that would have made it possible to pass the rigorous tests and earn the college credits and certification from the National Automotive Technicians Education Foundation. Certification would have given him more job options and a higher wage.

“You come out of high school certified, people are going to want to hire you,” he said.

Thao-Pha, now 22, married and a father, has become a mechanic the old-fashioned way – learning on the job and passing tests offered by the Institute for Automotive Service Excellence to become certified in different skills.

“I learned the majority of things on my own … My boss, he teaches me whatever I don’t know,” he said. Thao-Pha didn’t want to say how much he earns, but iseek.org, a website run by Minnesota state agencies that helps job-seekers research different careers, estimates that auto mechanics in Minnesota are paid about $18 an hour.

For young people today, it’s harder than ever to find good paying jobs that don’t require some training after high school.

“There are a lot of high-tech, high-wage, high-demand jobs where you don’t need to get a four-year degree, but you will need training after high school,” said Wendie Palazzo, director of career and technical education for Minneapolis Public Schools.

Consider nursing, for example. Demand is high for both registered nurses and nursing assistants, according to iseek.org. But RNs need at least a two-year degree and earn $34.07 an hour while nursing aides, who receive short-term on the job training, earn just $11.54 an hour.

Apprenticeships are available in fields like construction, Palazzo said. But even those require some classroom training.

Palazzo is responsible for making sure that the career education offered in Minneapolis high schools prepares them for today’s job market and for community college programs where they can finish their training. A student who completes the cosmetology program at Edison High School will have 11 credits toward a cosmetology license, for example. And the aviation program at Washburn High School was eliminated, because airline mergers mean fewer jobs and more maintenance done overseas, she said.

Thao-Pha thinks that’s a good idea. “When I was there, there were a lot of students who came in to sit around.”

Palazzo worries that many students give up on school because the emphasis on passing standardized tests means less lab work and experiential learning.

“Some people are tired of high school by the time they’re finished and the linear method that’s used. Now there’s much less lab work and experiential learning than many adults remember because of all the testing problems … We’re doing a ton of remediation at the expense of some of these applied classes.”

“If we can get them over into some of these other schools, they’re going to see that they’re pretty smart,” she continued. “They’re being taught in a way that makes sense to them … What they’re doing matters.”

With an infant son and a wife in college, Thao-Pha doesn’t have time for a two-year automotive technical course offered at schools like Hennepin Technical College and Dakota County Technical College.

That doesn’t mean he’s not learning. “The education never stops here … You have to keep up with changing technology.”

But for other young people, Thao-Pha advises: “Stay in school … If you don’t know what you want to do, go to college. You’ll find out there.”