Senior Bao Khang talks about her interest in video production Thursday, December 5 at Patrick Henry High School in north Minneapolis. Khang will rely on scholarships and grants to pay her college tuition. (Photo by Joe Michaud-Scorza)

Before school, Bao Khang and her three younger siblings often tussle over who’s using the upstairs bathroom. But it’s not as bad as it was before, when her three older sisters and two older brothers shared it, too.

Her big family has lived in their north Minneapolis house for as long as she can remember. Her parents landed in Minneapolis after arriving in America in 1988 from a refugee camp in Thailand.

Bao must balance her family traditions with American culture. On some nights she chats in Hmong with her mother while preparing a big dinner and on others she spends hours reviewing her physics homework.

At Patrick Henry High School, a place Bao said she loves and calls her second home, she has assumed responsibilities ranging from the student council’s public relations officer to shooting video for the school’s robotics team. She also manages the wrestling squad and is editor in chief of the yearbook.

Like other students from humble backgrounds at Patrick Henry, Bao must fight for the grants and scholarships she needs to pay for college.

“There are those students who have constantly been told that this is the end of the line for them and [that] after high school they’re not going to do anything, and … that’s their mindset,” said Quinton Bonds, the Career and College Center coordinator at the school. “And then there are students that have been told that very same thing who are saying, ‘Well, I’m going to prove you wrong.’”

In a home where unity is paramount, Bao is eager to break away — a little. She wants to find a university that’s close enough to stay connected with her family but far enough to feel like she’s on her own.

“I want to be able to experience college life and be that lonely girl who cries because she misses her family,” Bao said. “I think that if that happens, it just truly means that I’m independent.” 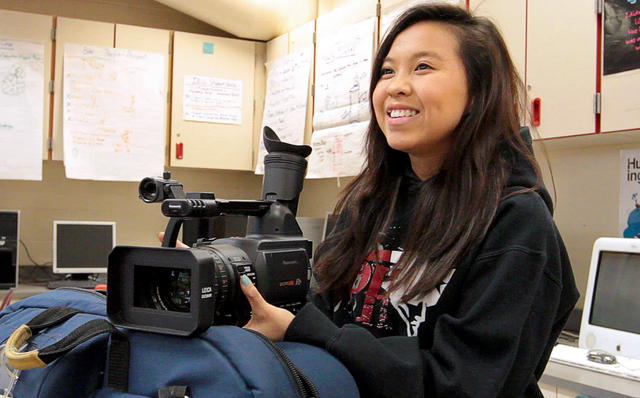 Senior Bao Khang talks about her interest in video production Thursday, December 5 at Patrick Henry High School in north Minneapolis. Khang will rely on scholarships and grants to pay her college tuition. (Photo by Joe Michaud-Scorza)

In the bleachers of the main gym at Patrick Henry High School, overlooking the red and black wrestling mats, shouts of encouragement rang out in Hmong, English and Spanish.

Some Patrick Henry students are working to be the first generation in their family to pursue a college degree, and their parents can’t help. In Bao’s case, there is a language barrier. In other cases the parents haven’t learned the process or are busy working.

“We find that a lot of our parents are working multiple jobs to support their families,” said Bonds. “They may be so busy that they can’t make it to [informational meetings], or they’re sleeping getting ready for their next job.”

Patrick Henry has programs that link students with scholarships, summer jobs, tours of local colleges and help with the application process. This is where Bao went for help for everything from résumé building to the admission fee waivers she sent with her eight application letters.

Following her older sisters’ lead, Bao has applied for various grants and scholarships and is eagerly awaiting the results.

Five of the eight schools she’s looking at are private and much more expensive. But for Bao, it’s worth it for a smaller school.

“Although it might cost more, I want an environment where I wouldn’t get lost in the crowd.”

On a Sunday afternoon, Bao’s grandma, aunt, uncle and mother sat silently around the television, watching film of a Laotian farmer working in a field.

To many it would seem uninteresting — hours of simple manual labor with a constant commentary in Hmong.

But for Bao’s family, it was a way to connect to their homeland — a way to remember.

One of nine children, Bao must work around the house as much as she studies. She cleans, cooks, helps her parents translate the bills and is a role model for her younger siblings.

So for her, the college decision is emotional.

She’s been accepted to the College of Saint Benedict and Gustavus Adolphus College, both an hour and 20 minutes away — one to the northwest and one to the south.

But she’s still waiting for news from five schools, including the University of Minnesota.

On Saturday, instead of an acceptance letter, Bao had to open and translate a letter to her father saying the family house was being foreclosed.

At the end of her junior year, Bao’s father lost his job as an assembly worker, a position he had held for 10 years. At the same time, three of her older siblings moved out, leaving Bao — who was accustomed to being one of the youngest children — the oldest in the house.

The new responsibility taxed her. Her grades dropped. She spent more time at home.

And now, after working her way back up, she must decide where to go, and she can’t help but keep the welfare of her family in mind.

“In the Hmong culture, family is really valuable. I guess it’s hard for the parents to see their daughters and sons just move away.”

College Bound is a series about the varied backgrounds of high school seniors around state who have the University of Minnesota in their plans.

Joe Michaud-Scorza contributed to this report