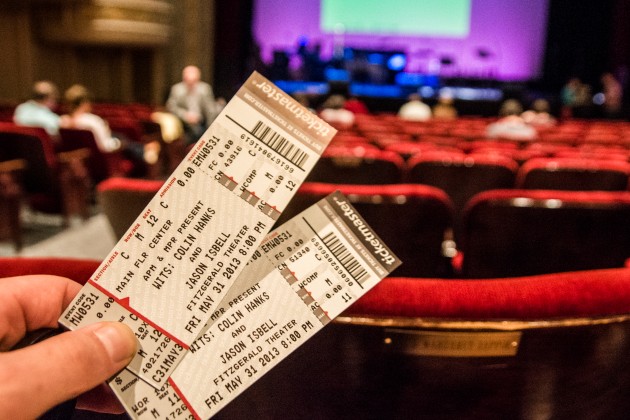 There’s something so insider about watching a live radio show! I knew it when my parents took me to the World Theater to see Garrison Keillor as a kid—I knew it last night at the same theater (new name) watching Wits at the Fitz. You feel like you’re in the middle of a big secret—knowing what the people on the radio look like and their gestures, seeing what’s scripted and what isn’t, and witnessing actual heckling! On May 31, Wits offered all that and more.

John Moe hosted an evening with Colin Hanks and Jason Isbell with a special appearance by Har Mar Superstar. We learned about Where’s Waldo as a drug mule, how decaf is like kissing your cousin (and I have to agree with Jason Isbell—haven’t done either!), how keeping people occupied keeps them from being grumpy, and we know to call professional friend Doug Bagelson if we need a pal.

Colin Hanks sold us his love of hockey, which as a kid he apparently broadcast to the world through a mullet. He was great through a series of scripted bits—especially as Doug Bagelson, but as is often the case when I listen to Wits at home, it’s the unscripted question/answer or contest portion of the show that I enjoyed most. He was great answering stupid questions about his dad, Tom Hanks. It was fun to see how much he appeared to enjoy doing the show.

Musical guest Jason Isbell is from Muscle Shoals, a area of Alabama well known for musical influence. Apparently there were two places to produce records in Muscle Shoals back in the day. The Rolling Stones were known to frequent one of them. Isbell is country—although his rock-and-roll leanings shone as he joined John Munson for “Freebird” and played “Wild Horses” for the audience sing-along. He began the night with “Live Oak”—from his forthcoming album—and ended with a fan favorite, “Outfit.” (“Outfit” was actually a bonus song for the live audience, which again just adds to the fun.) Isbell is a storyteller, which brings an unreliable authenticity to his songs, and I mean that in a good way. It also gave him a jump on the contest where he and Hanks had to portray the softer side of hated characters through history, such as the voice of Barney the Dinosaur.

I won’t spoil the show by telling you who won the big contest, because the show will be broadcast Saturday, June 8 at 8:00 PM on MPR and Sunday, June 9 at 9:00 PM on The Current and available on the Wits website after Sunday. I will say that John Moe’s scoring seemed even more capricious than usual!