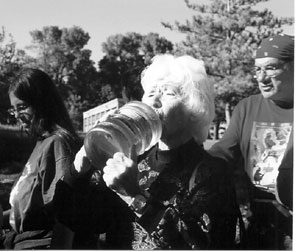 “We send our prayers to heal and restore the Earth, and
that Coldwater Springs stays wild, clean and untamed forever.”

In blazing sunshine that made you squint, Sunday’s 7-degree temperature was not a problem for this year’s Winter Solstice gathering of 75-100 people. For returning Hwy 55 Encampment-ers, it was nostalgic. Getting water. Doing ceremony. The cold and the fire ring, the ring of people around the fire, talking. Sky . . . earth . . .water . . . heart. . . community.

“We send our prayers to heal and restore the Earth, and that Coldwater Springs stays wild, clean and untamed for-ever.”

The ritual was the effort of three groups, Earthtones (reviewed as “fun music, not in English”); Twin Cities Reclaiming Community (the roses, the prayer, the labyrinth); and Friends of Coldwater—boasting the youngest working friend of Coldwater, the Bridge Troll. Eli is 2-years, 3-months old and this was his second Winter Solstice at Coldwater. Last year it was all about ducks. This year the Bridge Troll, and his Da, Hello-ed and smiled at every person who circled Coldwater reservoir. “Water,” he told his Da. Then “park” and “water.”

Yes Eli, Coldwater should be parkland with a sacred sensibility. Not only is Coldwater the last spring of size in the Twin Cities, it is the last spring since the Great Medicine Spring (Wirth Park) and Glenwood Spring were permanently dewatered by I-394 construction in the 1980s.

Hydrologists say that 10,000 years ago Coldwater was running beneath the last glacier. Next year, the “disposition” of “the former Bureau of Mines” will be decided in the final step of the two-year federal process to determine the future of the 27-acre Mississippi bluff top Coldwater campus.

The powers-that-be in the National Park Service planned to sell Coldwater to the Twin Cities airport for $6 million to use for parking, including a multi-story parking garage which would have been inserted into the bedrock—some of which carries groundwater to the spring. After 9/11 with the airline economic crash, the sale was called off.

“We send our prayers to heal and restore the Earth, and that Coldwater Springs stays wild, clean and untamed for-ever.” The 2005 solstice ritual was all about water.

Since Katrina, adequate, clean drinking water has made news in America (as it does in the rest of the world). Will we go from petroleum wars to water wars? The United Nations calls water a human right. Coldwater is the last spring.

Thirty-eight people signed up to be notified when the Final Environmental Impact Statement (FEIS) comments are called for during the first quarter of 2006. At year’s end the future of Coldwater should be announced. Let’s hope we have good news at next year’s Winter Solstice celebration on Sunday, December 17, 2006.