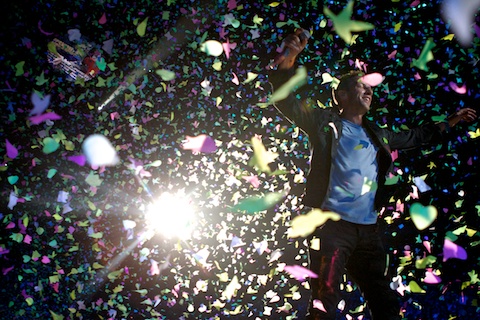 Coldplay has, for many people my age, developed a reputation for being the musical equivalent of a wine cooler. Now included in “adult contemporary” and “easy listening” radio, the angst-ridden appeal the band had in the early 2000s has morphed into something strangely suburban that is, quite honestly, a little too easy to swallow. Seeing Coldplay at the Xcel Energy Center, however, I was stunned by the group’s individual and collective charisma, as well as their energetic performance.

The Twin Cities were the last stop on the American leg of Coldplay’s Mylo Xyloto tour, and frontman Chris Martin assured the crowd they had all decided it would be the “best fucking show [they’d] ever played.” Their performance was certainly a spectacle, complete with oversized balloons, inflatable butterflies, and light-up bracelets for audience members. Martin and company covered twelve years and five albums of music, crossing time and emotional space from more heart wrenching content (“Yellow,” “Fix You”) to spirited sing-alongs (“In My Place,” “Every Teardrop is a Waterfall”). And sing along they did. A sign of the group’s mass appeal, the audience was comprised of middle-aged parents, pre-teens, drunk fraternity brothers, and a number of 20 and 30somethings with a somewhat distant look about them that suggested they had been prime targets for Parachutes and A Rush of Blood to the Head in the early 2000s. Shoot confetti out of a canon, though, ask people to sing along, and somehow these differences (along with a general lack of audience rhythm) matter much less.

This unifying energy and sustained momentum were the most shocking aspects of the night for me. While I like Coldplay, I had never seen them in concert, and had a hard time imagining Martin jumping off a three-legged stool after “The Scientist” to belt “Princess of China” with a pre-recorded Rhianna track. Similarly, when Martin married Gwyneth Paltrow in 2003 there was some speculation about whether the trademark unhappiness of the band would suffer. What would Coldplay be if not melancholy? This show was a perfect answer to both my lack of imagination and any lingering skepticism about Coldplay’s emotional prowess. The group not only navigated the space between joy and self-reflection well, they thrived in it. Mixing tempos, creating bridges, and melding the show into one continuous ride with Martin as guide somehow made the lows more poignant and the highs more elated. While I don’t believe Coldplay’s growth or influence as a band can yet be considered equal to their oft-mentioned idols, U2, their first album and tour of this decade showed them to be older, wiser, and more adept than the young men we met in 2000.