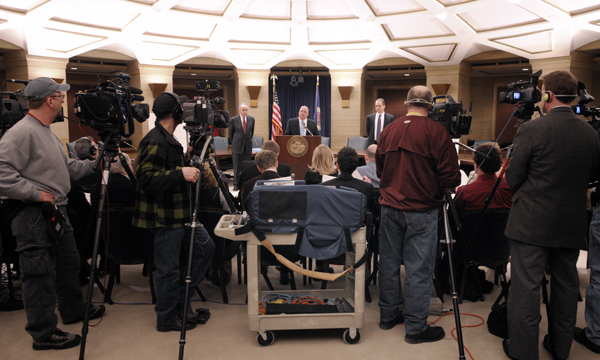 Depending on whom you ask, the state’s February economic forecast is either good news, bad news or no news.

One thing is certain: the nearly $1 billion deficit it predicts merely scratches the surface of the state’s fiscal problems.

Released March 2 by Minnesota Management & Budget, the February 2010 Economic Forecast predicts a $994 million deficit for the current biennium. As large as it is, it represents a $209 million improvement over the state’s last economic forecast in November.


MMB Commissioner Tom Hanson called it “good news,” and said the forecast proves the so-called Great Recession is at an end.

“I think this is continued evidence that our economy has bottomed out, and we are in the long, slow road to recovery,” Hanson said.

But the forecast also projects a $5.8 billion deficit in the next biennium, which is $363 million worse than November’s prediction. Moreover, Hanson said the smaller short-term deficit is due mostly to spending reductions and help from the federal government – not to an improving economy.

State Economist Tom Stinson said the February forecast shows no real change from November. He said the real measure of economic recovery will be how quickly the state’s employment numbers grow.

“Even under the optimistic scenario, it’s going to take until mid-2012 for employment to reach its prior (pre-recession) levels,” Stinson said. “This forecast once again shows us that we have a very long-term problem in this state,” said House Speaker Margaret Anderson Kelliher (DFL-Mpls).

Depending on how it’s calculated, the $5.8 billion budget gap lawmakers face could actually be more like $8.5 billion – a figure that includes inflation, as well as the cost of restoring programs eliminated last year by Gov. Tim Pawlenty.

In all, between 15 percent and 20 percent of the state budget may be in jeopardy when the Legislature convenes next year. Kelliher blames much of that shortfall on Pawlenty, arguing that his budget policies, which have included the use of accounting shifts and other one-time solutions, have pushed the state’s financial problems off into the future.

“It’s a continued story of his governorship,” Kelliher said. “His legacy is a legacy of ‘kick the can down the road and ignore the underlying problems the state faces.'”

The governor’s supplemental budget plan would solve the current $994 million biennial deficit through budget cuts and by using federal aid. It would leave at least a $2.8 billion budget hole in the 2012-13 biennium. DFLers argue that a more “balanced approach” – that is, one that includes some tax increases – is more realistic, and would help reduce future deficits.

Meanwhile, responding to Kelliher’s comments during a press conference, Pawlenty defended his record on the budget. He said his budget plan would make the 2012-13 deficit “manageable,” and argued that he has had to govern during “challenging times.” Moreover, he said the real problem is out-of-control state spending.

“Most of the deficit in the upcoming biennium isn’t anything other than double-digit spending increases at a time when the revenues aren’t going to grow that fast,” Pawlenty said.

That sentiment was echoed by Republican leaders, who argued a revenue shortfall is not the issue. House Minority Leader Kurt Zellers (R-Maple Grove) said many state programs are on “autopilot,” set to increase automatically at unsustainable rates. “We have a spending problem, not a revenue problem,” Zellers said, adding that government “should do like a lot of families across the state of Minnesota” and learn to live within its means.

Lawmakers and the governor have until May 17 to reach agreement on a budget solution. Senate Majority Leader Larry Pogemiller (DFL-Mpls) said legislative leaders plan to push their own budget proposals in a series of installments. He said the first would likely contain cuts to state agencies that will match cuts proposed by Pawlenty. The second bill would focus on health and human services funding, while the third would cover local government aid and K-12 education funding.

“We are doing this in pieces, but they are complete pieces for those budget areas,” Pogemiller said, adding that some of the pieces may include options to raise new revenues.

For his part, Pawlenty said he would accept DFLers’ plan to pass the budget in sections; however, he argued that doing so was merely a way for the DFL to push off “the hard stuff” until the end of session.

“We’ll take budget cuts any way they want to deliver them up,” Pawlenty said. “I just hope that they actually get to the third installment, or even the second installment.”