In the world of literature, there is inevitably always something new happening. The newest new in Minneapolis is a project called Cloud City Press, co-founded by Macalester students Oliver St. John and Luke Marcott, and run with the help of a small (mostly Macalester) staff along with three faculty advisors. Though Cloud City only came into being about five weeks ago, its first chapbook will launch into this word-friendly world of ours on Friday, April 13 at the new Common Good Books, which is now located adjacent to Macalester’s campus.

Over Easter weekend, I met with St. John and Marcott at Cahoots Café on Selby Ave. in St. Paul to talk a little about their project, and how Cloud City (yes, that’s a Star Wars reference, and the name of the apartment where both St. Oliver and Marcott live) can help flesh out the already fertile landscape of the Twin Cities literary scene. The two seniors expressed a not uncommon dissatisfaction with the general atmosphere of most academic literary outlets, noting that generally, they “suck.”

“There’s this preconception if you’re an editor of a literary magazine this is the kind of stuff that goes into literary magazines and then you publish stuff that looks like that stuff and it’s all the same and you can’t take any real risks,” Marcott said. “We got really sick of this incredibly sterile writing environment that’s in and around Mac and so we decided to make our own thing.”

If they’re not publishing the typical stodgy work that often appears in the pages of university literary journal, then what are they publishing? We’ll all have to wait until Friday to really find out, but Cloud City’s mission statement packs a punch by promising to “publish writing that don’t give a fuck what you think about it.” Their first chapbook, Filmpocalypse, written by Marcott, is about working in a video store (loosely based on Franklin’s Filmzilla) during the 2000s, when everyone on staff knows that every day they’re open is a “slow march toward the death” of the store, but no one talks about it. Rather, the storeowners just subsidize sales with “B list porn” sales.

Modeled after One Story’s single-work, single-author pamphlet, Cloud City is looking to publish 60-80 page stories, a length much longer than typically found in school journals. The reason behind this, St. John explained, is that any student taking serious creative writing classes is going to end up working on a long project over the course of a semester or two, and it’s almost impossible to find a home for those longer works once completed. So Cloud City will be that home for some. However, who knows where the editors will take the project? Though Macalester is home to most of the staff, they are in no way funding any aspect of Cloud City, so St. John and company are free to do whatever the hell they please (which is really a pretty sweet deal). 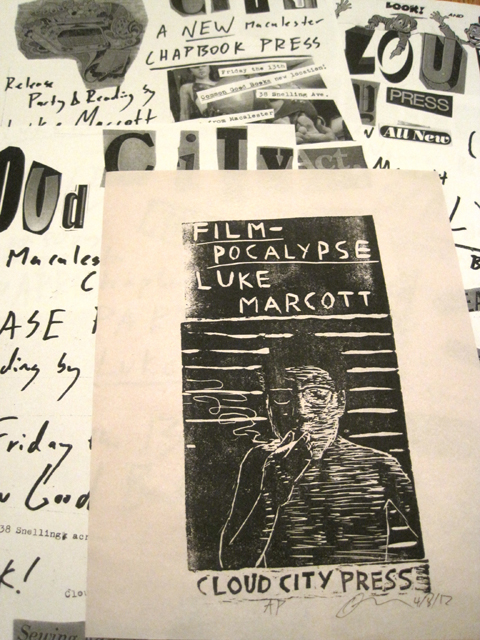 Supremely DIY, Cloud City staff look to three faculty advisors for advice and practical guidance—Peter Bognanni, James Cihlar, and Wang Ping, who first approached St. John and Marcott with the idea to start a chapbook press. “Oliver and Luke have been studying with me for several years,” Ping said. “I watched them grow and flower as writers, and would like them to have some fruit upon their graduation.”

Whether St. John and Marcott see the project as “fruit” is unclear. Marcott noted that he does not quite believe that an undertaking like this could be a résumé booster, and worries that a history of only small business experience will lead prospective employers to the understanding that he does not like authority figures, which (like most creative undergrads) he confirmed is, in fact, the case. St. John chimed in with the familiar writer’s goal of a strong desire to be famous. “That’s kind of always the end goal,” Marcott responded, laughing.

Regardless of where they end up, at least in terms of their work with Cloud City, Ping believes that this kind of experience is important: “It’s the climax of much training, labor, pain, and joy. When they hold the book in their hands, they’ll know what it means to labor for love and passion.”