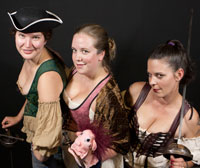 If you’re feeling a little Fringe withdrawal as summer fades behind us, and applications for the next Minnesota Fringe Festival go-round are still several weeks away, might I suggest some lusty female pirate action?

One of this year’s encore winners as the most well-attended show in its venue, Yarrrh! – The Lusty Busty Pirate Musical has been giving the fabled ship The Golden Rack one last trip on the high seas before taking her into dry-dock for a while.  They’re currently running at Open Eye Figure Theatre (506 East 24th Street in Minneapolis) – tonight (Friday) and tomorrow (Saturday) (9/23, 9/24).  Friday’s show is at 7:30pm.  Saturday has two shows 7:30pm and 10pm.  And then the lusty, busty ladies are done with their pirate gear for a while.  (And if you wear a pirate costume to the 10pm Saturday show, you’re eligible for fabulous prizes – it says so on the internet, so it must be true).

I saw the first outing of YARRH! with Mom at the Fringe, but wasn’t able to crank out a review in time before it closed.  Two of the three talented ladies in that production are back again – Lisa Bol and Ariel Pinkerton Leaf.  Their third compatriot this time around is Valerie Rigsbee.  And of course, there’s the accordion accompaniment of Noah Strom.  And the puppet, Toby Bustle (and can you believe it took me this long to figure out why they listed the actor as Oliver Hands?  All of our hands.  For a show full of word trickery of a naughtier kinds, you think I’d pick up on all the puns.)

YARRH! has been described as an all female Irma Vep, but it’s got a little more going on than that.  It’s not just about all of Andrea Gross’ rapid-fire costume changes for the ladies.  Sure, the actresses play across gender and mimic heterosexual romantic couplings.  And yes, there are a multitude of double, triple and quadruple entendres in Daniel Pinkerton’s book and lyrics on swords, beavers and racks (among many other handy euphemisms).  In this play, to bastardize Freud, a cigar is never just a cigar.  But underneath all of composer Chris Gennaula’s jaunty pirate anthems, and Pinkerton’s mischievous wordplay, there’s some almost subversive sexual politics playing out.  After all, the hero ends up being less the stalwart Jake O’Reilly (Bol) and more the Pirate Queen Desiree La Femme (Leaf).  And bar wench/hotel proprietor Rosie Bustle (Rigsbee) ends up not with the man of her dreams, but the woman of her dreams.  She captures the heart of the Pirate Queen, they get a naughty love duet, and sail off into the sunset together.  And because of all the gender-bending costume and character changes, the production conditions us to accept this is perfectly normal, where it another production a lesbian couple might stick out like a sore thumb.  It’s precisely because the show doesn’t make a big deal over who ends up with whom, and it’s such playful fun, that it flies in the face of all the political posturing going on these days.  Adventure is just adventure, heroes are just heroes, and love is just love, no matter what clothes it’s wearing.

(Fair warning – It’s not a family musical.  It’s filthy.  But its heart is in the right place, all the while it’s entertaining you in a thoroughly naughty fashion.  Adults should get to have some silly fun, too, now and again.)

If you haven’t boarded the Golden Rack, it’s a fun way kick off your weekend.

More information can be found at openeyetheatre.org