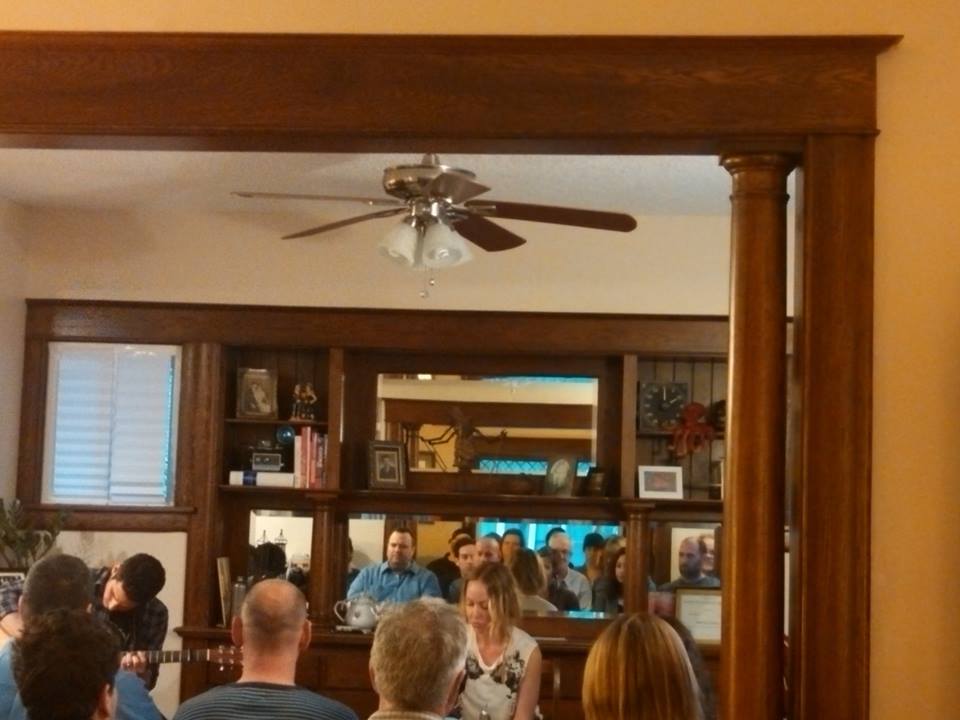 Cake In 15 hosts living room concerts with local bands. The audiences are small—think 20 people—so the shows are inherently intimate. Batteryboy play music that sometimes feels like a peek in someone’s diary. After batterboy’s Cake In 15 show on June 1, I felt (pleasantly) emotionally drained!

Batteryboy play pretty music. The melody of the sad songs, even without the lyrics, opens your heart. The reserved upbeat tempo of the joyous songs makes you smile wistfully. The harmony of the singers, the blending of violin…it’s just beautiful, grown up music.

The band includes three members: founding member Cobey Rouse, vocalist/violinist Shannon Frid (from Cloud Cult), and keyboardist/guitarist Eric Carranza. Part of the fun of seeing them in such an intimate setting is getting a glimpse of what the band members are like in their own skin. Rouse noted a few times that he’d be more comfortable being less acoustic: “I never sing unless I can soak that shit in reverb.” Which was interesting to me because I thought the clarity of his voice, especially when coupled with Frid’s, brought the songs to life.

The other part of the fun is learning the stories behind the songs. One song that touched me was “Just Enough,” which will be on batteryboy’s upcoming release. The song is about grabbing the last strings of dwindling love; Frid’s voice is haunting and heartbreaking now that I know the back story. Then there was the song written by Rouse while his eight-year-old twins were looking for shooting stars. He commented that “this was time spent with Dad,” which is comforting if you happen to be a parent who also works near kids as they play in an attempt to appear to be parenting when at best you’re multitasking.

Batteryboy’s new album, Up for Air, will be released on June 18. The CD release party will be on June 22 at Icehouse. While it may not be as intimate as a living room gig, the performance could easily be an emotional workout.