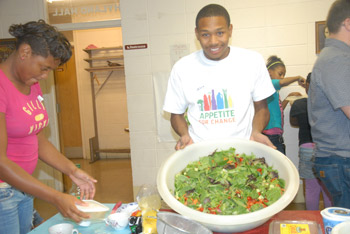 “It’s called Cleveland Connects because the idea is to connect neighbors with one another,” said Ariah Fine, head of the Cleveland Neighborhood Association.

And the connection is all about healthy eating. 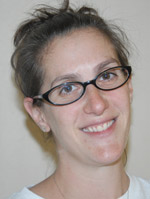 “We do this by bringing families together to cook, eat and talk,” said Michelle Horovitz, executive director for Appetite for Change (left). “We have a lot of families here cooking fresh, homemade, healthy recipes.” 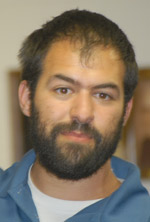 “All the recipes are comfort food recipes, but cooked a little differently. We do not use as much cream, (we use) low-fat milk, whole wheat flower, less butter, (we don’t) deep fry, (and we incorporate) more fruits and vegetables, and baking,” said Horovitz.

An example of making food healthier was the ranch dipping sauce, which included three cups of yogurt and skim milk instead of mayonnaise and regular milk. The salad contained tomatoes, cucumbers, shredded carrots, olive oil and lemon juice.

Appetite for Change has partnered with the Jordan Area Community Council for a community garden on 26th Avenue at Knox Avenue and is working on a project called The Healthy Corner Store Initiative, a project coordinated to assist corner stores in offering fresh fruits and vegetables and promoting consumption in the community

Community Cooks 2.0 is also in the works at Appetite for Change.

As the evening progressed, groups were created to discuss healthy eating options and what choices in the community would help drive this issue. One group stated healthy alternatives in North Minneapolis are few and that mostly everything is fried – an example being the multiple fried chicken establishments on West Broadway. According to the group, another factor was that healthier or organic foods cost more.

This was the first participatory cooking event hosted by CNA. The concept was encouraged by the neighbors and block club leaders to formulate an event for people in the community to get to know one another.

“The outcome for Appetite for Change is they get to encourage people to continue healthy practices in eating, and let people become aware of the work they do,” said Fine. “The outcome for CNA is more residents will go home having shared a meal and conversation with neighbors on the block. There are a lot of positive things happening and it really happens by neighbors encouraging one another and being supported by the neighborhood organization to get to know each other and their communities,” Fine said.

For more information on the Cleveland Neighborhood Organization, call 612 588-1155 or visit http://clevelandneighborhood.org/. For information on Appetite for Change call 612 655-6791, email info@afcmn.org or go to http://www.afcmn.org