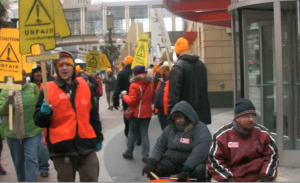 Last week, janitors represented by SEIU Local 26 got a new contract deal after 31 hours of negotiation. It included raises and secure health benefits. Retail cleaning workers, who clean for some of the same companies as the janitors do, can’t boast of such a deal. That’s why a small group of these workers walked off the job today in a “targeted” one-day strike during a week of action sponsored by Centro de Trabajadores en Unidos en la Lucha (CTUL), SEIU Local 26 and Take Action Minnesota.

According to organizers at CTUL, there are between 600 and 1,000 retail cleaners in the Twin Cities. An estimated 400 have signed petitions demanding better wages and health care. Some of them walked off the job today and took up pickets signs, drums and bullhorns outside the Target store on Nicollet Mall in downtown Minneapolis.

Janitors clean the offices of Target and many other Twin Cities businesses. Retail cleaners are the non-unionized workers we see late at night, scrubbing the floors and windows of the Targets and Kmarts we shop in. Those workers say they have been treated poorly, threatened with layoffs for organizing and say they have had their pay cut. Centro de Trabajadores says these same workers have been locked inside the stores during their shifts and the organization has filed complaints with OSHA.

“I been doing cleaning for 30 years (and) I make $15-16 an hour,” said Royce Reedon, a cleaner for Diversified Maintenance. He says he’s seen people’s pay lowered during his time there. “For the last few years, I noticed most peoples’ pay going down to $8 to $7.25 an hour,” he said.

Brian Payne, an organizer from CTUL, says that two workers who work for Diversified and Carlson Companies were threatened with termination for wanting to form a union. One worker was fired, but after a complaint Payne says was filed with the National Labor Relations Board, the worker was rehired.

“It doesn’t have to be that workers earn miserable wages,” said Payne. “It doesn’t have to happen that there’s these constant OSHA complaints about people being locked in stores. About lack of proper training. All of this could change. There’s enough money.”

It’s unclear as to what will happen to workers who walked off their jobs today for the strike. Payne hopes the companies these workers clean for will sit down with them for what he calls “‘an honest discussion.” Some, like Royce, say they don’t care if their job is on the line. They feel they’re doing what’s right.

“I’m not worried about my job,” said Royce, “I’m just worried about getting paid and the rest of these people getting what they need to go home and support their families.