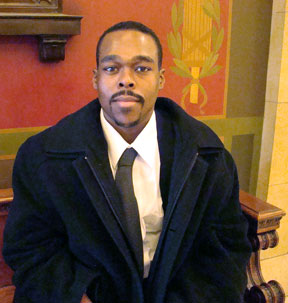 James Cannon admits he had a privileged life. With his father a judge and his mother a nurse midwife, he was afforded a private school education.  He secured a well paying job before graduating college, and was confident he was on the fast train to success. But one mistake changed the whole course of his life.

Just days before graduating from the University of Minnesota, Cannon went out drinking with friends to celebrate. Next thing he knew, we woke up in a holding cell, served a month in the workhouse and ended up with a gross misdemeanor on his record. He quickly learned how difficult it was to build a future when forced to carry past mistakes.

“This is not an issue of race, or of economic status. This can happen to anyone – your neighbor, your friend, your son or daughter – even you.  All it takes is one mistake,” said Cannon.

Cannon was one of hundreds who gathered Wednesday at the State Capitol for Second Chance Day on the Hill to raise awareness of the barriers faced by individuals with criminal records.  The event was organized by the Minnesota Second Chance Coalition, a nonpartisan consortium of over 50 nonprofits and businesses.

The coalition is spearheading two pieces of legislation this session to open up opportunity for ex-offenders to live, work and engage successfully in the community. 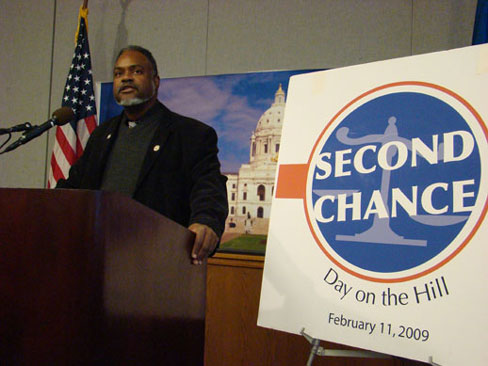 The Right to Vote

Senator John Harrington announced at the rally that he’s authoring a bill that will allow felons to vote.

“It poses no public safety risk, and in fact research shows that those who feel connected to the community, are far less likely to reoffend,” he said.

Sarah Walker, chief operating officer of 180 Degrees, and founder of the Second Chance Coalition, said the vast majority of Minnesota felons who are on probation or on supervised release are tax-paying citizens currently living in the community.  She said a common misconception is that it’s an urban problem that mostly affects minorities.

“While it’s hugely disproportionate in its impact on communities of color, 70 percent of 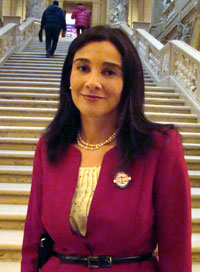 people convicted of felonies actually come from outside the metro. They are largely Caucasian, and mostly rural,” she said.

Another common misconception is that allowing felons to vote will sway the elections to the left. Walker said when polled, Minnesotans with felony convictions actually tended to lean conservative on social issues.

“This isn’t going to change the make-up of elections. What it will do is change people. It tells people that we want you to participate, we want you to be fully incorporated members of society. It sends a message of inclusion rather than exclusion,” she said.

Allowing felons to vote also eliminates thousands of dollars in voter fraud investigations. The issue of felons illegally voting splashed the headlines during the 2008 election.  But according to a Citizens for Election Integrity Minnesota report, after an intensive investigation, only 26 cases in Minnesota were charged – making up only nine ten-thousandths of one percent (.0009%) of the total voters.

“At a time that we’re looking at huge budget deficits, do we really want to spend our limited dollars investigating people who are trying to participate in the voting process?” asked Walker.

Harrington believes access to employment is also a significant part of the solution for integrating felons into the community. While he served as St. Paul’s police chief, his department implemented the Stop Armed Gang Activity program, and convinced one of the city’s most notorious gangs to put down their guns in exchange for a second chance.

“For the past 20 months, these young people have been gainfully employed.  To the best of my knowledge, since May 2009, they have not been involved in one homicide or shooting. Giving them a second chance has saved lives,” he said.

The other key legislation coming this session is known as “ban the box,” which would require private sector employers to remove questions about criminal history from their applications. Walker said Republican leadership has indicated that they want to focus on jobs, and this legislation provides one critical solution.

“It actually doesn’t cost the tax payers any money to do this, and the message it sends is if you are willing, and you are ready to change your life, and you are looking for employment, you are at least going to be granted an interview, and we will judge you on your skills and competencies,” Walker said.

The bill would not take away discretion of employers to choose who they hire, it just gives fair consideration to all applicants. The legislation would be an extension of the 2009 Minnesota law to “ban the box” from public sector employment applications.

Walker said the issue is a matter of urgency. Due to an explosion in the state’s criminal justice system, currently, 1 in 26 adults in Minnesota are felons.

Cannon likens his record to a “scarlet letter” that he’s been forced to wear. After 88 job application rejections, the first job he landed was through a church. He eventually took a position with Amicus helping ex-offenders with jobs and housing through a re-entry program. Through his personal experience and his work with others, he knows the barriers ex-offenders face in the community.

“We’re eliminating people’s opportunities to find employment.  So for the sheer purpose of creating a safer community, we need to alter the laws to reflect people being deserving second chances, and making employment more accessible for them,” he said.

De’Angelo Chester says there was a point in his life where he had done the wrong things for so long, that he almost forgot how to do the right thing. Two years into a five-year prison sentence, he finally made the decision to turn his life around. He attended parenting classes, underwent job training, and did everything he could to get ready for his return home.

Full of optimism when he was released, he quickly got discouraged.

“It was constant obstacles. Even though I had the proper training for the job, once I checked that box on the application saying I was a felon, I wasn’t getting call backs. I was getting ‘thank you, but we don’t got a position for you,'” he said.

“Without them, I wouldn’t be here talking to you today, because I would have lost all hope,” he said.

Chester says lawmakers should make the “ban the box” legislation a priority.

“We just want a chance to prove that we’re capable of doing as good a job as non-felons,” he said.

A father of three, Chester says he wants to provide for his kids – and for them look at him with pride.

“This not only helps us, it helps our kids. It gives us the chance to teach them lessons about working hard, about living life with integrity.” 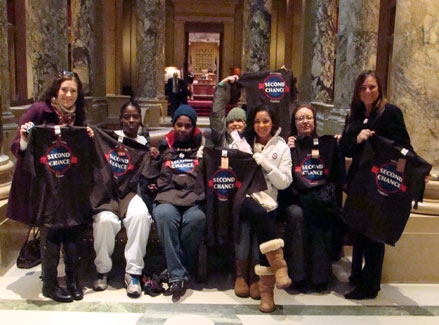 CORRECTION: James Cannon, who has a gross misdemeanor record, eventually took a position with Amicus helping ex-offenders with jobs and housing through a re-entry program.