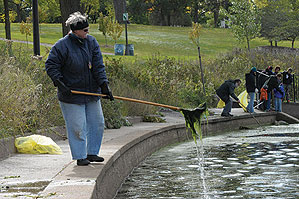 “How did all this trash get into the lake?” asked Hayley. The third grader was one of a small crew plucking litter out of Powderhorn Lake on a recent blustery Saturday. We hardy neighbors faced frigid winds as we extended our EasyGrab reachers and household rakes into the cold basin to pull up plastic bags, bus transfer tickets and soda straws.

Before I could respond to the bright child working beside me, Hayley answered her own question. “Sometimes people lose stuff,” she said, ” . . . or their parents didn’t teach them not to litter.” “Wow,” I thought, “Hayley, you get it!” Our conversation zig-zagged about what we were finding, how did these pieces get here, and why people litter. Just as I asked “How do think people can be taught to stop littering?” Hayley was called home. I was sorry that our conversation was cut short, but I mindfully forged on.

I raked in a heavy water-logged birdseed bag, some cigarette packs and many plastic soda bottles as I ruminated about trash during the lake cleanup. Pulling human-generated debris from rakefuls of more natural lake weeds, I thought about Hayley’s question. How did all this trash get into the lake? A childhood memory came to mind.

While on a Sunday drive many years ago, my parents pulled into the local A&W and treated my sisters and me to some ice cream delights. We munched in the car while passively watching the rural scenery drift by. Upon taking the last lick, I vividly remember asking what I should do with the wrapper. “Throw it out the window,” Dad said. “They do it all the time by our farm.” I was totally aware that my dad picked paper bags and liquors bottles out of his fields. He often complained about the thoughtless people. My parents kept a pretty pristine farm in the river valley. Despite the irony, I rolled the Chevy’s window all the way down and let the swoosh of the wind grab the cellophane and whirl it away.

A year or so later, Lady Bird Johnson, a rather plain, unassuming presidential first lady, recognized and took a stand against our nation’s apathetic carelessness. Despite resistance from the advertising industry and those who dismissed her, she launched “Beautify America,” a campaign to alter our slovenly behavior and teach good habits. “Ugliness is so grim,” Lady Bird Johnson said. “A little beauty, something that is lovely, I think, can help create harmony which will lessen tensions.”

Beautify America efforts cleaned up some of Washington, D.C.’s, and our nation’s, unsightly scenes by limiting the proliferation of billboards, junkyards and other eyesores along highways, and by planting more trees and flower gardens. “Don’t be a litterbug!” became a common slogan in the 1960s, and people like me it was not OK to throw away trash irresponsibly.

Lady Bird understood that untidy public places generated more than bigger piles of trash. She wrote, “Getting on the subject of beautification is like picking up a tangled skein of wool. All the threads are interwoven-recreation and pollution and mental health, and the crime rate, and rapid transit, and highway beautification, and the war on poverty, and parks-national, state and local. It is hard to hitch the conversation into one straight line, because everything leads to something else.” That pragmatic thinking in 1965 also applies in 2009.

The lake cleanup volunteers filled about a dozen big garbage bags in four hours of incredibly cold, windy weather. The floating algae of the summer had sunk to the bottom, the lake water was quite clear, and the heavy wind delivered any floating garbage to us on the southeast shore. “Soren and I noticed a LOT of dead catfish while cleaning up, which was concerning,” said Marcy Beckman. She and partner Soren Sorenson rowed the boat to the island and picked up all around its edge. “The bulk of the trash was candy wrappers, mouthpieces for cigars and plastic bottle tops,” said Beckman.

The October 10th Powderhorn Lake cleanup came about through online discussion on the Powderhorn forum, a subsite of e-democracy.org. Beckman wrote about seeing trash in the lake, people responded and promised canoes and waders, and Park Director Peter Jaeger outfitted the crew with garbage bags, EasyGrab reachers, a rowboat and lifejackets.

Perhaps our lake cleanup event, and those conducted by Friends of Powderhorn, could be the beginnings of a Beautify Powderhorn effort. “I would like to initiate some type of ‘keep the lake clean’ campaign in the spring,” said Beckman, ” … to teach kids and others about the importance of placing trash where it belongs.”

There are many components that lead to the trash in our neighborhood streets, park and lake. Maybe “Don’t be a Litterbug” could be resurrected in our grassroots effort and an adopt-a-block litter pickup campaign could be launched. Kate Norini, our longtime Powderhorn theater director, wrote and directed her students in “The Litterbug Rap” in the late 1990s and again in 2008. “Litterbug” was a new word but not a new concept to the young actors.

A clean park and lake, litter-free streets, park activities-they are all connected and interwoven with all the elements that keep a neighborhood healthy and beautiful. Young Hayley’s curiosity and grounded wisdom inspire hope that a young generation can be taught and led, and that we all learn, respect and remember.