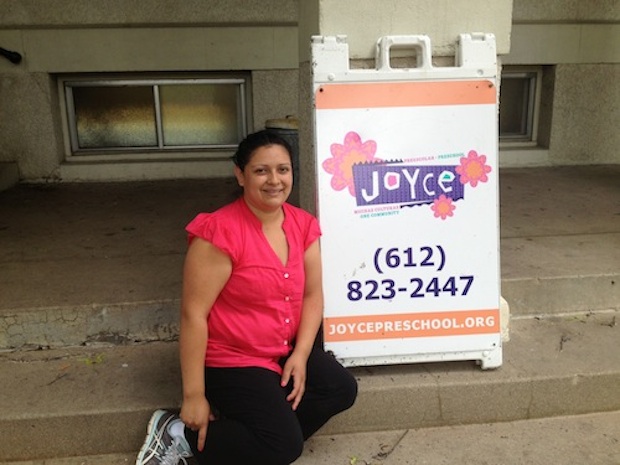 When educators talk about parent engagement, that can mean a lot of different things, some methods more effective than others. For Erika Boelk, an immigrant mother who had children at a young age instead of pursuing a career, the parent engagement at Joyce Dual Immersion Preschool not only offered her resources as a parent, but provided opportunities for her that allowed her to pursue her dreams.

Boelk emigrated to the United States in 2000 from Puebla, Mexico, when she was six years old, and in 2000 came to Minneapolis, where she graduated from Southwest High School. She married young, and didn’t fulfill her dream to go to college. That all changed when a partial scholarship to Joyce began a turn of events that has helped her rethink what was possible.

One of the reasons Boelk chose to send her first child, Itcel to Joyce Dual Immersion Preschool was because of their Padres de Familia program, which engages parents through discussions and training in parenting and leadership skills. “When I first got invited to the program, the first thing that was really nice for me not knowing anything about the school, I was invited to the Padres de Familia program,” she said.  “Everybody brings something to share and they talk about topics that affect minority people.”

Through the Padres de Familia program, Boelk took parenting classes, where parents learn about topics that they help choose. In the program, Boelk says they discussed getting a library card, and finding out where the food shelves are, as well as learning that if you disagree with a teacher, you can tell them you don’t like it. Boelk says she used the latter skill later for her daughter in elementary school, where some of the children were not being inclusive. Boelk was assertive enough to talk to the teacher, who hadn’t previously been aware of the problem.

The program contained a lot of family input, Boelk said. Other topics included banking, talking about discipline, or including more outside activities or eating more healthy, things that “make sense for other people,” Boelk said, but for the immigrant community, with so many dramatic changes, “it’s not always common sense.”

In addition to the parenting classes, Boelk was an active volunteer, helping the teacher with classroom activities and accompanying the class to the park and other field trips. She also helped out with cleaning, and eventually was offered a cleaning position at the school, at first once a week and then on weekends as well.

One day, a teacher at the school, Victoria Campoverde, told Boelk about an opening for a teacher’s aide position. “I told her, ‘All I need is an opportunity. I don’t want things for free or given to me. I want to work for them,’” Boelk recalled. “I graduated from high school and had kids at an early I age, but I felt I could do more.” Once hired as an aide, Boelk began taking CPR classes and early education training through the University of Minnesota Center for Early Education and Development program.

Now Boelke is taking courses at MCTC in early education, and next fall, she’s been promoted to a teacher assistant position. For her it means so much for herself, but also for her two daughters, that she’s able to break the cycle of not going to college. Boelk plans to continue on to the University of Minnesota after receiving her certificate at MCTC.

“I’m always grateful for my experience here,” Boelk said. The other teachers at the school are incredibly supportive, helping her drive her kids sometimes to play dates and going the extra mile.

Boelke isn’t the only parent that’s been hired at Joyce, which has recently hired other parents in different positions. While schools can’t hire every parent, the practice is one way to help better the opportunities of the parents in order to benefit the kids.